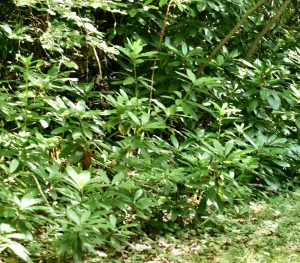 The difficult access and rugged terrain (in some areas) has helped to preserve these woodlands, plus they have not proved suitable for agriculture or ‘industrial forestry’.  Consequently, in many areas,  they have remained in their 'ancient state', going back to the last ice age.  Their sessile oaks are very important for wildlife but as they are not always productive of good timber, they have often been left to grow to maturity.  By the same token, Birch trees have relatively low timber value - which has been their salvation.  Woodlands like this were more extensive in the past covering the Atlantic fringe of Western Europe from North West Scotland down to the South of Portugal.  This type of woodland is rich in terms of biodiversity (primroses, violets, wild garlic, ferns and grasses) and some species are only to be found here and nowhere else in the world.

Sadly, like many woodlands, some of these woodlands have been invaded by Rhododendron ponticum.    When this shrub ‘invades’, it 'takes over' and the woodland floor becomes a dark and barren place.  The network of stems of the plant limit progress in any direction. In the image below, you can see the tangled mass of the Rhododendron. 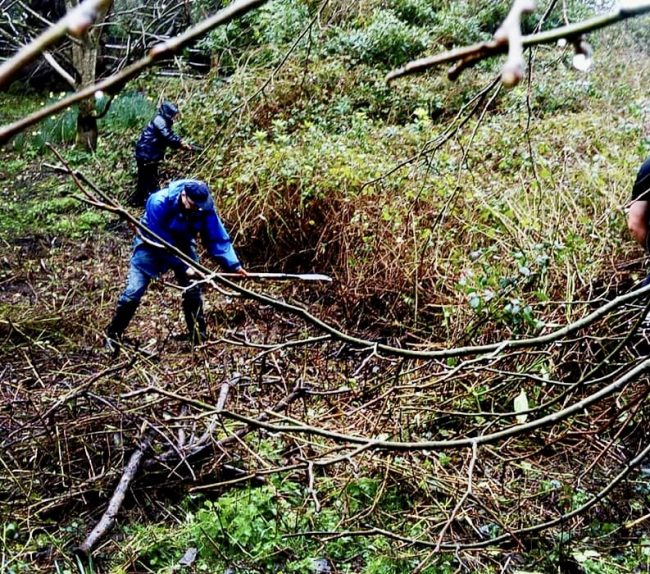 The Atlantic woodlands of Argyll, Kintyre and Lochaber (on the west coast of Scotland) have been investigated to see the long term effects of invasion by Rhododendron ponticum.  The researcher workers looked at plots of woodland that were 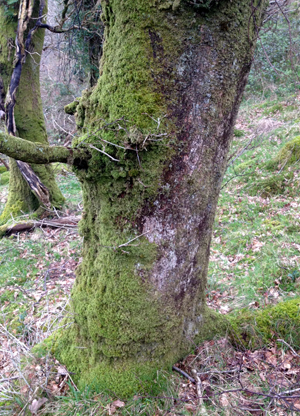 They found that, even after 30 years after the removal of Rhododendron,  the rich ground cover of the (uncolonised) woodlands had not returned.  Only mosses and liverworts had returned to the woodland floor.  Soil analysis revealed that Rhododendron colonisation had not changed soil acidity, nor nutrient levels and the carbon / nitrogen ratio too was unchanged.  The researchers suggest that the deep shade produced by the thickets of Rhododendron was responsible for the initial loss of much of the ground flora and that only certain mosses and liverworts remain, those tolerant of the reduced light intensity.  This mossy mat then becomes a barrier to the germination of flowering plants and grasses, so even years after the removal of the Rhododendron thickets the original rich flora has not re-established itself.  For this to happen, it may be necessary to remove the mossy carpet and re-seed the area with woodland grasses and plants (of local provenance).

Sadly, Rhododendron is a problem in many areas throughout the U.K. (some 800,000 hectares are affected) but it is particularly a problem in Western Scotland and Snowdonia.

I discovered a few stems of Rhododendron Ponticum in my ASNW and eradicated them by physically tearing out the root systems. This was possible because of the limited depth of soil and leaf litter on sloping solid rock terrain. Th Snowdonia National Park Authority has a comprehensive programme of eradication, and have resorted to glyphosate treatment where cover is intense. This will, of course, result in the problem of very delayed re-establishment of ground flora. Luckily, the abundance of bryophyte species including very rare occurrences may well be the saviour of the woodlands, but too much management and clearance of ground cover could well hamper natural regeneration.