When the Earth’s forests burned. 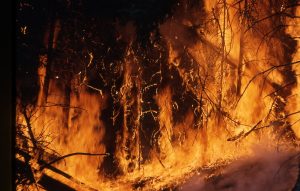 Some sixty six million years ago, much of the Earth ‘caught fire’.  A large asteroid smashed into the Earth (on the Yucatan Peninsula, Mexico).   The force of the impact has been estimated to have been a billion times greater than the force of the atomic bombs deployed at the end of WW2.   The impact of the asteroid and its effects were devastating, resulting in catastrophe on a global scale.   The event has been mainly associated with the extinction of the dinosaurs.  Immediate to the impact, rocks and material was ejected high into the atmosphere - as this material fell back to earth, searing heat was generated and fires were ignited; indeed, intense forest fires were ignited certainly across the Americas.

The flora of this time [the late Cretaceous] was diverse.   There was a range of ferns, cone-bearing plants (e.g. Pines, Metasequoia etc.) and Angiosperms - flowering plants / trees (like  Oak, Magnolia, Willows).   They offered food and a diverse range of habitats / niches for many animals and birds.   The plants also supported the most ‘iconic’ animals of this period - the dinosaurs; from the plant eaters (like the hadrosaurs) to (indirectly) the flesh eaters - ferocious carnivores.   The events that followed the asteroid impact contributed to the extinction of the dinosaurs - as might have the volcanic outpouring of lava and carbon dioxide on the Indian Deccan plateau.  The latter contributed to significant global warming; there was also significant movement of tectonic plates.

But it was not just the dinosaurs that suffered.  Studies of pollen and other plant fossil remains indicate that there was a massive loss / extinction of many plant species - one estimate suggests that over 50% of plant species were ‘lost’.

With the wholesale destruction of so much plant and animal material, there was a lot of dead and decaying material. This lead to a proliferation of decomposers (bacteria, fungi etc.), such organisms do not need light for photosynthesis.  After the impact, light would have been in ‘short supply’ as the material thrown into the atmosphere (and the smoke from the fires) would have blocked out much of the sun’s light.

The sunlight reaching the earth’s surface probably halved, reducing the photosynthetic capacity of those plants that had survived the impact, fires etc.   With reduced light at the earth’s surface, there were dramatic changes in climate (especially temperature) which affected plants and animals worldwide - including those in the oceans, such as the phytoplankton.   With the loss of trees and many other plant species, animals species (dinosaurs amongst them) were lost.  Forest and woodland canopies disappeared so there was nowhere for tree-dwelling birds to perch, feed or breed.  It is thought that the majority of tree-dwelling birds of this period became extinct though some of the ground dwelling species survived. It was these birds that would eventually give rise to the diverse assemblage of birds we see today.

The first plants to come back to the areas devastated by the asteroid impact were probably ferns.  Even today, after a fire, some of the fastest colonisers are ferns - as seen, for example, at St Helen’s Mount after the volcanic eruption in 1980.  Ferns don’t grow from seeds but from spores.   Spores are very small, so they can travel great distances and only need a damp spot in which to begin to grow and start the life cycle.    Studies have shown that immediately after the impact, there is a layer of charcoal and then lots of fern spores.

This mass extinction event occurred at the junction of the Cretaceous and Palaeogene era, and is often referred to as the K-T extinction event.  The K stands for Kreidezeit (german for Cretaceous or chalk period), and the T is an abbreviation for the Tertiary Epoch - an old name for the Palaeogene.  The loss of so many species (from dinosaurs, ichthyosaurs, ammonites, arboreal birds etc) was major extinction event.  It is sometimes known as the fifth great extinction in the Earth’s history.  The asteroid impact may not have been the sole factor in this extinction; the earth’s tectonic plates were on the move, plus there was a high level of volcanic activity in India.