Creating a woodland pond and encouraging pond life. ~ by Angus 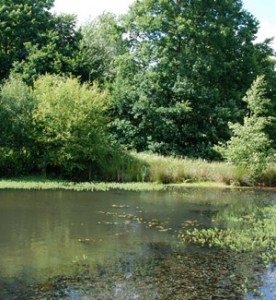 Pond building in woodland is more than just digging a big hole.   It is very much about creating a habitat, which is varied but which actually keeps the water in.  Over the last month or so, we have been digging a large wildlife pond in Kent not only for wildlife but also for enjoyment. We wanted an expanse of water that would be big enough for some canoeing and paddling around in small boats.

To do the job, we employed a pair of digger drivers with their machines but we were very much involved in the design and practicalities.  I knew several people who had dug ponds and lakes but in this case I particularly wanted something with an island; hoping that this could be a protected area for bird nesting - as well as an interesting feature.

Lakes and ponds silt up quickly as the watercourses feeding them are constantly carrying in material (material that is carried in to a system from another area is sometimes known as the allochthonous input*).   They need regular digging out to counter this shrinking effect from silting.  Where an existing pond is being enlarged or de-silted it is important, if possible, to do part of it at a time so that the pond life can survive the operation.

In establishing a new pond, much will depend on the soil type and some are much easier to establish than others.  For example, in Kent where clay predominates it is easier to dig out a new pond than in a sandy part of Surrey.  If you are digging a pond in a sandy soil you will need some sort of a lining - ideally clay - but one of the best sources of information may well be local digger drivers, who will know the ground better than any general guide can do.  But general guides are good too and one of the best is here and is part of Pond Conservation's project to create a million ponds over 50 years.

Ideally your pond should have some deep areas - this will give a refuge area of deeper water in case the pond level is lower in the summer - and gives a wider range of micro-habitats / niches for plants and animals.  The deeper parts of the pond will be home to different forms of aquatic life than the shallows, and they will give an area for fish and amphibians to hide from predators / lay eggs etc. 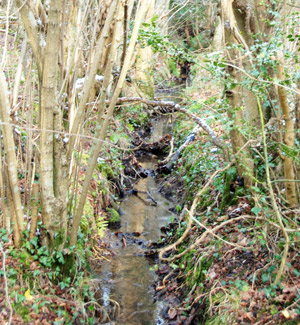 You will also need to think about your inflows.  We already had ditches running into our pond area so we cleared them with a digger, which took two days. We thought it was worth the cost of doing this as the water will drain much better along these into the pond for many years to come.  In order to fill our pond more quickly we also pumped in water from a nearby stream - I don't know if that's cheating but it works to get the water in quickly

Wildlife colonisation of your pond

Once you've finished digging your pond,  it may look a bit like a bombsite but don't be alarmed - it will grow over with vegetation very quickly and if, like us, you have an abundance of rabbits these will graze down the grass.  Wildlife will colonise both the pond and surrounding areas, there is always a 'seed bank' in the soil.  However, we helped the process along by spreading some grass seed and importing (local) pond weed.  Ducks are already visiting the pond and we are assured that they carry fish eggs on their feet which should at least get some fish established.  There are also some nearby ponds in adjoining farms and we expect amphibians and invertebrates to colonise our pond over the next few months.  For further information on pond colonisation - see DEFRA website 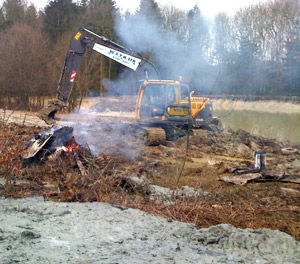 To dig this particular pond, we used a local firm with owner drivers but another option is simply to hire a digger yourself.  It is much slower work but is great fun - your respect for professional drivers quickly increases as you appreciate their great speed and dexterity in operating pond-diggers and you realise that experienced digger drivers also have brilliant and clever techniques for effective earth moving and for stopping their machines getting bogged down.  But be careful: these are dangerous machines and you particularly don't want to be driving it while there are people are on foot nearby.

We've recently constructed a canoe and are looking forward to trying it out in this pond (which we are calling a mini-lake!) as soon as the mud dries out and the banks grass over.  The spring is coming just in time....

* the allochthonous input of a stream or pond can be sediments carried down (in streams / water courses), or leaf fall material blown in from adjacent areas, the carcasses of dead animals etc). 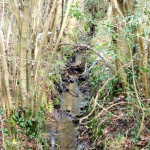 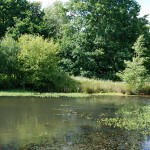 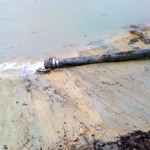 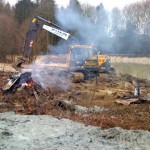 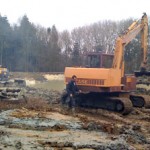 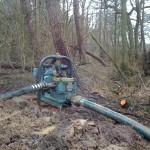 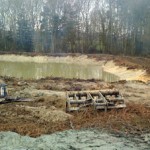 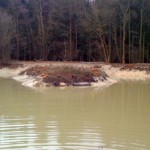 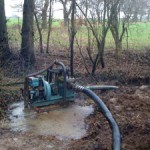 […] One approach to pond building has been described in the blog,  this year. […]

I built a pond a few years ago. Had to use some PVC lining which was hard to disguise especially on steep embankments. Was there no need to line your pond? Is your ground water level so high or are you just accepting leakage because your pond is connected to a stream?

What was your budget, may I ask?

Anyway, judging by the pictures, it looks like a great job!!

A lovely article, Angus. We had the director of Pond Conservation involved in the creation of ponds in our woodland. One point he made was that if you don’t have to create a huge pond (and clearly you wanted to do boating, so you need a large pond for that), then it is better for wildlife and biodiversity to create a series of small, but linked ponds. This allows the maximum number of ecological niches to develop – we have found linked ponds have very different characters that would not develop were the ponds merged into one. Also, you might need an abstraction licence to take water from a local watercourse – check Environment Agency for information about this.