Restoring an old lake ~ by Dick 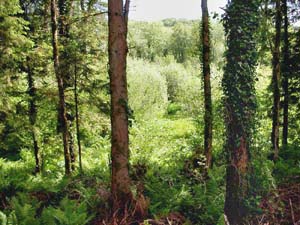 In an earlier blog post by Angus (January 2013), he discussed the pros and cons of dredging ponds and lakes.   In this piece I shall describe some of the practical aspects of carrying out the work and some important lessons I learned along the way.

Background to the project.

We had acquired a new area of woodland in my region and I was familiarising myself with ‘my’ new wood, noting down work that would be required before we could offer any of it for sale. One particular area troubled me; around 2.5 acres of very unkempt, scrubby land with just a few poplars surviving and many more dead trees. This was in complete contrast to the rest of the woodland which was all very well managed. Closer inspection revealed boggy conditions underfoot, with numerous pools of water. Having consulted old maps and woodland plans I discovered that this area had once been a lake of around 2 acres.

At some time, under a previous ownership it had been decided to drain the lake by making a channel out into a nearby river. The area had then been stocked with various tree species, but this was not a success, mainly because water continued to accumulate since the lake was located below a long, wooded slope. So, the decision was made to re-instate the lake, but on a smaller scale than the original.

Step 1 was to clear all of the scrub – mostly willow – which had established itself. This required a local contractor with two specialist bits of kit: a tracked chipper so that the arisings could be chipped ‘in-situ’ and chainsaw waders – a weird hybrid of chainsaw boots and chest-waders. 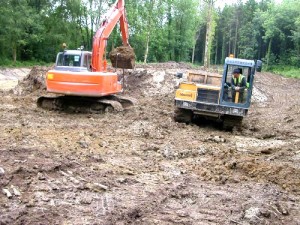 Once this step was completed, the heavy machinery moved in, namely a 7.5T digger and a large, tracked dumper. Although the dumper looked like a fairly hefty beast, it was surprisingly nimble and didn’t sink at all, unlike the chipper! At the start of this phase, the top layer of earth from around the lake was scraped off and carefully set aside, to be later spread back around the lake, thus preserving the seeds and plants within it.

All ‘waste’ was redistributed on-site, so there were no tipper lorries churning up the tracks (and using up fossil fuels) transporting waste off-site.

Once the bank sides had been profiled, with shelves and shallow areas to aid access for birds, mammals and amphibians, the final phase was to block off the original drainage channel, with marine-ply shuttering and lots of earth.

Then all we had to do was sit back and wait for the autumn/winter rains to do their worst – and they certainly did that!

Although I had been involved in lake digs before, this was the first time I had ‘project managed’ one and I learned several valuable lessons:

Any project like this should not be underestimated. It involves significant cost & a lot of time. But careful planning and a clear idea about what you want to achieve can minimise costs and add much to the bio-diversity of the area, benefitting wildlife and people too. 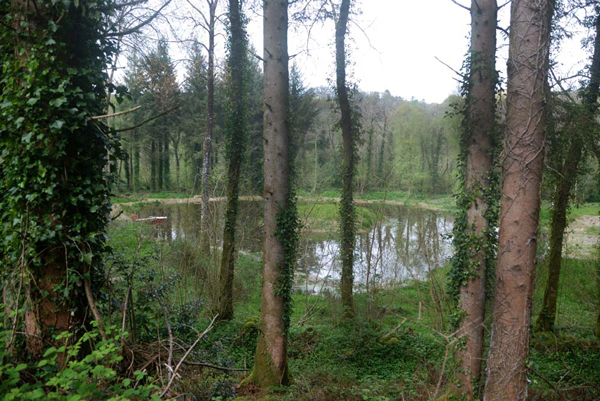 If you would be interested in owning the area of woodland containing this lake, visit: https://www.woodlands.co.uk/buying-a-wood/cornwall-and-west-devon  and look at the details for Old Lake Wood.

[…] The soil seed bank refers to the various seeds that are ‘stored’ in the soil of most ecosystems.  Soil seed banks have always attracted interest because of the ‘reservoir’ of weed seeds in the soil and the economic implications of these.  However, more recently ecologists and conservationists have looked at the role of seed banks in woodland and forest regeneration; and it may be that they can play a role in the rehabilitation of degraded ecosystems. […]