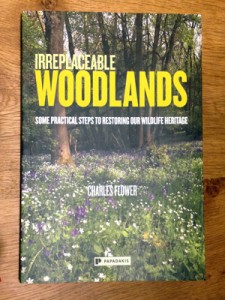 irrCharles Flower inherited a 25 acre Berkshire woodland a generation ago and had a vision for its restoration.  He points out that, "small amounts of management, particularly in rides and glades where most flowers and insects occur, can yield enormous benefits."  What shines through Charles' book is that he learnt almost everything about woodland management on the job as so many buyers of small woodlands do and this approach did the wood no harm at all.  Indeed, as he says, "it is only when you have the privilege of really getting to know one of these ancient woodlands that you become aware of their importance .... these woodlands are literally irreplaceable."

This new book is as much a viewing as a read - Mike Bailey and Steve Williams have illustrated the book copiously with pictures depicting how a well-managed woodland can look and also showing management operations in progress.  But the story is an odd one - Steve and Mike were helping Charles Flowers with his earlier book ("Where have all the Flowers gone") when they found out that he owned a woodland and they started photographing his wood just for fun.  The photos were so inspiring that Charles decided he should work with the photographers to tell his own "woodland story".  It is a treat to have this book in your home but it is much more than a coffee table book - it really does contain practical steps to restoring ancient woodlands.

In terms of trees, Charles follows previous generations of woodland managers in concentrating on Oak, Ash and Hazel which would have provided the essentials of medieval rural life, and in his own wood (Mapleash Copse) he has developed clear, practical steps to promote biodiversity.  The first appears as a negative - exclude deer, grey squirrels and other invasive species.  Next, he wants a mixed woodland to be mixed in age as well as species and he took advantage of a bad storm in 1990 to increase the age-mix of his trees.   Another strategy he has adopted is restoration of rides and glades and he has deepened the ponds in his wood to help many species, including the mallard and frogs.  Enterprisingly he has also intervened with his wild flowers by taking seeds from one area of the wood and planting them in another, giving, as he puts it, "wild flowers a helping hand".

His name is, of course an aptronym where his name is very apt - Charles Flowers is particularly concerned to promote his woodland's Flowers!  He also devotes a chapter to establishing wild flowers in new woodlands but he bemoans the wasted opportunity in the new woodland planting that is taking place across England - he claims that most newly planted woodland is devoid of wildlife which is a "giant missed opportunity" and could provide the perfect breeding ground for wild flower diversity and for associated insects and birds.  It's a "giant opportunity" because we've planted so much new woodland: over the last 20 years we've established more than 85,000 hectares of new broadleaved woodland in England which is a larger in area than the combined nature reserves of the English wildlife trusts.

After reading this you probably want to meet the man who is doing something more difficult task than just planting trees - he is managing them and actively promoting the interests of wildlife.   Actually you could meet him by going to his book signing at Hungerford Bookshop on Tuesday 11th November.  Or you could just buy his book online - £17 on several websites - just search for "Irreplaceable Woodlands".