You are here: Home > Blog > Practical Guides > A tale of two saws

A tale of two saws ~ by Nick Reckert 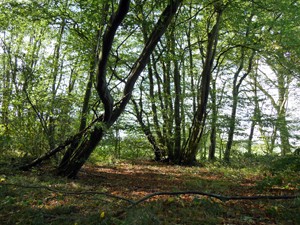 A few years ago I bought six acres of neglected coppice-with-standards: oak, ash, hazel, sycamore and birch. The coppice-stools are tangled and overgrown, and the standards are tall and bare-stemmed. My aim - to coppice the wood systematically for domestic fuel - dictated the equipment. I’ve never liked chainsaws, so planned to use hand-tools only. Since my wood-burner gobbles up to 15m3 of logs a year, and I work alone, am in my mid-60s and have had a quadruple bypass, this may have been ambitious.

I used bow saws at first, but they were too clunky to fit into crowded hazel stools, and kept wandering off course in thicker trunks. Geared loppers are great, but only for clearing the thin stems which, in my wood, go straight into the brash pile. I tried a Bahco pruning saw, but its blades kept bending or snapping, and a magnificent Finn-Garlick crosscut saw, but for single-handed sawing it was a non-starter. Finally, having heard good things about their admittedly expensive saws, I decided to splash out on a Japanese-made Silky. The model I chose was a 30cm Zübat with a wicked-looking, curved blade. (Price: about £59.)

What a revelation… The Zübat is stiff enough to poke into the most stubborn tangle of coppice stems. It cuts only on the pull, so you’ll never buckle it. It's scarily sharp. You haven’t really experienced a Silky until you’ve drawn blood at least three times. The geometry ensures that as you reach the end of your pull-stroke the curve progressively compensates for your fading blade-pressure, so you finish the cut at full strength - brilliant! And the teeth, which are cut into a complex pattern, just last and last and last - which is good, as a new blade isn’t cheap. With a little cunning, the Zübat will fell trees up to 35cm diameter (14”); beyond 35cm I sometimes use a Silky Katanaboy, but that’s another matter.

The Zübat is worth every penny of its price, but it’s still not perfect. Here’s a niggle: you can’t sharpen it. Actually, I wouldn’t even want to. It’s a miracle of design and engineering, and I’m not going to mess with it. Also, the curve has one disadvantage: to fell a bigger tree with real accuracy, you want an exact notch-cut and a perfect hinge, which you can’t quite get with a curved blade. If that matters to you, Silky does a straight-bladed version of the Zübat, called the Gomtaro.

But here’s the rub. Felling and logging with a hand-saw, then splitting the thicker logs with a maul, and then carrying 15m3 of logs out on my shoulders started to get tiring. I would have to buy a chainsaw after all, it seemed.

For several years I'd watched the development of Lithium–Ion battery chainsaws, and it seemed that they had got to the point when - for certain jobs - they were competitive with petrol-powered saws. After much 'Googling', I bought a 36v 14-inch Stihl MSA200 C-BQ (price, about £245 - £295) with a 6ah battery (£180). Again, expensive, but I liked the quality and the thoughtful design, and all the reviews suggested it would last. 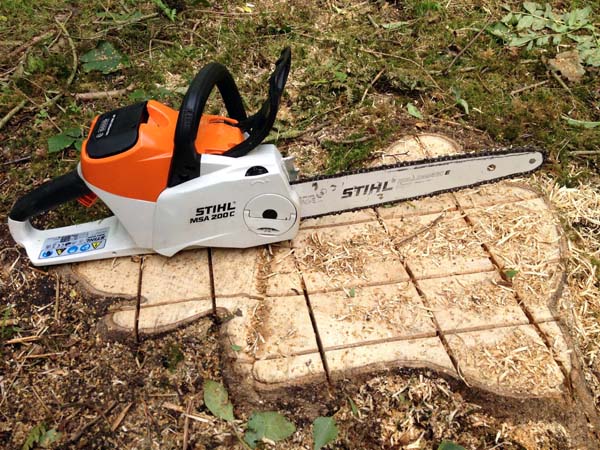 Why would anyone choose a battery-powered saw when petrol ones are proven and well supported? Several reasons:

One has to respect the MSA200’s power limitations: in a deep cut, if it starts to slow, I back out slightly and it instantly picks up speed. Also, it doesn’t like doing bore cuts; not in hardwoods, anyway. But Stihl have cleverly given it a very narrow bar and chain, so the power isn’t wasted on a wide kerf. (Another benefit of the narrow chain is that it sips oil very frugally.) The battery gives nearly an hour of cutting, which for me equates to about three hours’ work - about as much as I want to do at a time. I charge it overnight, and it seems to hold its charge indefinitely. The simplicity of a battery saw is a revelation: just press the trigger and off you go, and no messing about with leaky cans of premix, oiled-up plugs, unreliable starting and so on.

You may think I now use the Stihl all the time, but I don't. It comes out for the larger trees, or when I’m pressed for time. For most coppicing I actually prefer the Zübat. It’s even quieter than the Stihl, so I can hear the buzzards overhead. It takes a little longer than a chainsaw, admittedly, but that stops me from rushing any difficult cuts. Importantly, using a one-handed saw leaves my other hand free to feel the tree as it tells me what it wants to do, and to steer the fall or relieve any pinching. In short, the Stihl battery saw is my concession to occasional necessity, but the Silky is a pure pleasure to use.

This combination of saws won’t be right for everyone, but for my specific routine of small-scale wood-fuel coppicing it works very well. For hard-core foresters and arborists, it won’t be long before battery chainsaws move into the mainstream. Batteries are improving all the time, and if consumer-level manufacturers are anything to go by - like Ego, with their 56v model, and Greenworks, with a stonking 80v machine - then the full-fat professional models can’t be far behind.

I had completely forgotten about this article, and have only now re-discovered it.

Mr Harvey, If my comma before a conjunction in that sentence has caused you distress, I do apologise! I worked 20 years for Cambridge University Press, and every publishing house has its own favoured styles. If you haven’t yet tried a battery chainsaw, you may find the almost complete lack of vibration a surprise and a real benefit to your shoulder.

Mr Bowles, you’re right about 15m3 being an awful lot, but I heat water and seven radiators as well as providing radiant heat to a living room, thanks to my wonderful Esse 350 GS inset stove. Also, my house is stone-built, poorly insulated (despite my best efforts), and situated on top of a wind-blasted 100m escarpment in North Yorkshire. Fortunately, I’m still fit enough that I actually enjoy cutting that much wood.

Shirley Chaplin, I’m really pleased you found my article useful. What I always say to friends who are considering buying woodland is that in most cases you don’t actually need to do >anything< to manage it, because it has been getting along pretty well for 20, 30, 40 years without input. So you can certainly manage on your own, by simply doing as much or as little work as you want to. I do hope you now have your wood and are enjoying it.

Sorry the original article was by Nick Reckert not Mr Harvey – although yours was entertaining as well in light of where I work.

Thank you Mr Harvey for your wonderful and instructive article about Silkys and battery powered chainsaws. I am a single female of a certain age (just) who is contemplating buying a piece of woodland in Wiltshire and the information contained in your article was not only very useful and instructive but has helped to ease my mind as to whether I could manage on my own (having lost my partner last August). I am off to look at two pieces of woodland on Sunday so fingers crossed and many thanks again.

What a great little article and really useful. Firstly, 15M3 of woodfuel for a year is an awful lot. He must have a very big house with water heating or just a lot of burning time. I don’t have a stove but burn about 3M3 or so on an open fire. In addition I am burning Birch which dries quickly but also burns faster. We are cutting to cordwood in our wood with a mate’s petrol chainsaw and then transporting home to cut into circular logs with a B&Q electic chainsaw. (under £100) We have so much Birch in our wood(s) that we tend not to bother with any coppicing but a local wood to our home obviously is also quite keen on coppicing and has neat little piles of small dimension stuff awaiting removal

When I ‘saw’ the title of the article, I had to read it…and am glad I did – very well thought-through and well-written (apart from the use of commas before conjunctives!!). Having been almost 30 years since I was working in arboriculture, I am in sympathy with the writers approach to chain-saws (and noisy/smelly machines in general) which seem at odds with the tranquility of the woodland setting but now I am of a similar age to him, I also sympathise with the physical constraints of later-life and, having decided in the New Year to prune my garden trees and shrubbery by loppers, bow and pruning saw, I am still in considerable pain in my shoulders. Perhaps a biddable Beaver is the answer?