You are here: Home > Blog > Energy, sustainability & economics > Are watermills economically viable and could they work in woodlands?

Are watermills economically viable and could they work in woodlands? ~ by Angus 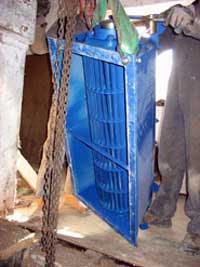 Each year an enterprising group of mill owners organises a tour of watermills in South Somerset on a Saturday in February and again in the autumn.  I was lucky enough to be invited to go on this hydropower tour a couple of months ago, though you can organise to join it through Brian Shingler who can be contacted through www.gantsmill.co.uk.

Our hydropower tour included three types of watermill: a traditional wheel,  Archimedes screws and crossflow turbines (see photo).  Each of these has its advantages and disadvantages - for example the crossflow turbine needs a good screen to protect the fish whereas the Archimedes screw allows the fish to travel down unscathed (even if they do get a bit dizzy!).  In all cases there has to be enough water.  Sounds obvious but actually it isn't so that before any installation is installed proper measurements have to be made to make sure there is enough flow and enough of a fall.  In France, feasibility studies are grant-aided as a way for the government to try to "pump prime" the development of modern hydropower generation.  Another non-obvious issue is how seasonal the flow is.  In some cases, where local rainwater is feeding the river, the flow will drop sharply in the summer and a hydro mill can only really work efficiently for a few months of the year.  In other cases where it is fed by spring water or it is on a year-round river, it can generate electricity throughout the year.

On the mills tour, we were struck by one line which recurred at many of the mills, "this site has been here since the Domesday Book survey of 1086".  The sites that were good for water power a thousand years ago are, by and large, the same ones that are viable today even if technology and environmental concerns have changed a lot.  One of these ancient sites was Hewlett's Mill at Galhampton where there is a waterwheel with 54 buckets.  Here the flow is relatively small but the head (or "fall") is about 4.3 metres.  The annual output here is only 7,000 kw hours but it makes a very attractive feature and reduces the amount of electricity the house has to buy from the local electricity company.

The UK government has committed itself to encourage the production of 15% of energy from renewable sources by 2020 so as well as biomass, tidal, solar and wind power there are incentives for creating hydropower.  These incentives were previously either in the form of grants towards installation costs or a subsidised rate paid per kilowatt hour produced  but are now in the form of a feed-in tariff, which means that all the electricity you generate, whether you sell it to the local electricity company or use it to reduce your consumption, you get paid a higher rate than consumers actually pay for electricity.  This is cost-neutral for the government because it is funded by a slight increase in what general consumers pay so that there is a small cross-subsidy from the users of "dirty power" to those who produce renewable power.   In the case of the Gants Mill turbine (the production is mainly computer controlled and about 10 kilowatts is produced, so that in a typical year about 30,000 kilowatt hours are produced which yields about £4,500 per year to the owner.  His capital cost was about £26,000 which was half paid for by grants but the project is not quite as attractive as that might make it seem in that the owner needs to keep a constant eye open for times when the river gets above its usual level and in the autumn he needs to clear the filter about once a day.  A 10m screen is used to keep the fish out but it does collect twigs and leaves at a remarkable rate on the river Brue.   The flow rate in this case is about 1/2 cubic metre per second.

Whether a hydro project could be economically installed in a woodland or open fields will depend on several factors.  The flow of the river, the fall and which sort of generation equipment is envisaged.  Some companies will carry out feasibility studies with a view to installing the equipment for you and doing a profit sharing deal and for many such deals the feed-in tariff will have made the economics more attractive.  One problem which the micro-hydro industry faces is that installers have to be certified and the government doesn't yet know what it means by this.  Probably these rules are mainly in place to regulate solar panel installers but in any event the suppliers and government are working on a compromise to make sure that new micro hydro generation can be installed.

Another challenge facing anyone wanting to install a turbine, wheel or screw in a woodland is that the environment agency have to be fully consulted and their concern will be wider than just whether the economics stack up - they will be concerned about the ecological impact on the river and ways to make sure such impact is minimised.  Still, if you have a good flow of water it is well worth investigating and going on a South Somerset Hydropower Group hydropower tour will show in the most practical way what other site owners have been able to achieve.

Posted in: Energy, sustainability & economics, Woodland Activities ~ On: 26 May, 2010

I am buying a small watermill in France and would love to know if it is possible to generate electric power. If anyone has the interest to write with any information to assist a total novice, who is very enthusiastic, please let me know? The mill is fed from water introduce from the main stream and then returned there afterwards through the sluice. I am told water level throughout the year is constant. All the mill gear is still in the milling room. There is no lake, but a series of canals.

It would be marvellous to be able to produce your own electricity from hydro, but most of us don’t have the necessary water situation. I envy you if you have.
Have you seen the Sea Mills on the Ecotricity web site. They look such a good idea! They say that electricity could be cheaper to produce than using oil or gas or nuclear,and is carbon free. It uses the motion of the sea to drive seawater through tubines which make the electricity. Well worth a look.