You are here: Home > Blog > Practical Guides > Communicating through a note on the windscreen

Communicating through a note on the windscreen ~ by Angus 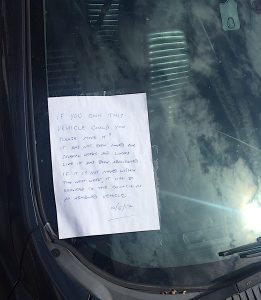 Woodland owners can be enraged by finding a note on their windscreen.  Most people have got used to texts and emails and even speaking directly, but the note on the windscreen is an art form of its own and one that presumably goes back well over 100 years - perhaps even back to the Egyptians of you include the note left on a chariot seat.    These notes can be very helpful ("I've left that fiver I owed you under the front wheel") or distinctly rude ("don't park in front of the gates - next time I'll let your tyres down"). In most cases this is one-way communication,  so the car owner has the frustration of not being able to answer back and often you don't even know who has left the note.  Surely this anonymity encourages people to be much ruder than they would be face-to-face, a bit like the phenomenon of the abusive posters on online message boards.

Windscreen notes often relate to where people have parked, with woodland visitors sometimes blocking access tracks.  It's understandable that people block the space outside a gateway because of two competing pressures - the need of the car driver to get off the road and the desire of the woodland owner to leave as little space as possible for fly-tipping.  The fight against flytipping is also often the reason for the gate into a woodland to be locked so the driver can't drive in.

Almost everyone can remember a time when a note on their windscreen brought them up short.  Even better is when a note on the windscreen uses humour to achieve a result, such as the note which said, "you are very brave parking your merc so close to my smart car which I don't give a s**t about" or this one, "yo, I hit your car and I'm leaving this note coz someone's watching ... they still are ... ok, they've gone and I'm off too."  Often these notes are about poor parking such as this one: "learn to park with manners - you must think I'm a bloody sardine" or "your new year's resolution should be to go on a parking course".

Perhaps the way to deal with blocked access track is for every car driver to put a note of their mobile phone number on their dashboard, which is of course a sort of pre-emptive windscreen note of its own.  It wouldn't reduce road rage but it might at least reduce "parking rage". 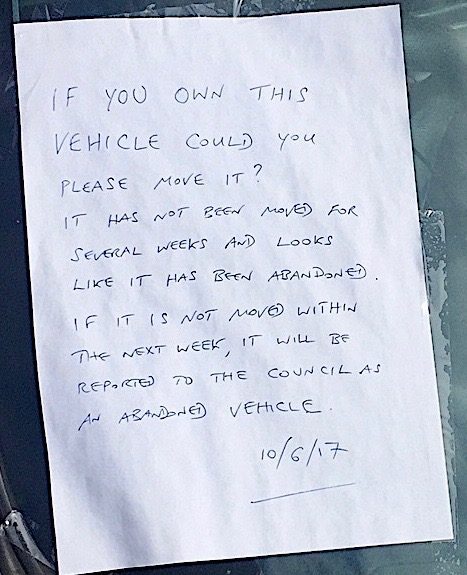 agree with Peter the message here seems to be for the sake of writing something to fill a page,
and if the vehicle had been parked for weeks and abandoned well done for reporting it to the council

Maybe I’m missing the point here but why would anybody leave a note of objection on the windscreen of the vehicle of the landowner parked on his own land, presumably…..?