Finding antiques in woodlands ~ by Angus 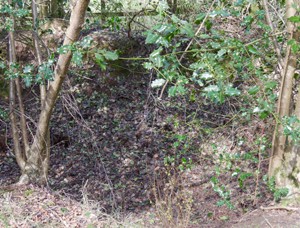 Treasure! I clambered up from the woodland pit with a bottle that to me looked very old, beautiful and probably precious. I'd been curious about what was at the bottom of one of those steep-sided holes in the middle of a woodland. It turned out to be ancient rubbish from many decades ago and my bottle was part of that - no plastic in those days, just some glass bottles and rusty metal. I went back down and found an old enamelled vase with rust-made holes and I knew it would look much better after a spin in the dishwasher - if I could sneak it in without objections from the family!

My newly-discovered bottle was square with lettering on the side so I took it home and washed it revealing the words, "ESS CAMP COFFEE & CHICORY" on one side, and on the other side the text "GLASGOW" and "PATERSONS". So putting these words and "bottle" into the Google images search revealed that what I had found was about 105 years old, and the ESS stood for "essence". A beautiful object maybe, but obviously not unique.

Woodlands are like living museums - they often contain old trees, earthworks and objects of historical interest but they are also dynamic places with growing woodland, exposed to the elements and picked over by walkers and explorers. Many woods are used by metal detecting enthusiasts who should get the owner's permission to forage, but they can then search for buried treasure. But you can find a lot without a metal detector - it's amazing what you can find by just climbing down into old holes. These pits themselves are of historical interest - some will have been dug as saw pits, some created by geological causes, some for drainage and occasionally you will find one created by a bomb that was dropped in WW2. On earlier explorations I did find a small unexploded bomb that was potentially dangerous and was eventually taken away by a bomb disposal team, but that's another story, and it definitely wasn't something we could put on the mantelpiece at home.

Actually my family have grown quite used to seeing the results of my foraging and on one of our shelves we have a small collection including an old milk bottle from the 1970s, some ceramic insulators left by power line contractors, and several skulls from badgers, sheep and foxes. Perhaps bones are nature's equivalent to man's metal and glass remains - objects that last a long time and tell a story. In the case of the bone pictured here you can just make out the teeth marks from a badger who was probably eating the marrow. 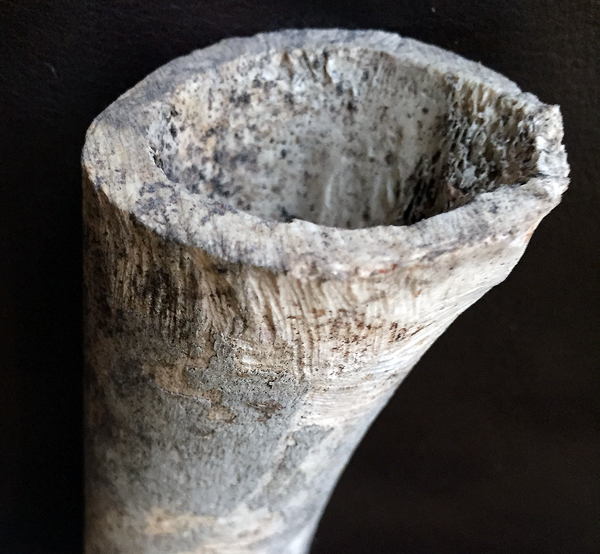 But searching online to find out more about my old coffee and chicory bottle, I found the equivalent on eBay for £5- £6 from various vendors including one called 'found underground'. Not treasure, after all, but a good addition to the collection.

Black Pepper’s gravestone
It was good to see that Colin Lavery and others are interested in the gravestone carved Black Pepper which is in Mill Bank Woods, Kildale, North Yorkshire. I live nearby and am enquiring through the local history society for more information. The landowner says it was a horse that died and further information will be forthcoming hopefully.

RE: an earlier article I wrote on this website, I have now placed a small sign next to BLACK PEPPERS GRAVE in Millbank Woods Kildale. It is right next to the path and at ground level. I am pleased to see a small path is beginning to develop to the gravestone. My sign is homemade and will not last forever. It would be really nice if a more permanent sign could be installed, after all this gravestone is a part of the history of the ESTATE and Kildale village.
Colin Lavery ABERDEEN

In regard to Colin Lavery’s comment about Black Peppers grave in Kildale woods I did stumble over this after seeing his nice sign. This has intrigued me. Who or what was Black Pepper? I could not find a date – how old is the grave?

When I was a young boy I knew of Black Peppers Grave in Millbank Woods near Kildale. 55 years later I returned to see it, (I live in Aberdeen) and found it had virtually disappeared under years of sediment and about to be lost forever so I dug out the sediment and it now stands proud again. I have made a professional looking sign which I intend to install nearby at the side of the path at the end of July 2019 when I will visit the area on holiday. When this is installed I will contact the local history group and hopefully the grave will be back on the radar for years to come. I would invite communication with any interested parties as the restoration of this grave has become something of a passion with me.
Colin Lavery ABERDEEN

I remember drinking Camp Coffee as a child, though not 105 years ago. It was still in a square bottle, and I believe it had a picture of a soldier on the label. I have a bottle found at Vimy Ridge that was given to me by my French guide and friend last year, from his collection of artifacts, with strict instructions not to wash the 100 year old mud out of it. It is about 8 and 1/2 inches high, bulbous with narrow neck, and a slight greenish tinge, it has SCHWEPPES in capitols down one side, and BY APPOINTMENT TO THE KING AND PRINCE OF WALES on the other side. On the bottom it has K.B.Ltd G 3 2

This may sound like a strange request, so let me introduce myself: My name is Keith Levitt and I live in Tywardreath, having moved to Cornwall around 25 years ago. I am 60 years old.

I have been engaged in the hobby of metal detecting for a number of years and find it a healthy, enjoyable pastime that allows me to meet many interesting people. I have a keen interest in History and the thrill of finding old coins, buttons, etc. is very exciting to me.

I contacted Dick White the local manager for Woodlands.co.uk and he suggested that I put up a request as a message reply to the blog article. I am posting this message to see if there are any woodland owners in the Cornwall area that would be prepared to let me detect their woodland. I am prepared to travel so anywhere is possible

I want you to understand that I always respect the property that I search and try to leave it in the same condition that I found it. Normally the targets are no deeper than 4 or 5 inches and I retrieve them such that the ground appears not to be disturbed. Any trash found will be removed and taken away by me. Also this would be solely for my use and I would not be bringing anyone else with me.

I am a full Member of The National Council for Metal Detecting and am covered by full Public Liability Insurance.

In addition, I would like to offer my services to you. Perhaps you or someone you know has lost a valuable ring, a cache or a farm tool. I would be willing to assist just for the thrill of the search.

If you have any questions please let me know. I would be happy to meet with you if further discussion is required.

Thank you for your time and consideration.

While coppicing, we found a brick structure with a paving lid covered in tree roots. It must have been an old well as the marsh below it has a constant stream of slow flowing water.

In my eighty years ii have walked in many wood,s and know the thrill of scavenging. Kildale wood,s for example we found the grave of a horse called black pepper that as sixty nine year,s ago .you are never to old .