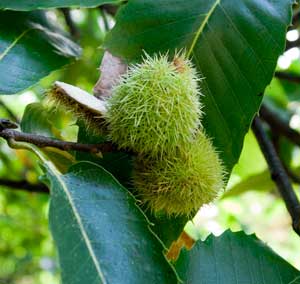 Now is the time to be collecting your sweet chestnuts.As the October winds get going, there will plenty more of them to collect from under the trees.    Don’t confuse them with horse chestnuts (conkers), which are inedible. You can see pictures of the sweet chestnut tree in the Woodlands.co.uk Tree Identification Guide.The hedgehog-like cases are covered in long, pliable, green spikes.  Split open, they contain 2-3 shiny, roughly triangular nuts with a distinctive tuft on the end.

Although the European sweet chestnut originated in Greece, and is therefore not strictly speaking native to this country, references to the nuts as a foodstuff are found from ancient times.The Romans planted trees across the empire, explaining why “castan” (the Latin word) appears in various versions throughout Europe, for instance “castanwydden” in Welsh, “kistin” in Breton, “châtaigne” in French and “chestnut” in English. 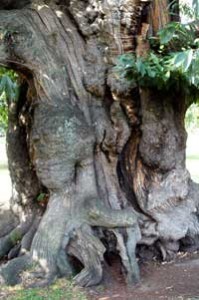 Chestnuts are not like other nuts.   They have a mealy, floury texture and are mostly carbohydrate, unlike most nuts, which are protein-rich.  Where land was not suitable for cultivating grain crops because it was mountainous and/or forested, the nuts were a valuable food source and were ground into flour.  Chestnut flour is still used in rural French and Italian cooking to this day.   It is also worth noting that chestnut flour has no gluten and is therefore suitable for a gluten-free diet.

Assuming you’re too hungry to go to the trouble of milling your nuts into flour, what do you do with them?   The sweet chestnut tree is very high in tannins and some people say the nuts are too bitter to eat raw.  I’ve nibbled on a few straight from the shell and haven’t found this so, although perhaps a bit indigestible if you ate more than a couple in one go I think.   Cooked, they taste slightly nutty and fairly bland, but they work well as bulk and go with lots of other flavours.   Preparing chestnuts is not difficult, but a bit laborious, so get comfortable and enlist some help and company.   Put the nuts in a big bowl and pour boiling water over them.   Leave them for a couple of minutes to let the skins soften.   Then scoop some out into a second bowl of cold water to cool them enough for you to be able to handle them.  Peel these, and carry on in this manner until you’ve worked your way through the bowlful.  Once peeled they can be made into warming soup, cooked with sprouts and bacon, added to stews or stuffings, or soaked in syrup for traditional marrons glacés.

Alternatively, and best of all, you could slit the skins with a knife (they explode otherwise) and roast them.    A good reason to get the barbie out for a last airing.

Soften the chopped onion in a knob of butter or a tablespoon of oil.  Add the chestnuts and stock and bring up to the boil.   Simmer until the chestnuts have collapsed.  Season to taste, and add some crumbled bacon and chopped herbs.

Where can I pick wild chestnuts in the Mansfield Ollerton areas or nearby?

Most years in the UK it is not warm enough for long enough to enable chestnuts to ripen, so the ones in open sunny spots do best. (Remember they come from greece initially and were brought to uk by the romans!)
Most years there are many more “unripe, shrivelled looking nuts than good ones.

When I lived in Milton Keynes. I find some in Woburn.

Can anyone recommend any spot in or arond London to gather sweet chestnuts?

[email protected]
Can you recommend any good spot around York/ East Riding? Many thanks! We built a fire pit in garden and my wife loves them toasted so so much, it would be great to find some!

I’ve been collecting chestnuts but there are millions of squirrels around here and so the only ones which haven’t been raided are the ones which have come down green and unopened. Will they ripen if I spread them out and leave them for a bit?

Thanks for any advice!

Where, in Southampton,can I buy Chestnuts? I love them but am too old to forage for them.

thanks Gilliam L P that really is the best method with the best results! I have tried lots of ways and nearly gave up on hunting for them because they are hard work to prepare. No more burnt thumbs! And whole chestnuts too! Thanks Gilliam

I found some sweet chestnuts in Bristol in Leigh Woods, near Clifton Suspended Bridge, I’m planning to roast them.

Want to take my kids sweetchestnut picking we live in Middlesbrough ( northeast).

Can anybody tell me where I can go and pick them from ?

Clophill ( Back Street), Bedfordshire is a good spot for sweet chestnut foraging.
I did last week after Storm Bryan.

Just gathered over 3Kg of sweet chestnuts. It must be a mast year.Looked on line for easiest way to peel and skin them.

I tried various suggested methods and found the trouble with cooking them first makes them crumbly when you try to handle them, so I experimented a bit and found the quickest, easiest way, plus preserving your thumb nails is to cut off the pointed end with a sharp knife and with the knife, gently peelback the shell. Put the chestnuts into a pan of water. Don’t worry about the inner skin yet.

Once you have a batch (it’s difficult to know when to stop, as peeling, like gathering gets very morish), just bring them to the boil and remove from heat but leaving them in the hot water – take them out one by one (with rubber gloves) and rub off the skin. Most will come off instantly but if you get the odd one that sticks a bit (the very fresh ones with thinest skins seem to be a bit more clingy by this method), just pop them back in the hot water and if necessary, heat the water again and have a pointed knife handy if the skin gets stuck in a ridge and needs easing out.

I can’t wait to gather some more now that I know peeling them is so easy. Oh and once they’re blanched they freeze quite well.

Black Park Near Slough is a very good spot