Both horse chestnut and sweet chestnut trees are common throughout the UK, though the former is presently under attack from moths, bleeding canker, drought and leaf blotch fungus. Like oak and beech, to which it is botanically related, the sweet chestnut can grow to a height of 30 metres (for basic information about the tree, see the Woodlands “Guide to Tree Identification”).

Sweet chestnut is not thought to be a native tree. Pollen analysis indicates that it was not present before Roman times. So why did the Romans introduce the tree ? There have been various suggestions.

For its fruit. The nuts formed an important part of the Roman diet (roasted or ground for flour). However, the nuts from UK trees are smaller than those from Italy or Spain.

For firewood. Sweet chestnut is quick growing and coppices would provide material for firewood. However, the wood is not noted for burning well or giving off great heat. (Surely the Romans would have used a native tree like ash ?)

For making charcoal. Charcoal was extensively used for working with metals (tin, copper, iron etc) for example, in the Forest of Dean. Did the Romans introduce a new species just for charcoal production? Iron production was quite extensive in the 1st Century AD, so perhaps a ‘new’ fast growing species helped.

For use in the vineyards. Sweet chestnut stakes could be used to support the growing vines (as the wood is rich in tannins it would not rot too quickly when stood in soil). Perhaps, the answer lies in the fact that the tree could be used for all of these things – the wood was versatile. 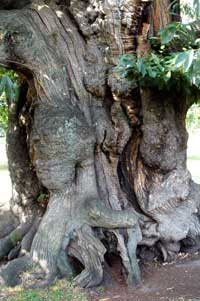 hi pls can you advise where i can pick up some chestnut near Weston-super-Mare?
Many thanks and warm regards,
carol