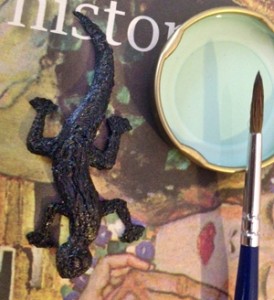 My recent investment in a 3D printer was unusually adventurous but I wanted to know what three dimensional printing was all about.  The Solidoodle 3 machine is intended for home use and cost around £700, but the family has been getting its money's worth, running it most days and often at night-time.

The software is free to download and there are hundreds of downloadable designs of things you can re-create on your Solidoodle 3 including mobile phone covers, cogs, propellers and models.  The gecko (pictured here) took about 20 minutes to print and we have produced snails, trees, model containers and ball bearings.  We found most of the files for these creations on the www.thingiverse.com website.  The head of the printer melts the plastic and as it moves around,  the plastic is deposited with great speed and accuracy onto a felt hotbed - which in turn moves up and down as directed by the computer.

People worry about how this 3D technology could be used to produce parts for working guns, 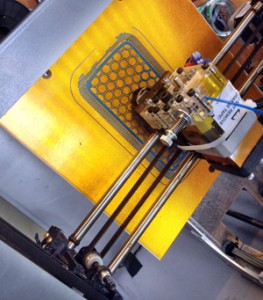 but more positively it can also print out much that is good and useful including spare parts for domestic equipment and keys.  Industrially these machines are being used for moulds for car parts and medical devices.

Even forestry could be affected: 3D printers could soon be producing spare parts for chainsaws.  So you could get back home with a broken part inside your chainsaw and instead of going to a stockist you would print out the spare part at home, replace in your chainsaw, and could be cutting down trees the next morning, without even having gone into town.  Foresters could also find these machines useful for printing 3D plans of the woodlands they manage, showing contours and other features. Forest managers will probably want to "print" in several colours, whereas our printer can only "print" (i.e. extrude plastic) in one colour - mostly black, ironically like Henry Ford's first mass-produced cars.  The material that we use is ABS plastic, though other machines use PLA plastic (Polylactic Acid).  One reel of plastic weighing about one kilo costs us £20, but this will produce hundreds of small items.

The field of 3D production 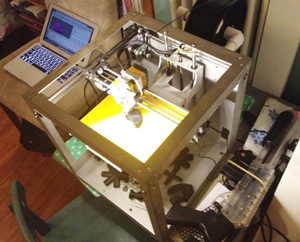 is growing exponentially and as prices drop it will surely become ubiquitous.  It will probably get a further boost when affordable scanners are available - at that point you will be able to scan your ear or finger and print out a copy.  Similarly for a snapped cog inside a piece of machinery - in which case you will be able to scan the part and put an undamaged copy back in your brush-cutter or other equipment - without the need to find the design for the broken part online.

But in the short term ownership of 3D printing equipment is likely to be a bit like woodland ownership, where one enthusiast buys it and then shares it with friends and family.

[…] My recent investment in a 3D printer was unusually adventurous but I wanted to know what three dimensional printing was all about. The Solidoodle 3 machine is intended for home use and cost around £700, but the family …  […]