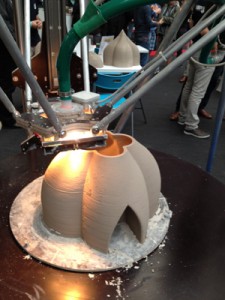 Large numbers of 3D printers are now being produced and used for home use.  It is estimated that the worldwide market in 3D printing will be £3 billion within 5 years - but what materials are used for printing?  Most currently use plastic filament (mostly PLA or ABS), but some printers are being developed to print using more natural materials such as clay or wood, and even 'mushed-up' insects.

Standard home-use 3D printers can print in "wood fill" using a mixture of plastic and wood to create objects that look as through they are wooden whist avoiding many of the issues with production of objects using real wood.  The image below this post shows an array of objects 3D-printed by a desktop machine using a "wood fill" filament supplied by ColorFabb, part of the Dutch company Helian Polymers.  This woody filament contains 30% wood and this is made with tiny sawdust-like grains using softwood.  It would be hard to find a use for a wood material that has as much "added value", with a 750 gram spool of this wood-like 3D printing material costing the user 40 euros (a usual price for a similar PLA spool would be 30 euros).

Other unusual materials used for 3D printing include chocolate and even proteins from insects.  Some food scientists have experimented with "printing" biscuits using insect flour.  This was the subject of an installation earlier in 2013 called "Insects au gratin" which asked whether one answer to the world's food problem could be entomophagy (eating insects).

At the November 3D printshow in London, there was a demonstration of a 3D printer producing ceramic sculptures using clay for the output from a small hopper on the side.  This demonstrates that the artisan or potter who has traditionally just worked with his or her hands may find that parts of their work can now be executed using 3D printing machines: the lines between hand-made, one-off and machine-made will become increasingly blurred.    It also shows that materials available in a typical British woodland - wood, insects and clay - are still relevant to the cutting edge of manufacturing - 3D printing. 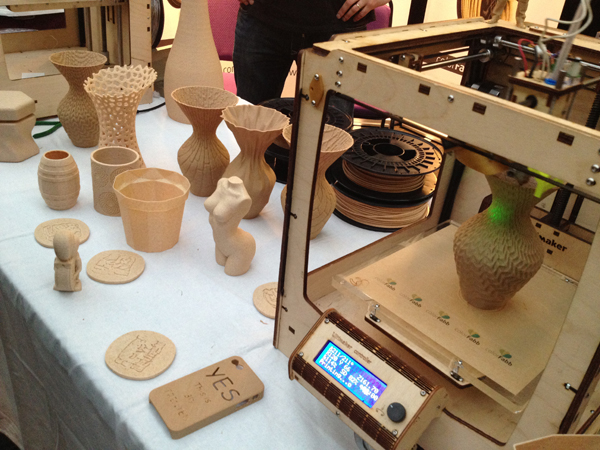 I would like to know the company that produces this printer and also the model name. If somebody could tell me, I would be deeply grateful.

Re: Chris Brewchorne comments.
This ‘man becomes obsolete, replaced by machines’ has probably been going on since the first inclined plane. The only time humans are devalued is by their own lack of faith in themselves. There is nothing to stop someone continuing to produce, even if similar copies are being made of something. It happens in so many fields I cannot start to show examples. When will this Luddite attitude finally be laid to rest?

As someone who finds the whole process of making things by hand myself a very gratifying and intimate process, I find the thought of machines reducing traditional craftsmen to outdated expensive relics pretty horrific. Man evolved because of his ability to make tools and useful objects. In now seems man is obsolete in many fields, the machines are taking over. Clever on the one hand, but also rather frightening. It means if I produce a distinctive imaginative shape with my hands, someone can copy it and churn it out cheaply, its devaluing humans.

My mind boggles. Who would have ever thought we could print copies of almost anything. I want one. John.

These are fantastic Angus!
It’s amazing what you can do with wood and the attractive shapes that can be formed.
These would look spectacular as a feature piece in any home.
Thanks for sharing!