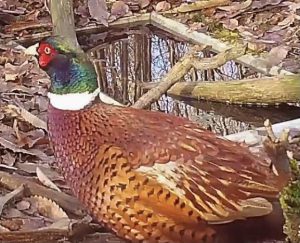 Nearly 60 Million Game Birds Released in the UK Each Year.     We often see and hear Pheasants in Woodcock Wood during the winter, and occasionally hear the sound of guns that herald their likely demise. But it wasn’t until I saw the recent reports from the Royal Society for the Protection of Birds (RSPB) and British Trust for Ornithology (BTO) that I recognised the real significance of this annual event.     According to recent research it was estimated that in 2016 up to 47million Pheasants and 10 million Red Legged Partridge were released in the autumn.   At the time of release the biomass of the game birds was more than twice the biomass of all native British breeding birds, and this number is increasing year on year.   Neither the Pheasant nor the Red Legged Partridge are indigenous British birds. Admittedly, the Pheasant has been around a long time in Europe, having been introduced from Asia during Roman times. The Red Legged Partridge is a close neighbour from southern Europe, and a relative of our British Grey Partridge.

A Call For Regulation of the Industry

The annual mass release of these birds is for the benefit of the country sport and shooting industry, and until now, has been entirely unregulated. This is an extraordinary state of affairs, given they are both non-indigenous species, and no one really knows exactly what numbers are released where, and when. No other country in Europe releases anywhere near these numbers.

Many of these birds are imported from Europe as either ready to hatch eggs, or day or two old chicks. The majority are raised in vast numbers under intensively farmed conditions, and released and grown on for some months in release pens before being driven on to the guns. Their farmed origin somewhat puts pay to the idea of tucking into totally free-range Pheasant or Partridge for Christmas dinner – some birds may well be, many definitely aren’t.

It is estimated that only around half the birds released are shot. Those that survive go on to add to the naturalised populations of the two species in UK, and over the course of the year may well breed, die of starvation, remain close to their release site because game keepers continue to feed them throughout the year, or wander off and forage away from their release site. 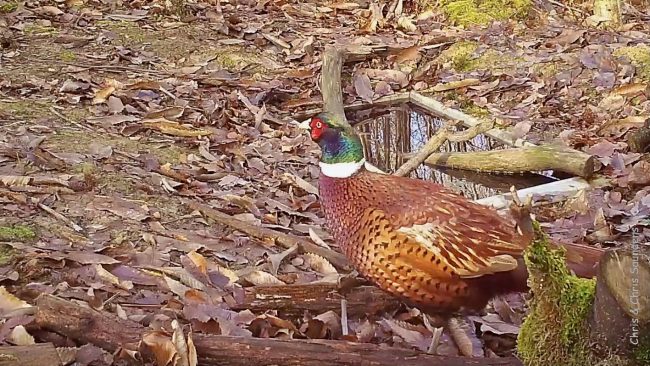 Environmental Impact of the Sport

Aside from the issue of killing birds for sport, there is considerable evidence that the release cause significant damage to the flora and fauna. In 2019 the BTO published an analysis of some of these problems, and emphasised that their numbers abnormally skew the population of predators during the time that the number of game birds is high. As the game bird numbers decrease over the course of the shooting season, the predators disperse, and can then have an adverse impact on the indigenous wildlife, particularly native ground nesting birds.

In 2020 the RSPB published a detailed research review of the pros and cons of the industry, and are discussing with “key industry stakeholders with a view to establishing and implementing a robust set of standards to ensure that in the future, the release of gamebirds is monitored effectively.”

Negative impact can be felt particularly in areas where these birds are released near to nature reserves and SSSIs, where they can disrupt the natural ecological balance.

Both the BTO and the RSPB have called for regulation of the industry. Others have taken more radical action. For instance, in 2020 the small NGO, Wild Justice, mounted a legal challenged to DEFRA “to review harmful gamebird impacts and introduce proper protection for wildlife sites”. Before this finally came to court, DEFRA agreed to license the release in sites close to sensitive wildlife areas.

The Value Derived from this Sport

Needless to say, much of this has been acrimonious, and in truth there is another side to the coin. The shooting industry presents evidence of significant positive impact for wildlife in general, derived from the management practice necessary to maintain woodland and hedgerows suitable for pheasants.

There is also no doubt that the shooting forms an important component of the rural economy, and many people derive considerable pleasure from the social element that accompanies shooting.

Industry representative bodies, such as British Association for Shooting and Conservation, are more than aware of the problems associated with the release. They work to mitigate these as far as is possible through research and the establishment guidelines of good practice for the industry e.g. in relation to feeding at the release sites throughout the year in order to reduce the distance birds wander, and the amount of foraging they undertake in competition with wild species.

Furthermore, their support goes beyond purely practical guidelines. If anyone has searched the internet for information on game bird species, they will find a considerable body of up-to-date research on the current status and threats to our indigenous game birds, such as Snipe, Woodcock and Curlew, all of which are in decline. For instance, The Game & Wildfowl Conservation Trust (GWCT) commission and fund research into these species. Based on the finding of this research they offer best practice guidelines in respect to the targeting of particularly vulnerable species. Their aim is to maintain a healthy population of these birds, not eliminate them through hunting.

The Need For Regulation

However, in an unregulated industry, we know that while many adhere fastidiously to best practice guidelines, others will be only too ready to ignore them, especially if their bottom line is income rather than the respect and love of the natural world.

We also know that parts of the industry are responsible for some devastating actions in relation to managing the environment, from the burning of heathland, to the poaching of rare and protected birds of prey on grouse moors. Successful prosecution of perpetrators in the courts is an unusual event, and the real perpetrators (i.e. the grouse moor owners) are even more rarely brought to account.

Having witnessed from afar one Boxing Day hundreds of Pheasants being driven onto dozens of guns, I find it hard to understand where the skill and love of the natural world fits into the scheme of such an event. And yet I know there are those who genuinely understand the countryside, who respect the natural world, enjoy it in a living form, and feel there is no problem in shooting game in a responsible way.

When I first published these views on our own website, Mike Lawrence, a friend, professional chef, and environmentalist, wrote an interesting reply which we published under the title Right of Reply: https://woodcockwood.com/release-of-pheasants-and-red-legged-partridge-right-of-reply/

In particular his points regarding personal involvement in meat production and the food industry are worth close consideration. Speaking as vegetarians, we respect that position, and reflect on our own attitude to the killing of animals and meat production when we still ate meat.

Without doubt hunting and shooting is a complex, divisive and emotive subject, and one that deserves the attention of anyone who has a love of the natural world, because it is certainly having a significant impact on our countryside.

For a balanced current overview of the subject perhaps begin with: https://www.rspb.org.uk/globalassets/mason-et-al-2020-rspb-gamebird-review-1-compressed.pdf

Thank you for this interesting article, a subject which I have been following with some passion
Another likely consequences of mass release is that huge numbers of game birds spend a lot of their time on the ground and as such offer a huge feeding resource to our most common tick, Ixodes ricinus; increases in abundance of this tick in the past few decades has caused alarm as they are responsible for the transmission of Lyme disease, cases of which in people have risen dramatically during the same period.

It is a fact that about half of the released birds never make it to the guns, with about half being predated upon or killed on the roads.

Whenever the natural balances of nature are interfered with, often man made, there are always consequences. But I’m afraid nothing much will change because of the political consequences

As an ecologist I am very concerned about the impact the release of pheasants has on biodiversity here in the South Shropshire Hills. We are sheep country and much of the land is overgrazed throughout most of the year and silage replaces traditional hay meadows. Single species copses have been planted for cover which add nothing to the landscape and very little for other bird species.

The paucity of bird life increases year on year. Pheasants and the seed crops planted for them, the attendant rodents all attract predator species which are “controled” as vermin by the shooters and so the cycle of indiscriminate destruction of species, from foxes to ravens, goes on.

We run a horticultural business and experience much crop damage from pheasants for which we can get no recompense since they are deemed to be “wild birds”. Much more research needs to be done on the environmental impact of releasing game birds and regulation is long overdue.