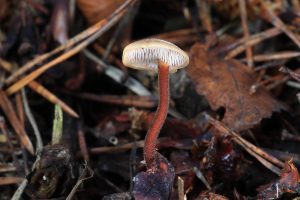 Not all mushrooms have gills. Some, like the boletes, have pores on the underside of their cap. Others have arrays of downward-facing spikes that look like teeth. This third category are described as hydnoid, and include such aptly named species as the Wood Hedgehog (Hydnum repandum) and this month’s fungi focus, the Earpick Fungus (Auriscalpium vulgare), also known as the Pinecone Mushroom or Conetooth.

These teeth, like gills and pores, constitute the ‘hymenium’, the fertile surface in basidiomycetes fungi on which spores develop and from which they are released. Look under a microscope at a mushroom gill or the inside of a pore or the edge of one of these teeth, and you will see it coated with thousands upon thousands of tiny spore-bearing structures known as basidia (as opposed to the other group of fungi, the ascomycetes, where the spores develop and are fired out from tubelike structures known as asci). These gills, pores and teeth are nature’s ingenious way of maximising the spore releasing area that contain the basidia.

It should be pointed out that not all of the toothed fungi are of the mushroom-shaped cap-and-stem variety. There are also bracket and resupinate hydnoid types, like the Ochre Spreading Tooth (Steccherinum ochraceum) or the leaf litter-dwelling Fused Tooth (Phellodon confluens). However, all these examples point to the important rule I always emphasise when trying to identify fungi or taking a photo for someone else to do the job for you – always look underneath!

To be honest, you’d find it pretty hard to mix up the Earpick Fungus with anything else at first glance anyway. Not only does its felty brown kidney-shaped cap, perched atop a slender but bristly stem, with row upon row of downward-pointing teeth on its underside, make it look like some weird alien monster you’d expect to see in a film like Little Shop of Horrors or in a Pokémon game. Its identity is also defined by its specific substrate of pinecones or other conifer-related litter. 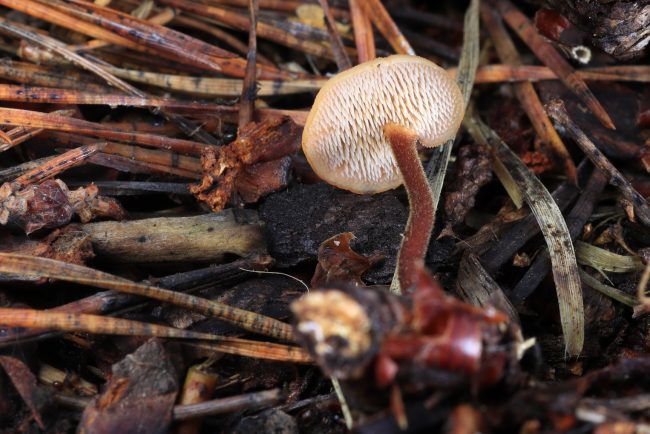 That is if you notice them in the first place. Earpick Fungi don’t tend to get much larger than 5cm in height and their caps reach around 3cm across at their widest point – as mentioned, the caps are kidney-shaped rather than circular, with the stem on one side of it rather than the centre. Their dun colouration makes them blend in with their conifer cone hosts, so you’ll probably only find them if you’re actively looking. But get down to ground level and look closely and you’ll see nothing else like these stunning little things.

Just how unusual are they then? There seem to be a number of other species in the Auriscalpium genus (the Latin name literally translates as ‘ear pick’), according to its Wikipedia entry, but Auriscalpium vulgare is the only one found in the UK thus far. Indeed, it is considered the type species for Auriscalpium - the first of its kind discovered (in 1821 by the British mycologist Samuel Frederick Gray) to which all others in the genus are compared. 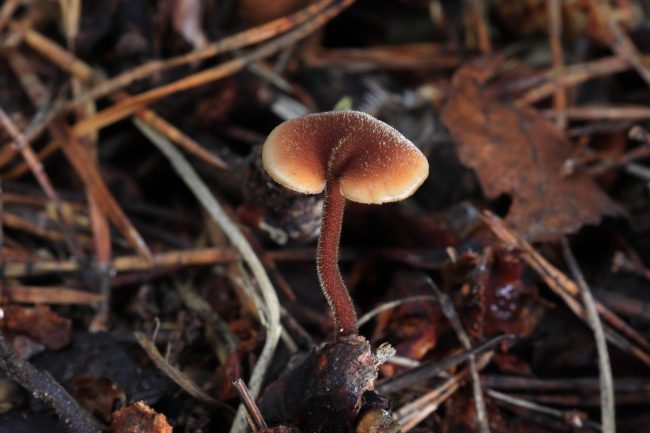 The First Nature entry describes them as “infrequent and apparently localised”, which could mean that they are under-recorded because they are so inconspicuous and that the few people who do know where to look and what to look for are the same ones recording their discoveries on general websites like iRecord or more fungi specific ones like The Fungus Conservation Trust database. Fungi recording being the piecemeal process that it is, they may be a lot more widespread than we might assume, and indeed, photos turn up on various specialist fungi social media groups fairly regularly.

This is not to say I would personally pick them, even to take home for closer analysis or to look at spore samples. I know there are plenty of foragers out there who are beholden to the mantra that a mushroom is only the fruiting body of the larger fungi organism and therefore picking them does no harm. As they argue, the rest of the mushroom is in the form of an expansive network of mycelium that is hidden underground, so it is essentially the same as picking an apple from a tree. Clearly the logic is flawed for both the Earpick Fungi and many other species, even if it did make a for a particularly choice edible (which by all accounts it doesn’t). Clearly the mycelium of this particular specimen is limited by the edges of its pinecone substrate, and therefore the ratio of its fruitbody size to the entire organism can only be very low. 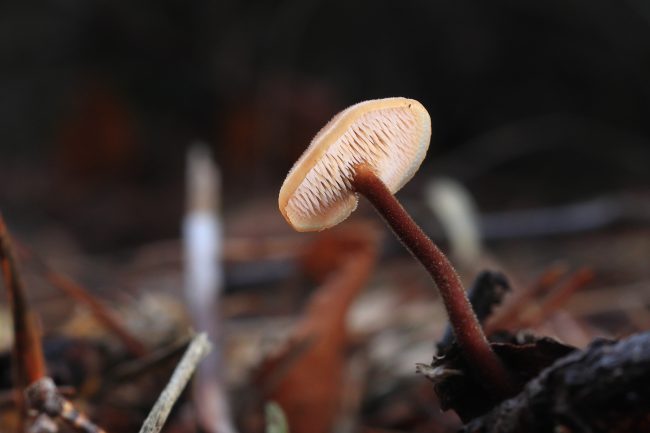 In other words, the effort that the Auriscalpium mycelium in the pinecone channels into putting up a single fruitbody must be considerably more than that of, say, an ectomycorrhizal species like a Russula or Agariuc, where the mycelium forms an expansive network stretching around and beyond the roots of its host tree. Therefore picking it removes a substantial part of the organism, if we assume the fruitbody to be an inseparable part of the organism.

If you do come across one, it is probably best to leave it there intact to continue releasing its spores rather than picking it from the cone and risking killing it off entirely.