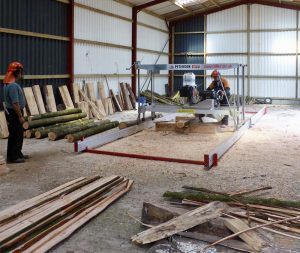 In these days when just about anything is available, delivered to your door with just a few taps on an app, I have introduced my own delivery service for some of our woodland owners – delivering to their woods rather than their homes.   The product or maybe that should be by-product, is sawdust, all neatly bagged up and deposited where it is most needed namely close by their composting loos. Not the sort of thing that is going to qualify me for a slot on Dragons Den, but satisfying in that (a) a “waste” product is put to good use and (b) the woodland owners are very appreciative.

How did it start? One of our contractors, with whom I have done quite a bit of work was doing some clearance of windblown trees for a woodland owner. He then brought his mobile sawmill on-site to ‘plank up’ the resultant timber for them. As the weather got wetter and milling opportunities outdoors became less frequent, I offered to let him use a large forestry barn* which is located within another of the woodlands at that site. The milling process generates a lot of sawdust, which he swept into heaps until we could decide how best to dispose of it.

I then recalled an earlier conversation with one of the other woodland owners at that location. The conversation was about composting loos in general and what to use to ‘cover up’ in particular. They had tried soil, moss, leaf-litter and old newspaper, but had been told that sawdust was as good as anything. So, I asked them if they would like some (lots) and they gladly accepted. Flushed with success (sorry), I then contacted a couple of other owners at nearby locations and received equally enthusiastic responses.

There’s plenty left; easily enough to last until the next round of milling takes place I’d imagine – unless any of the owners start to host curry nights in their woodlands! 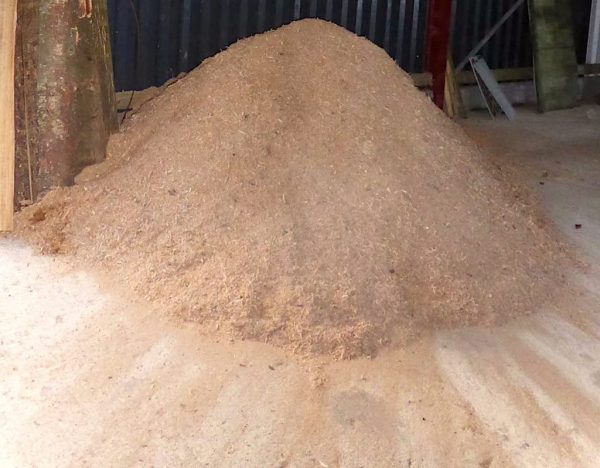 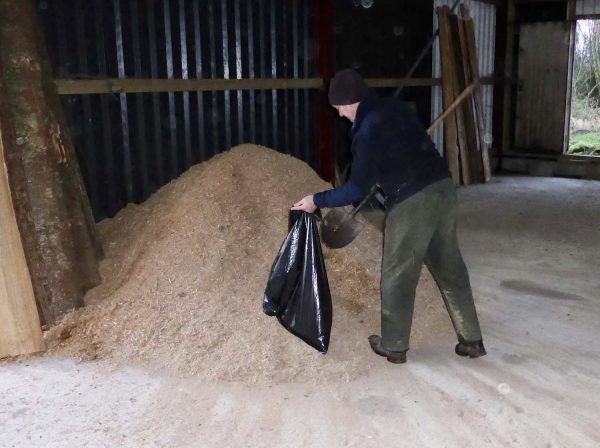 * Details of the woodland containing the forestry barn can be viewed at: https://www.woodlands.co.uk/buying-a-wood/cornwall-and-west-devon/rosebank-wood/.

Hi there. I am looking for some fine sawdust (from sanding if possible) for a childrens project. Fair amount required. Could I please request if anybody has any going spare? Thanks

Hi there, looking for sawdust supplier cheap or free in bulk can collect based in torbay but can travel around devon no further really.

Good afternoon, I work at a secondary school in Cullompton, we compost all our food waste on site and have used clean sawdust and fine chippings to aid this process. Unfortunately we have been advised that our original source is on-longer available. Is there a FREE source available, we can bag and collect. Please get in touch if you can help. Kind regards, Carl

Hi there, I’m in the South Devon Teigbnbridge region and also looking for fine saw dust suppliers, have a luton van that I could collect with. It’s for a personal use compost loo, we have storage space at our farm so could collect as much as van could carry each trip. Thank you! 07795161867

Hi. We have a quantity of fine sawdust from wide belt sanding machine.
Anyone interested?
Tim

Hi Susan
Are you still looking for sawdust. If so can you email me direct.
Thanks
Miranda

Unfortunately not. Try contacting sawmills / firewood suppliers in your area, they might be able to help.

[…] or grinding of wood with saws or other tools / machinery.  Both wood flour and sawdust do have a number of uses.  Sawdust, for example, can act as a mulch or indeed as fuel (as in the manufacture of charcoal […]

Susan if you want to contact me direct and let me know where abouts you are in Devon and what sort of quantity you are looking for, I’ll see if I can help. [e: dickwoodlands.co.uk]