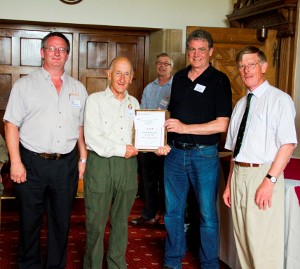 For the first time in the history of the prestigious Excellence in Forestry Competition, small woodlands were in the running for prizes this year. A new category for small woodlands attracted strong entries, with the winner’s prize being awarded to Rawhaw Wood in Northamptonshire, a Runner Up prize to Red Lodge Wood in Leicestershire and a Certificate of Merit to Vera’s Spinney in Nottinghamshire.

The awards, run by the Royal Forestry Society, recognised the efforts of owners who saw their woods flourish as a result of their personal management and care. Richard Scholfield, of Woodlands.co.uk, presented the awards on the red carpet at Madingley Hall in Cambridge on 30 June.

The Excellence in Forestry Competition moves each year around England, Wales and Northern Ireland on a seven year rotation. Next year, the competition will go to Gloucestershire, Wiltshire, Somerset, Devon, Dorset, Cornwall and Avon. So if you are a hands-on owner of a small woodland in any of those areas, and have a success story to tell, do keep an eye on the Royal Society’s call for entries to be announced in the autumn. Your woodland must have been established for at least ten years and be no larger than 20 hectares - there is no minimum area. The Royal Forestry Society will even consider entries for small neighbouring units. We do hope you will participate.

You can read more about this year’s winners and judges’ comments on the Royal Forestry Society website.