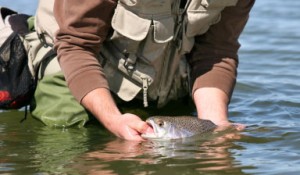 There have been some comments regarding the legality of tickling trout but, as far as I know, the practice would only be illegal if you were fishing in private waters, without permission.  These days more and more people have this facility, especially those who are fortunate enough to own their own woodlands.

In my previous article I explained how to tickle trout whilst lying on the bank of a waterway, but it is possible to tickle in slightly deeper water, up to about 3 feet (91.5cm) in depth.  This involves wading and it is advisable to wear suitable footwear, such as old plimsolls, to protect against any broken glass or crockery that may be lurking!

When you see trout in a pool just wade in quietly, but now your touch is even more critical than when lying on the bank where the fish may be contained, to some degree, by tree roots or the like. In open water your touch is all-important, but you do have an advantage in that the water will quickly become dirty, and although you will be unable to see the fish, presumably they will not be able to see you!   Sometimes you can expect to feel them bumping into your legs!   It is necessary to establish the position of the trout in the water, by touch, and manoeuvre your hands around the gill area.  From there on it’s much as before.

Suitable pools are often found in small rivers that meander.  There will often be shallow, faster flowing runs leading to a bend where there will be a deeper pool, and then more shallows. If you want to make sure that your quarry doesn’t immediately vacate the pool you are fishing (wild brown trout can be very flighty!)  you can create a temporary barrier using waterlogged tree branches or stones across the shallows.  The River Hindwell, between New Radnor and Walton in Powys often flows underground during the summer months, leaving pools containing captive trout. The river is known as Summergill in that local area, but I doubt if you would get permission to tickle there!

Our older son taught me this technique and it works great in Colorado/New Mexico for Rainbows, Browns and Brookies and it is absolutely illegal in the USA. It turned out to be very easy and effective. I should like to say that we did catch and release but since the statute of limitations is doubtless long past – they were delicious. Am told the technique works well on Moray Eels but the issue may be in doubt as to who eats whom.