“Action Oak” – should oak tree research be funded by DEFRA or by charity appeal? 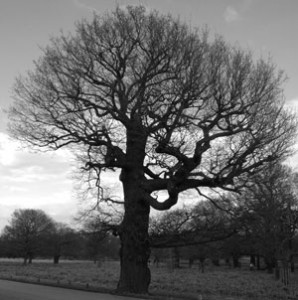 Oak trees are under threat through disease and climate change and it will cost serious money to research causes and solutions.  This could be paid for either through general taxation or by an appeal for charitable donations with help from high profile people such as celebrities and the Royal family.  The rate of required spending on oak disease is increasing.  It is proposed to set up an "Action Oak" charity appeal spearheaded by Woodland Heritage - an organisation based in Haslemere just 10 miles from the Forestry Commission's research arm at Alice Holt in Surrey.

Many people will wonder why the government isn't doing more directly through DEFRA (Dept of Environment, Food and Rural Affairs) rather than launching Action Oak to appeal for money from individuals and the private sector: such an appeal will harness the goodwill that has been built up by Kew Gardens and the Forestry Commission's Forest Research to get donations to fill the gap.  A public-private partnership is planning to launch Action Oak in late May 2018 at the Chelsea Flower Show 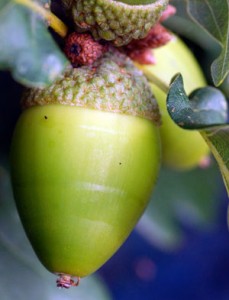 and organisers hope that furniture designers and academics will support this novel way of financing government research.  Actually a policy of recruiting help from the charitable sector isn't entirely new - Cancer Research UK and other medical charities raise large sums from appeals to support research into human health - but Action Oak may be a first such appeal for plant health.

Critics will say that a conservative government is cynically using its links with charities and the Royal Family to get wealthy landowners and business people to contribute to what they consider to be a government obligation.  Defenders of "Action oak" may respond that the main beneficiaries are private landowners - who own a large proportion of threatened oaks - and that these wealthy owners should be encouraged to pay up to protect their own trees.  It comes down to what role you think oak trees have - are they there for timber production and private gain or are they more like a public good - part of a shared, irreplaceable heritage giving landscape value and delivering "eco services"?  Presumably both claims are true.  Even so, if funding is raised from appeals then those owners who don't contribute will be free-riders on the donations of others.  So should a compulsory levy be charged to landowners to pay for this research?

To make the Action Oak appeal work well DEFRA plans to get the process started by donating half a million pounds towards the £15 million needed.  In a sense, this is the government transferring funds from one pocket into another in a way that pump primes a charitable appeal.  After all, the seed funding money will be found by DEFRA to be transferred to other government bodies - Kew Gardens is state-supported and Forest Research is part of the Forestry Commission.  But why shouldn't it do that, if it works?

Oaks are under threat from several known diseases such as the Oak Processionary Moth, Chronic Oak Dieback and Acute Oak Decline (AOD). 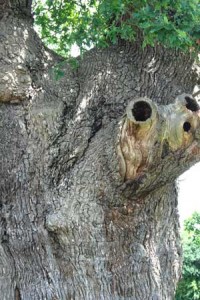 But there are also threats on the horizon such as honey fungus and other diseases which are more apparent in Europe including oak wilt and Xylellia fastidiosa (a plant pathogen which causes leaf scorch).  Whatever method is used to fund research into these oak diseases, woodland lovers will wish the researchers well - recent sponsorship has been led by the charity Woodland Heritage which has been building up funds for a few years and now has over £2 million of liquid assets, of which about a third is set aside for work on Acute Oak Decline.  Woodland Heritage have recently funded research at several universities including the University of the West of England and three Welsh universities - Bangor, Swansea and Aberystwyth.  Research is also being supported at Rothamsted in Hertfordshire, and Alice Holt in Surrey.  The Action Oak campaign might help to fund increased research at these and other UK research centres, though the question remains:

Who should be paying to protect our oak trees -  DEFRA, landowners or charity?

how i wish that something could of been done to save well over 100 oak trees that have been felled here. i live in Bordon and although i tried to stop the felling of the trees here i wasn’t able to.i am about halfway between Alice Holt and Haslemere
this is supposed to be progress but my estimates of total woodland in Bordon may well be at around 70 to 80% total wipe out on former army land it may even be higher.
why because someone somewhere decided to take away the trees for houses which no doubt someone will make money from.
there very few original trees being left standing. not taken by disease but by mans greed.
i did try to grow some acorns and horse chestnuts and had some success the conker trees are in their second year but unfortunately the 1 oak that germinated and grew last year hasn’t grown this year which is a pity. can anyone help me with at least the one conker tree as it is going to get too big for the garden space. both conkers and acorns were from the 100+ trees that were felled here last year.
sorry it is for me a very emotive subject having lost all the green space here that we had.we used to live in a semi rural setting and without moving anywhere at all we are now destined to live out our days in an urban environment.
sorry i’m just doing whatever i thing i can that maybe could get the message out there.
thanks
fiona

I think Defra, Forestry commission, landowners and charities should all contribute to funding research to ensure we have Oak trees in hedgerows and forests in the Uk for future generations to enjoy.