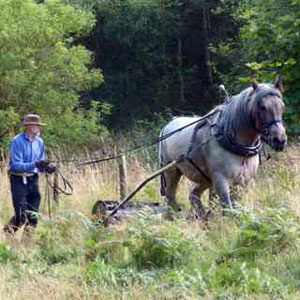 On 1 January 2013 it will become illegal to use the bracken-control chemical Asulam.  The chemical, which was sold as Asulox, was banned by the EU on 31 December 2011 but those who already had stocks had a year to use these up. While good in small areas, as it provides cover for animals, bracken can be a real problem, quickly becoming a monoculture, shading out and eliminating wild plants and flowers.

Landowners are now considering their options, the main alternatives that lend themselves to automation being cutting or rolling.  I have been using horses for bracken control for a couple of years.  The horse pulls a special roller with ridges, which bends and partially breaks the bracken fronds. This has the effect of weakening the plant as it attempts to regrow.  The rolling is done around mid to late summer and, like chemical control did, needs to be repeated for a few years.  Each rolling operation can reduce shoots by about one third, thinning a dense stand of bracken into more scattered fronds. 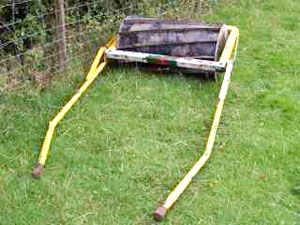 My business, Powys Forest Horses, is mainly horse logging but bracken bashing makes a useful summer job for a working forestry horse.  This last year, Elza my Dutch Draft mare and I helped Forestry Commission Wales to control thick bracken in Breidden Forest, which sits on the border between Powys and Shropshire.  Local Area Manager Jim Ralph turned to horsepower to reduce the bracken instead of using chemicals on the sensitive area, which is close to a Site of Special Scientific Interest (SSSI) as well as being popular with walkers and horse riders.

I agree that pulling up the rhizomes does work: my father-in-law has eliminated a small path of bracken by doing this over 2-3 years. However it would be too time consuming for a large area. Bending the stems over will have a very similar effect to using my horse and roller and the plant’s attempts to regrow is what weakens it the following season. It seems to be much better than cutting. Once the bracken is weakened other plants get a chance to regain a hold. I have used horses to crush bracken in both woodlands and heathland areas; in the woodlands bluebells and wood anemone reappear and on the heath it has helped heather, gorse and fine grasses regenerate.

I have attempted to clear a relatively small patch of bracken for the last five or six years. I started by just bending over the stems, but if there is any stem in tact, they will keep growing. Then, I went round hitting the bracken with a stick and chopping off the tops completely. I now pull them up as far as it is possible, it also avoids leaving those short stems. The main thing is the frequency in attacking the plants, I think you have to destroy them every two weeks or so throughout the summer, which is alright as long as you don’t have a huge area to deal with. The plants are considerably weaker now, but if I give them any quarter, they will be back. I can’t tackle the huge areas of bracken in the wood. The amazing thing is that since I have managed to mostly keep the bracken at bay, I see that bluebells have started to show.