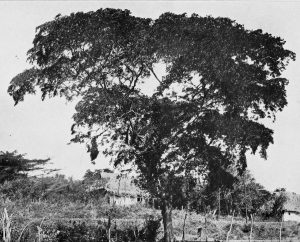 Lignum Vitae, Latin for the ‘tree of life’, has a set of properties that cause a newfound awe in natural materials. Also known as Ironwood, it is the hardest and heaviest traded wood, being 3 to 4 times the hardness of English Oak. It was the alleged medicinal properties of Lignum Vitae which have earned it the title ‘tree of life’.  Sometimes brewed into a tea or as a herbal medicine; historically - it was used to treat symptoms of gout, arthritis and syphilis. Its properties / uses are still being explored.

What is particularly impressive, are the undoubted properties that make Lignum Vitae so attractive in engineering. Its unique uses come from its strength, ranking highest of traded woods on the Janka scale of hardness with a hardness of 4,390 lbf, combined with natural oils causing self lubrication and wear-resistance. These oils also provide resistance to rot and to degradation from insects. Lignum Vitae was used for the aft main shaft strut bearings of the USS Nautilus - the first nuclear powered submarine. Similarly it is also used as the main shaft bearings of the Pointe du Bois generating station. Its oily finish and relative density give it the perfect combination to act as a friction-free bearing when submerged in liquid. Historically, its uses were many and varied, colourfully being used for an English policeman’s truncheon, alongside many tools and bearings.

Unfortunately Lignum Vitae is a diminishing resource, found between Jamaica, Florida and the Bahamas. It is likely that, due to overconsumption of the wood, we will run out of it in the wild before younger trees grow to maturity. The wood can be taken only from two species of tree, and due to its attractive density, these are both extremely slow growing. Lignum Vitae is still allowed to be traded however, but the species is CITES II listed and also on the IUCN red list

Above left is a jpg of the flowers of Lignum Vitae.

I lived in the Dominican Republic for 16 years and the tourist stores sell many souvenirs made from Lignum Vitae. Dominicans call it Guiacan. The locals also make medicinal tea from the leaves. Unfortunately Dominicana practice zero conservation hence I have little hope for these trees lasting long term.

Used to make bell hammers out of! When I worked as an apprentice at John Smiths Clocks of Derby. Wonderful material very hard, when it struck the church bells gave a wonderful sound.

I only know the wood from handles of chisels and knives. I was also aware of ironwood but didn’t know it was the same thing.

When I lived in Carriacou in Grenada W.I. We used it to make cutlass bearings for the prop shafts of the local schooners and even yachts as it could take up to a year to get in the right size of brass bearing. Even when the boat got the new brass bearing delivered they usually kept it in stores and continued with the lignum vitae one for several years. The wood also has the advantage of not being susceptible to damage by electrolysis.
I seem to remember it grows in the tropical dry forest rather than the rain forest, often close to the beach, and a machete just bounces off it as I discovered when trying to clear some bush once.

Interesting article on the Lignum Vitae. I did not know it is a diminishing resource! The trees are grown all over Jamaica where I spent my childhood. It is the national flower there. Bees and butterflies are attracted to the flowers and when the trees are in flower it is a glorious sight! I paint fruit and flowers inspired by my childhood garden in Jamaica and feature the Lignum Vitae flowers on my bone china collections.

A fascinating lesson on the varied properties of this tree. I love its vivid blue flowers, and wouldn’t mind trying the medication for my arthritis.