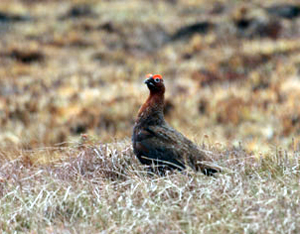 Grouse shooting makes an important contribution to the local economy of upland areas - such as those in Scotland, contributing many millions of pounds.  In order to create / maintain the patchwork of habitats to suit the birds, land owners periodically burn patches of vegetation in order to encourage the regeneration and new growth of heather (and other plants).  Older birds tend to 'favour' tall heather patches where they can shelter / hide, whereas young birds like to feed on tender, fresh shoots of heather.

The practice of selective burning creates an area with a vegetational mixture ; after burning seeds germinate and roots put up new shoots.  The burning is normally restricted to the autumn and winter months - usually between October and the beginning of April.  Burning has been practised for many decades but recently it has been subject to more detailed ecological investigation. 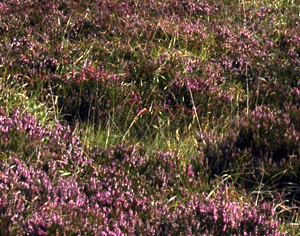 Workers from the University of Leeds have looked at the effects of heather  burning on 'stream health'.  Ramchunder et al looked at the chemical composition of water and the various stream invertebrates (insects, crustaceans, flatworms etc) at 10 sites, five of which were subject to burning and five which remained free of fire.  They found that at the burned sites there was a movement of materials from the peat / heathlands into the streams.  Consequently, there was an increase in the levels of sediment and organic carbon in the water (the levels of iron and aluminium also changed) and a decrease in the numbers of mayflies, stoneflies and other invertebrates.

It is possible that the management of peatlands through rotational burning may need to take into account the effect of these discharges into  streams in the surrounding landscape.  Rivers and streams are sometimes referred to as lotic systems - systems with flowing / moving water.  Lentic  systems have 'still' water - as in lakes and ponds.

For more information see : http://planetearth.nerc.ac.uk/news/story.aspx?id=1444 and for a detailed review of  "The costs and benefits of grouse moor management" - click here (pdf file)