A woodland predator, the pine marten 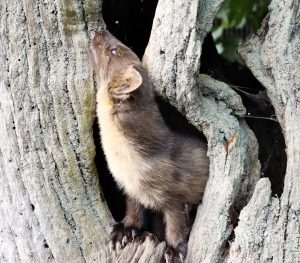 Pine martens are woodland predators.  They have sharp teeth and prey upon small mammals e.g. squirrels (red and grey), birds, insects and frogs. They have also been known to eat carrion, berries, birds' eggs and nuts. Pine martens may be preyed upon by golden eagles and wildcats, but it is humans who have posed the most considerable threats to them.  At one time, their fur was considered desirable and, as they will attack game / small livestock, they were subject to illegal poisoning and shooting. The loss and fragmentation of woodland across the U.K. has also contributed to the decline in pine marten populations. Now, they are protected by law through the Wildlife and Countryside Act.

Pine martens are not common and for many years were only to be seen in the north west of Scotland.  However, in recent times they have moved across Scotland and into parts of northern England.  This spread has been supported by the ‘Back from the brink’ project.  This is good news in terms of species recovery of a native woodlands predator.

The difference in behaviour may be due to the fact that the red squirrel and pine marten have existed alongside each other for millennia, whereas the grey squirrels are a relatively recent introduced species and as such is ‘unaware’ of the pine marten as a predator.  Whether or not the grey squirrel can ‘learn’ (over time) to recognise the scent of its predator remains to be seen.  Such ‘learning’ has been seen in some species, eg. moose with wolves, ring tailed opossums and alien red foxes in Australia.

Woodlands TV has a film about the pine marten :