There is also the creeping buttercup (Ranunculus repens).  This tends to prefer damp situations, but is fairly easy going and tolerant of its habitat.  It can spread rapidly by means of runners (or stolons).  These spread out from the parent plant and produce roots at nodes on the runner.  Where these roots take hold, a daughter plant may be formed.  This is genetically identical to the parent and to any daughter plants formed from the same parent plant. 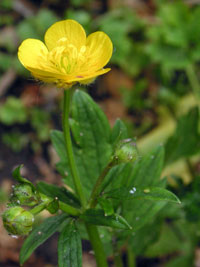 The creeping buttercup can therefore reproduce both sexually and asexually (or vegetatively).  By reproducing asexually, it can establish clones – groups of plants with an identical genetic make-up.  These clones may have particular and distinctive features, for example, six or more petals instead of the ‘normal’ five (as a result of mutations that have occurred in the parent plant).  Such features will be perpetuated in the clones.

Such clones and variations are being used by Dr John Warren at Aberystwyth University to investigate the age of meadows.   Some initial work suggests that old meadows may have a greater number of buttercups with additional petals.  If you would like to help with this project, searching for ‘geriatric buttercups’ then visit Dr Warren’s web page http://users.aber.ac.uk/jhw/.

[…] and their insect pollinators) through sheer size and the colours that they reflect, but the humble buttercup is not without a claim to fame.   Its small but bright yellow flowers are quite special.   The […]