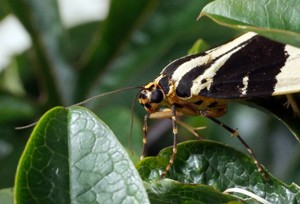 Many of the 'headlines' in newspapers etc.  speak about the loss of particular species (e.g. elephants, rhinos) and whilst these are important animals and the reduction in number of any species is a cause for concern, they are not necessarily good indicators of the threats to the millions of species that seemingly pass unnoticed.   In terms of sheer abundance and, indeed,  diversity of form - the arthropods, and particularly the insects are unsurpassed.

In order to know what is happening to our wildlife in general, it is a good idea to take a close look at what is happening to insect populations / species.   Fortunately, this is possible as since Victorian times, collectors and naturalists (such as James Cosmo Melvill and Frederick Haines) have studied and recorded spiders, beetles, butterflies and moths (Lepidoptera) in great details.  The Butterfly Conservation’s national moth recording scheme still makes use of many gifted amateur observers, and it offers a wonderfully detailed dataset.   Researchers at Centre for Ecology and Hydrology, Butterfly Conservation and the University of York have analysed the available records of some 600 + larger moth species- (taking account of some 11 million sightings) that were made between 1970 and 2010.

Their findings may be summarised as follows :

Improving the connectivity of natural environments by

all will help moth and other insect / arthropod populations; especially in areas where intensive agriculture is dominant.

else what a waste!