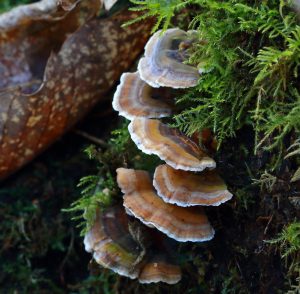 While the winter woodlands are now largely bereft of the colourful cornucopia of mushrooms we’ve been seeing over the past few months, bracket fungi abound. It only seems fitting, then, to add a seasonal twist to this month’s fungi focus and take a look at one of our most commonplace and picturesque examples, the Turkey Tail (or Turkeytail), as well as one of its closest lookalikes.   Turkey Tails are very much a fixture of woodlands across Britain, and indeed are widespread throughout much of the world. This catchy common name, which succinctly describes the colours and forms of its variegated fan-shaped shelves, seems to have crept over from America fairly recently. Previously it was known over here by the rather more prosaic yet equally descriptive name of the Many-Zoned Polypore, a fair rendition of its Latin binomial Trametes versicolor.

Members of the Trametes genus are described in the great two-volume tomes of the Fungi of Temperate Europe as forming ‘predominantly annual, thin but tough, leathery caps that mostly appear in crowded, imbricate [i.e. overlapping] formations”. The First Nature entry for this species notes that the name derives from the prefix ‘tram’ meaning ‘thin’. 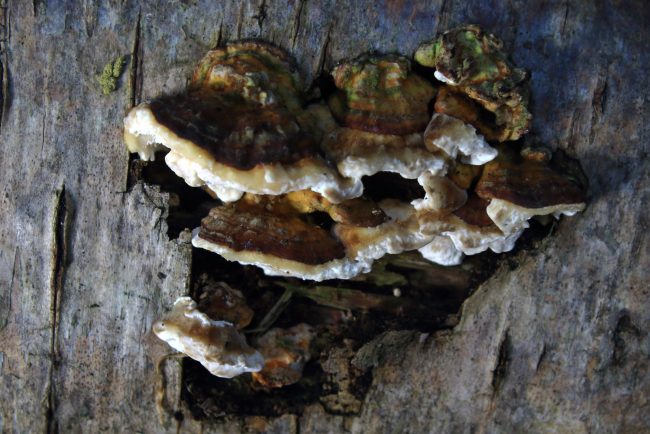 I covered a handful of other members of the Trametes genus back in April, and one thing we can say about them is that the leatheriness of the fruit bodies means they do tend endure over the winter period for a good few months, so with not that much else of immediate mycological interest out there, the winter period is quite a good time to hone up on bracket identifications skills.

The Turkey Tail has attracted a fair degree of attention in recent years due to it purportedly containing a number of cancer-combatting chemical compounds, something explored in some detail in the Fantastic Fungi documentary covered last month. Indeed we can pretty largely attribute the rise in interest in this fungi among foragers and natural remedy advocates, and the popularisation of the name Turkey Tail, to this film’s main subject, Paul Stamets, who sang its praises in his book Mycelium Running: How Mushrooms Can Help Save the World (2005). How to make these compounds available in a consumable form is another matter. Capsules of Turkey Tail extracts seem to be available from a number of online retailers, while some people swear by making a tea from these otherwise very tough and inedible brackets. While the more cynical might express a degree of wariness about going too gung-ho over the more panacean claims for the Turkey Tail, there is some clinical evidence out there as to their efficacy. 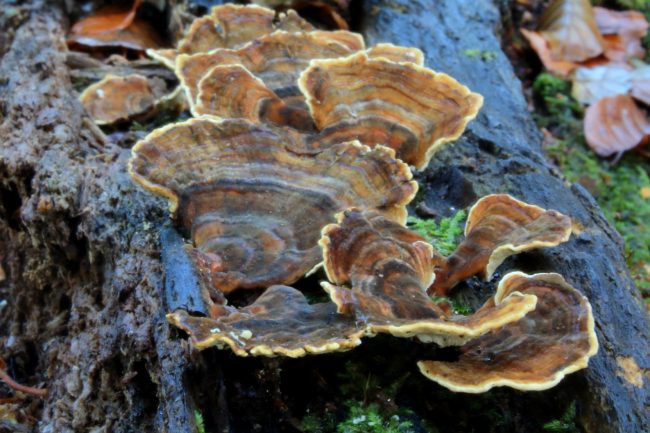 While Turkey Tails possess a number of features that make them fairly easy identify in the field, there are also a number of superficially similar looking brackets that they can be mistaken for if you are not looking closely enough at all the key features. None of these other species are likely to do you much harm, but it does serve to highlight that a basic degree of knowledge will only get you so far in life.

This seems to be particularly the case in mycology: just when you think you’re getting somewhere, you begin to look a little more closely and the picture becomes all that more confusing. Volume 2 of the gargantuan Fungi of Temperate Europe contains dozens of pages on brackets, with many looking so similar it is enough to make one tear one’s hair out in despair as you realise that something you thought you had recognised instantly may in fact be something completely different. The main issues are that the distinctive colours of certain species may vary wildly, and that brackets don’t always appear in tiered shelves but can take a more resupinate form, meaning the spore releasing surface faces outwards rather than downwards depending on the orientation of the substrate. 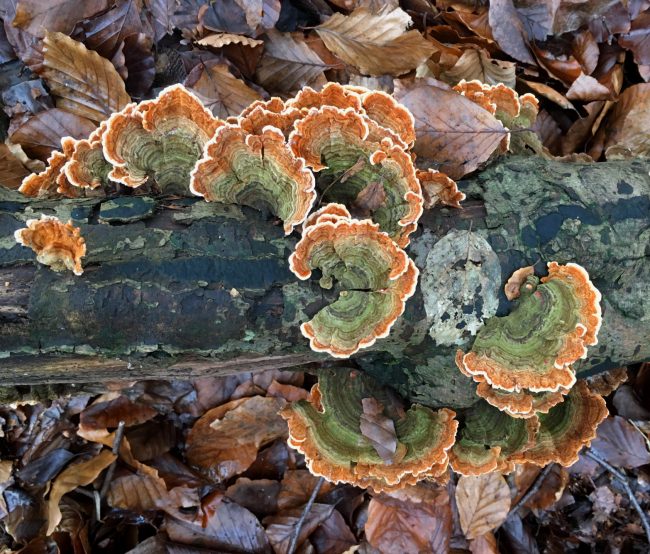 So let’s look at our Turkey Tails in more detail. These are found primarily on the dead and decaying wood of deciduous trees - very rarely on conifers - growing as dense overlapping tiers or rosettes on rotting logs and stumps. Look at the upper side of the cap of an archetypal specimen and it is easy to see where the name comes from. The surface is decorated with concentric rings of varying colours, strongly delineated and ranging radically through whites, oranges, reds, browns, blues and blue-greys to almost dense blacks, with the margins usually tending at the whiter end of this spectrum, each zone also varying in its smoothness, silkiness or hairiness to some degree.

The brackets themselves, which get up to about 10cm in diameter, are thin and the tough interior flesh, if they are torn or cut open, is whitish. As the season progresses, these strikingly coloured shelves might lose some of their vibrancy and detail as the colours become worn and washed out and green algal coatings might begin to appear on the topside. In such instances, the most likely possibility of confusion would be with the less common Ochre Bracket (Trametes ochracea), covered in its own separate page on the First Nature website. 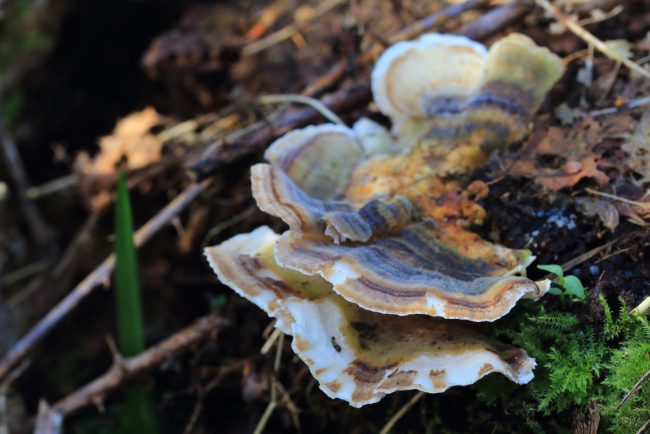 The key is, as ever with fungi identification, to look beneath. With the Turkey Tail and the Ochre Bracket, the hymenial surface from on the underside from which the spores are released is covered in rounded pores and is white or cream in colour. This would be the key feature to distinguish it from a very similar looking fungus known as the False Turkey Tail, which also has multi-coloured concentric rings, although admittedly more tightly confined within the orangey-brown part of the colour spectrum. 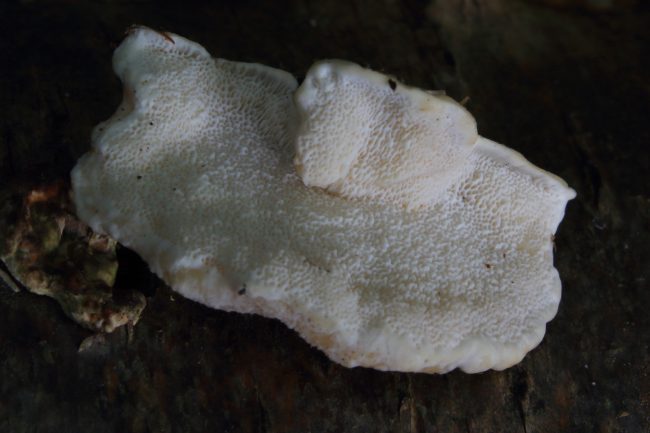 The poroid underside of a Turkey Tail

Google ‘False Turkey Tail’ and the Latin name that comes up is Stereum ostrea. This seems to be a North American species that has been very rarely reported in the British Isles, but it does have its counterpart over here in the form of Stereum subtomentosum. Now as far as I know, and I certainly would love clarification on this issue, it would seem that S. subtomentosum is synonymous with S. ostrea – despite the different names, they are the same species, or part of the same species complex, meaning the species boundaries are so blurred that the two might as well be treated as one and the same unless you are playing hardball genetics. (There’s a scientific paper here for the truly curious that claims that the North American S. ostrea might indeed be at least three reproductively distinct species, including S. subtomentosum.)

In any case, instead of the white poroid underside of the latter, the hymenium of the False Turkey Tail, be it S. subtomentosum / S. ostrea, is completely smooth (or corticioid), like the spore-releasing surface of many crust fungi. It is less deeply hued than the cap, but also ranges in colour from an orangey brown that becomes progressively lighter towards the yellowy-white cap edges. 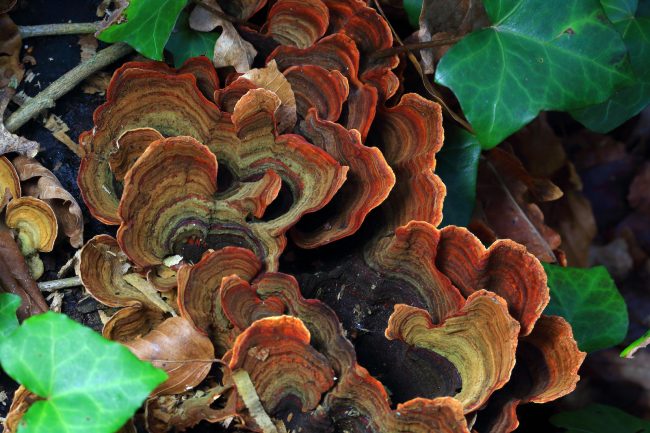 This bracket also tends to stain yellow when is scored or bruised, at least when young and fresh. This is the reason why Stereum subtomentosum is better known as the Yellowing Curtain Crust in Britain rather than the False Turkey Tail. That said, it is far more consistently bracket shaped than many other members of the Stereum genus. The Hairy Curtain Crust (Stereum hirsutum), which I covered here a few years ago, seems also to be known by some out there as the False Turkey Tail, although the bristly often undulating surface of its orange upper side makes this one fairly easy to identify.

The Hairy Curtain Crust is one of a number of Stereum species in the UK that are very prevalent in the early months of any given year, and in which, much more so than the Turkey Tail and False Turkey Tail, the line between its resupinate “crust” form and its shelved bracket form is often obscure. 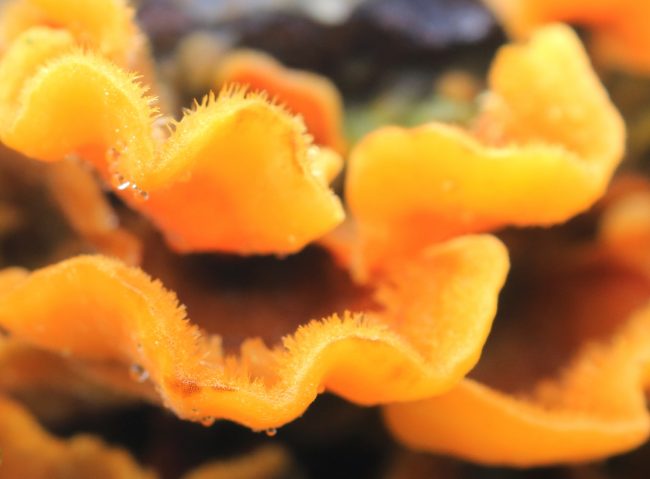 The Bleeding Oak Crust (Stereum gausapatum) and the Bleeding Conifer Crust (Stereum sanguinolentum) are even more crust-like, to the extent that they essentially appear as yellowy-orange patches, the underside of their peeling edges corresponding to what might have been the top surfaces of their brackets – both bruise or bleed red instead of the yellow of the Yellowing Curtain Crust, and can be distinguished from one another by the favoured substrates highlighted by their common English names. 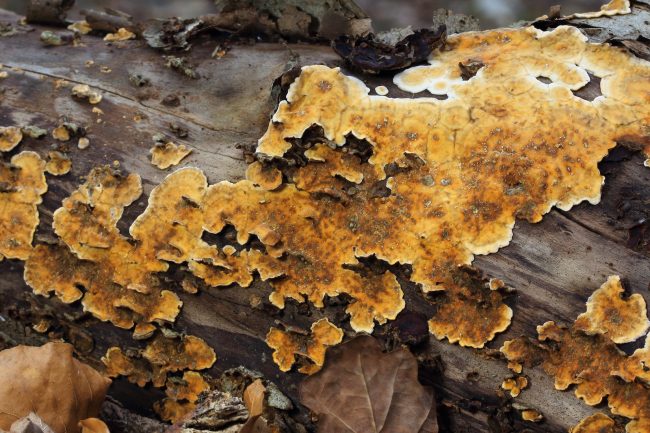 Distinguishing Stereum species, however, is not the purpose of this piece but recognising a False Turkey Tail from a Turkey Tail is – and lets face it, one is hardly likely to mistake a Bleeding Oak Crust from this month’s focal fungi. That said, the messages that I want to stress in this piece is that brackets and resupinates should not be treated as two discrete entities, with many fungi species adopting forms somewhere in between; that looking at the underside of brackets or the hymenial surface of crusts is crucial to their identification; and that what one might recognise as Turkey Tails aren’t always what they appear to be. All of these areas I hope to explore further in January’s post on Turkey Tail lookalikes.

Hi Rohan, thanks for the kind words about these fungi articles. I’d be curious to see these pictures. I’m wondering if you might have Chondrostereum purpureum, the silverleaf fungi, because that is also a resupinate that sometimes forms brackets – I think I shall include it in my next post. But it’s true, many of these bracket fungi start off near unidentifiable and can take months to develop, and I struggle with turkey tails in some of their forms.

Another fascinating article.I’ve spent much of my spare time in the last decade restoring mixed broadleaf coppice on a rather waterlogged midlands clay soil which supports few large agarics, so most of the fungi I see are on dead stumps or dead wood, and Turkeytails are very common.

A few years back I was puzzled by the appearance of deep-violet-coloured blobs on some of my dead stumps.Over the ensuing months I was able to observe them gradually spread, wrinkle up, and transform themselves into…Trametes versicolor. I have photos of this process, and I wondered if any of your expert texts comment on this appearance of their early stage of growth.