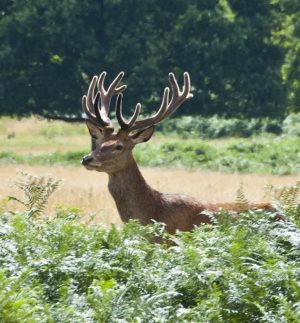 Chronic wasting disease (CWD) affects deer, sika deer, reindeer, elk and moose. It was recorded in the wild in the United States some forty years ago, but had been seen in captive deer back in the 1960’s. Now the number of reported / observed cases is increasing; it is spreading in the United States and Canada.  Some 24 states in the U.S  and two Canadian provinces have recorded cases.

Chronic wasting disease also known as ‘Zombie Deer Disease’ affects the central nervous system of the animal.  The deer experience loss of co-ordination, weight loss, bouts of extreme aggression. And eventual death.  It is a neuro-degenerative disease.  The affected animals have a ‘wasted appearance’ and a ‘vacant stare’.

It is generally held that the disease is caused by a prion - a type of ‘rogue protein’.   The prions of CWD probably spread between animals through body fluids like saliva, blood, or urine, (and  possibly faeces) either through direct contact or indirectly through the contamination of soil, food or water with body products. Once present in an area or  a farm, the CWD prion is ‘contagious’ within deer and elk populations and can spread. It is thought that CWD prions can remain in the environment for a long time, so other deer / elk etc. can contract the disease from their surroundings even after an infected animal has died. 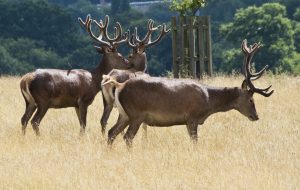 Worryingly, it has been found that macaques could develop the disease after ingesting infected meat (from  sika deer, reindeer, an infected animal).  This has raised fears that the prion could pass to other species - including humans.  This would result in a situation not dis-similar to ‘mad cow disease’ in the U.K. in the 1980’s and 1990’s.

However, Dr. Frank Bastian (Louisiania State University) has questioned whether prions are involved in CWD and other spongiform encephalopathies (eg scrapie) - instead positing that bacteria (Spiroplasma) are involved.  If this proves to be the case, then a vaccine could be produced to combat it; this would help eradicate CWD in captive deer populations.