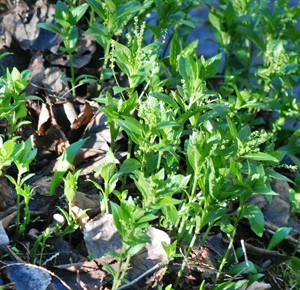 Dog’s Mercury (Mecurialis perennis) is sometimes referred to as ‘dog’s cole’. It is a perennial and is found in woodlands (particularly beech and oak); and in shady places (like dense hedgerows); it is found widely throughout Britain (except Northern Scotland). Its distribution in Ireland is much more limited.

It can spread by means of its underground rhizomes (stem-like structures that penetrate through the soil) and when it finds suitable conditions,  it may form a carpet of plants. There is some evidence that high light intensities inhibit the growth of the rhizomes. The plant can be quite invasive – especially in shady places.

The stem is hairy and unbranched, with more leaves present near the top than the base.  The leaves are dark green in colour, hairy, have a toothed (serrated) edge and an overall ‘spear-like’ shape – i.e. much longer than they are wide and they come to a point at the tip.  The leaves are arranged opposite to each other.  Plants may reach a height of about 15 in / 40 cm. 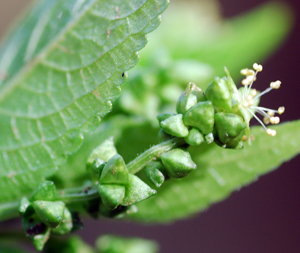 There are separate male and female plants (i.e. the species is dioecious).  The flowers are born at the base of the leaves (not dis-similar to nettles). The flower spikes (about 1 to 1½ inch long, stalked tassels) appear between February and May.   The catkin-like male flowers have a yellow colour, due to the many yellow stamens (see photo), and the female flowers have 3 tepals (a term used when petals and sepals are the same or indistinguishable).  It is one of the first plants to ‘bloom’ in the Spring, shortly after its shoots push their way above ground. When the fruits form, they are hairy.  The seeds are quite large (about 3 – 4 mm in diameter) and 'offer a meal' to small mammals and birds.

The smell or scent of the plant is often described as ‘foetid’.  This is probably due to the presence of chemicals such as trimethylamine, a compound that can give an aroma not dissimilar to rotting fish.  The plant is toxic / poisonous.  At one time, the leaves were used to make dye. Though dog's mercury is a member of the Spurge family (and related to wood & purple spurge), it does not have the usual ‘milky juice’ in the stem. 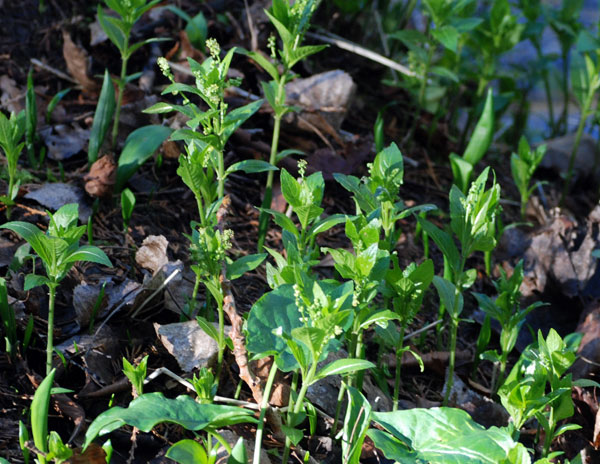 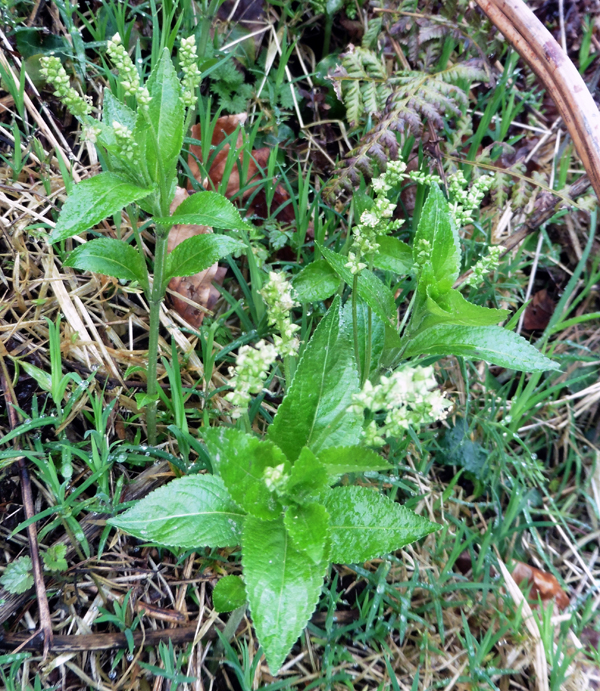 Our young springer eats it whenever he gets the opportunity, we try and keep him away from it but it is difficult, he loves to get off lead and to keep him tethered all the time is not really an option as its in the breed to explore and dart about everywhere. Thankfully he is sick when he does eat it so not in his stomach for long but its still a worry, I’m considering a muzzle but he hates a halti or head collar so doubt that would work.

Our Belton Setter Alaska has been hunting out this plant & eating some right from the beginning.
Recently used “PlantSnap” on my phone to find out what it actually was. She’s never been sick though.
Trust her to be eating a poisonous plant !

I read somewhere an account by someone who mistakenly ate dogs mercury as a salad plant said that it caused excessive salivating (precursor to being sick perhaps..). I therefore pose that maybe this symptom is why dogs eat it – as a means to in research their body cooling when out hunting????

My whippet and friend’s whippet have just had a veritable dog’s Mercury banquet followed by vomiting a few minutes later. I believe that it was given as an emitic in herbal medicine so maybe they did it as a self medication? Or maybe they are just dumb!

[…] as they wash themselves far more than dogs do, but dogs do still produce them sometimes. On another website there are numerous accounts of dogs eating this plant, however none of them mention the expulsion of fur balls[…]

My Border x Patterdales constantantly seek this out in our wood and snatch sneaky mouthfuls when we’re not looking.
Generally they’re ok but if they eat too much it makes them sick!

Week 4 – Four Seasons In The White and Dark Peak

My lurcher actively tries to lead us towards the specific part of the woodland where this grows when we’re walking, but hasn’t suffered any ill effects that I’m aware of yet…
Oddly, she only eats certain leaves off the plant, normally the bigger and greener ones. My question is why is it so attractive to dogs?
There doesn’t seem to be any obvious smell coming off it, or not that a human nose can detect.

My 10 year old border collie has started eating this with relish, almost every morning, and he is sick within half an hour. I don’t think he has it in his intestines long enough to absorb any toxins. My concern is WHY is he so keen? From what others have said it seems it is just attractive to them. Has any one found any other reasons. My boy has also been known to gobble up stinging nettles.

[…] mercury. Wikipedia suggests that it is because dog can mean false or bad however a website  http://www.woodlands.co.uk/blog/flora-and-fauna/dogs-mercury has a number of comments describing how peoples’ dogs find the plant irresistible although […]

Dogs mercury: the real dogs dinner? | The Nature of dorset

My dog has been seeking this out and eating it.
She has not been sick or shown any side effects.
Will have to stop her now.

I am increasingly concerned that my six year old border collie is poisoning herself with this plant. She has eaten it with enthusiasm since I got her, aged 2. I have tried to prevent her eating it since identifying it and reading that it is highly toxic. Only once has she vomited with it. However she suffers from a recurring unidentified complaint at regular intervals, I now realise only in the spring and summer. She scuttles about, looking at her back legs and licking her thighs. Then she takes to her bed and won’t move, even to eat. After a few hours she gets up and is back to normal. Does anyone else recognise these symptoms? I would like there to be more publicity about dogs mercury, especially as so many dogs appear to find it irresistible.

[…] green of dog’s mercury and wild garlic fills the eye grown dim with wintry grey. All the violets, wood anemones, […]

It’s getting steamy in the hedgerow – Enjeux énergies et environnement

[…] as they wash themselves far more than dogs do, but dogs do still produce them sometimes. On another website there are numerous accounts of dogs eating this plant, however none of them mention the expulsion of […]

[…] patch of dog’s mercury held to a grass slope that had been scraped last winter to bare earth. These plants were raising […]

[…] patch of dog’s mercury held to a grass slope that had been scraped last winter to bare earth. These plants were raising […]

I have just been on my jollies with Mum and Dad and my brother Sam. I am a Border Terrier and wolfed down this plant in the woods as did Sam who is a Labrador. I puked up on the way home a couple of times but he kept his in until after his dinner that night. We were staying in a very nice holiday cottage and luckily the kitchen floor had limestone tiles – my Dad had to clean up quite a bit over the next few hours – he said the floor had probably never been so clean!
Mum knew what the plant was called so we were able to look it up and couldn’t believe when we read about all the dogs who also love to eat the leaves.
Mum says we’ll not be allowed to eat any more from now on. Seriously though Mums and Dads please look out for it as we have no willpower and the smell is so attractive…

My young Welsh Springer has just recovered from being very ill with symptoms of continual vomiting causing dehydration, my Vet was very concerned and even did an exploratory operation thinking she had eaten something which had caused a blockage. After spending two day s on a drip and much tender loving care she pulled through and is now back to good health. I had noticed that she had been snatching mouthfuls of dogs mercury when on walks through a nearby wood. I am convinced that this was the cause of her illness and I now keep her well away from the plant. Was it called ‘Dogs Mercury’ because dogs are attracted to it, I read with interest how it gives off a smell which is obviously attractive to dogs. Perhaps it would be good for more people to be made aware of this plant.

Well, apart from anything else it is always described as a shade tolerant species. So, one might anticipate that rhizomes might be inhibited by light. Will try to look in J of Ecology to see if anything has been published …….

What are the evidence that suggest high light intensities inhibit the growth of the rhizomes?

hi headhunter, we are petersfield so similar area. it at Queen Elizabeth country park, staunton house and stanstead house gardens.. we have to avoid them as my dog is determined to scoff the stuff even on the lead.

Similar problems with a young Black Labrador Retriever – are quite a lot on two occasions in the Spring (when its odour is strongest)and vomited within the hour. Vet did blood tests – all OK. Now still tries to eat it but we keep her on a lead and try to discourage. Also tend to avoid places where it abounds but difficult on the West Sussex/Hampshire borders. It is fairly ubiquitous and spreading. There should be more awareness of this. It is obviously attractive to dogs and anaemia or renal failure are difficult to spot until quite advanced.

My whippet has been looking out for dog’s mercury since early spring. As we walk along he grabs a leaf. It has made him sick within 10 minutes. So, of course, I try to keep him from road edges and the woods.
He also is partial to goose grass, especially when it is fresh in early spring. This seems to do him no harm.

Hello, Sue. Useful information from the poisons registry. As I said earlier my dog ingests dog’s mercury — and is not sick. I have to keep him on a lead in the woods and keep an eye on him in shaded lanes. There’s lots of it here and it seems to travel well. It is a bit restricting. I considered a muzzle but, like you, I’m not keen — people assume the worst — and he also likes eating the new long grass, which doesn’t make him sick either.