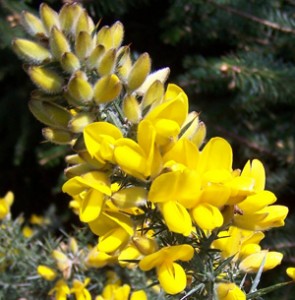 One plant that is currently adding a bit of colour to our lives is the Common Gorse - Ulex europaeus.  Brooms (Genista sp), Whins (Cytisus sp) and Gorses (Ulex sp) are all evergreen shrubs, with yellow flowers.  They are members of the Pea Family or Fabaceae - (formerly the Leguminosae).  Many members of the pea family have root nodules - which contain symbiotic nitrogen fixing bacteria.

Whilst, the Common Gorse can be found in flower in late autumn and even in winter, it is in Spring that it flowers most strongly and profusely.  The flowers are said to have a coconut aroma.

It is said that Linnaeus (Swedish botanist and plant taxonomist) was 'enchanted' by it when he encountered it - on Putney Heath.  Common Gorse occupies a different niche to that of our other two species of Gorse, the Dwarf Gorse (Ulex minor) - a plant of heathland in the South East and the Western Gorse (Ulex gallii). 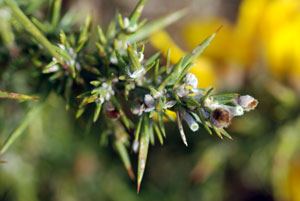 Common Gorse can be a plant of  the wood margins / edge, but it may also be found in tracks through woodlands.  It can grow in the company of various grasses (Common Bent, Yorkshire Fog, Sweet Vernal Grass), common dog violets and sheeps sorrel. It may be found growing on cuttings for new roads and highways, and gorse scrub is not uncommon on exposed sea cliffs.

The dwarf gorse has somewhat more delicate spines and smaller flowers than the common gorse - the western gorse falls somewhere between the two (but is not a hybrid).  The Western Gorse is , as it name suggests, found on the western side of the U.K. (but also near the coast in East Anglia).

Common Gorse is a spiny, evergreen shrub.  Its spines may be branched and furrowed.  The plant has 'normal' leaves only when very young - small trifoliate leaves. A mature gorse may reach a height of some 2 metres (or more - the form of the plant being quite 'plastic' and heavily influenced by soil and local climate). Gorse can form impenetrable clumps. 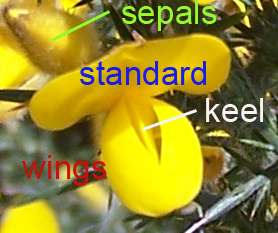 The flowers of gorses and brooms are complex and specially adapted for insect pollination. When a bee alights on the lower lips (keel) of the flower , these petals are depressed and the underlying stamens release their pollen onto the body of the insect.  The big petal at the back of the flower is called the standard, and the two smaller ones to the side are the wings. The sepals (calyx) are also yellow. 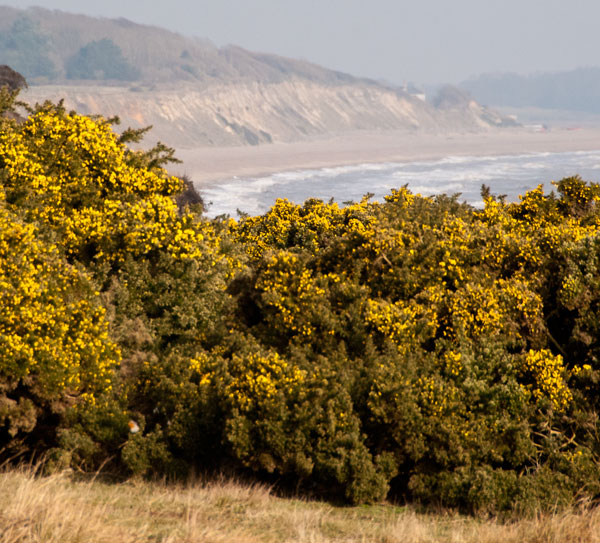 Gorse at the coast in East Anglia 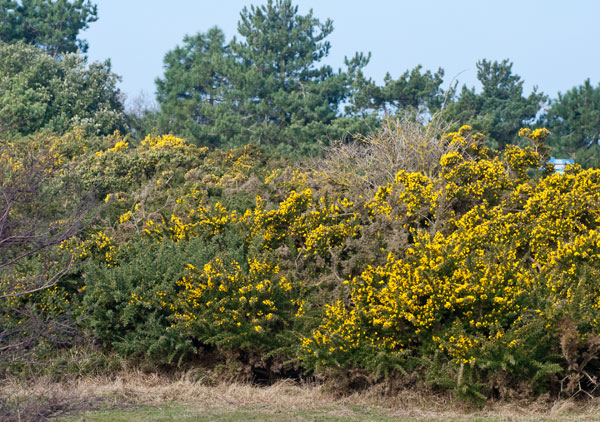 Yes,I remember seeing all the gorse in New Zealand. I think it was introduced to make quick hedging for the sheep.
There is a saying which says that when Gorse is out of flower, kissing is out of fashion. This obviously relates to the fact that Gorse is never totally out of flower.

Gorse was introduced to New Zealand over 100 years ago and has flourished in the warmer climate. Unfortunately although it has beautiful flowers it’s growth under the warmer climate means it is now regarded as a weed. Instead our native woodlands (forests) have the bell shaped flower of the Kowhai to add the natural beauty of yellow flowers.

Gorse | Science on the Land