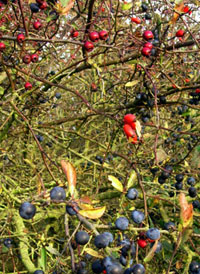 Why do hedgerows exist?  Many were originally planted to contain livestock (sheep, cattle, pigs, chickens), others existed to define boundaries – who owned which parcels of land.  Hedges often delineate fields; field is derived from the old English feld which means an area of felled trees.  However, hedge construction and management was particularly associated with the process of enclosure, which transformed the landscape of England.  This was often connected with the change of land use - from arable to pasture for sheep.  It can be dated back to Tudor times, and though there were voices raised against it (because of reduced grain production, displacement of agricultural workers), the process of ‘inclosure’ continued throughout the C17th, culminating in the Inclosure Consolidation Act of 1801.  Open fields and common land were enclosed by hedgerows.  One estimate is that some 200,000 +  miles of hedges were planted in the hundred years running up to 1850.

The ‘opposite’ process occurred in the twentieth century.  Hedges were removed and larger fields were created – to accommodate the machinery associated with intensive farming techniques.  In the 50 years following the end of WW2, it has been estimated that a quarter of a million miles of hedgerow were lost.  There are policies in place to halt or even reverse the loss of hedgerow. 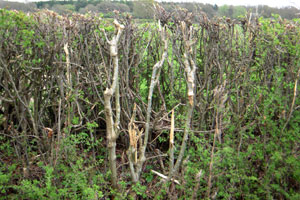 The importance of hedgerows was acknowledged with introduction of The Hedgerow Regulations 1997; these were to protect species rich hedgerows and those that were of importance in the context of local archaeology, history or landscape – i.e ancient hedgerows.  Other hedgerows may come under the definition of priority habitats.

Sadly, many hedgerows may be lost or changed fundamentally through either neglect or poor management (flailing, over-zealous trimming).  Hedgerows should be cut on a 3 year cycle - one side, next the top and then the other side) - this allows time for the flowering and fruiting of shrubs and other plants. 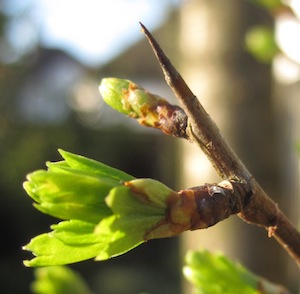 The most commonly used hedgerow plant has been the hawthorn .  In anglo-saxon terminology it was hagathorn = hedge thorn; it is also known as the May Bush. In Spring, it is covered with white blossom whilst in the autumn these are replaced by shiny, red haws (see featured image).  Because of its spiky nature, it is particularly good shrub to use for stock fencing – it discourages browsing.  Blackthoorn is similar.  However, it differs in that it produces flowers before its leaves open and unfurl – the flowers sit on ‘naked’ stems.  In the autumn, the same stems bear fruits – black sloes (much coveted for the making of sloe gin.  Other shrubs to be found in hedgerows are hazel and field maple.

Intertwined between the shrubs may be bramble – a vigorous rambling plant whose fruit, flowers and nectar provide a valuable food source for many birds, small mammals, butterflies and other invertebrates.  Within hedgerows, there may be trees such as oak, elm, holly, rowan and ash but not so many as to shade out other plants.

Also in the hedge there may be a number of woodland species – such as woundwort, jack by the hedge, hedge bedstraw, hedge mustard. 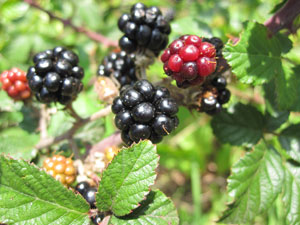 Hedgerows, which are species rich in terms of their plants, provide habitats (such as the litter at the base of the hedgerow) not only for spiders, butterflies, bees, stag beetles (in decaying stumps), and spiders but also shelter (and food) for small mammals such as wood mice, bank voles and larger animals such a hedgehogs.  Hedgerows are also homes / songposts / display sites or feeding stations for many different birds – blue tits, robins, blackbirds, dunnocks etc.

The Council for the Protection of Rural England (CPRE) is concerned that the hedgerows regulations only apply to important hedgerows and would like the 'protection' applied to more hedgerows.

It has been estimated that many thousands of miles of hedgerow have 'disappeared'  in recent times.  Some have become lines of shrubs and trees, others have been degraded by flailing or through neglect.

[…] declined dramatically between 1750 and 1850 as many common lands / meadows / grasslands were enclosed and then ploughed up – for arable crops. These losses were described back in the C19th by the […]

[…] hedgerows. ~ by Chris The importance of hedgerows in the maintenance of biodiversity cannot be over-emphasised.   Hedgerows provide vital food, in […]

Perhaps have a look at
http://www.woodlands.co.uk/tv/2008/09/hedge-laying/
also
this ‘old’ link might interest
http://archive.defra.gov.uk/foodfarm/landmanage/landscape/documents/hedgerow-survey-handbook.pdf

Is it possible to write an article of the construction of hedgerows and the different techniques, species etc. people have used in the past and today?