You are here: Home > Blog > Flora & Fauna > Invasion of the land : mosses, bryophytes and climate change.

Invasion of the land : mosses, bryophytes and climate change. ~ by Chris 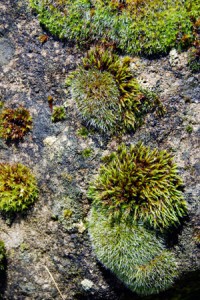 The ‘usual’ explanation is that the global temperature began to fall when land plants in the form of vascular plants (ferns, tree ferns and similar) began to take in vast quantities of carbon dioxide for photosynthesis – ‘locking’ it up in the form of carbon compounds (sugars, cellulose, lignin – some of which later became coal).  As the carbon dioxide level fell so polar ice caps began to form.

However, Professors Lenton (Exeter University) and Dolan (Oxford) have proposed a slightly different formulation of this model.  Their research team used the moss, Physcomitrella patens , in their study.  Using incubators as environmental chambers, they placed rocks with and without moss into the incubators for some months and monitored the effects of the mosses on the rocks.

They have suggested that a critical event leading to the reduction of carbon dioxide levels was the invasion of the land by the first ‘simple’ land plants.  These would have provided a ‘carpet’ of greenery of plants , not dis-similar to our present day mosses and liverworts (Bryophytes). 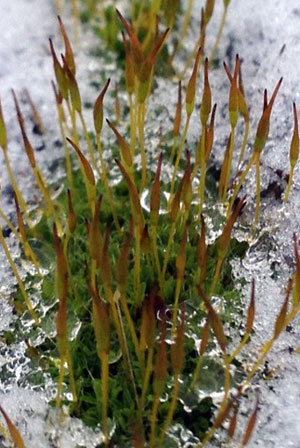 (1).    The first land plants interacted with the rocks – inducing a form of chemical weathering.  This leads to the release of elements like Calcium and Magnesium from the rocks, which in turn interact with carbon dioxide in the atmosphere.

(2).    The plants also released phosphates and iron, which would have washed down into the seas and oceans, where they would have ‘fuelled’ the process of photosynthesis in the algae of the surface layers.

arly land plants would also have an appetite for carbon dioxide, absorbing it from the atmosphere, again for photosynthesis.

These various processes would contribute to a significant fall in the level of carbon dioxide in the atmosphere, and the consequent change in climate.  So the early simple land plants, such as mosses and liverworts etc were important players in the geochemical cycles of these eperiods in the earth's history – affecting significant climate change.  Just as the woods, forests and algae of the oceans are major players in the uptake and circulation of carbon dioxide today- so many millions of years ago,  simple plants like the mosses and bryophytes had a central role in the ‘adjustment / control’ of climate. 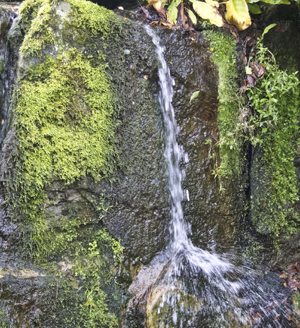 Mosses and liverworts may not be a dominant life form nowadays but they are still to be found in our hedgerows and woodlands, contributing to the diversity of life  and offering micro-habitats for various insects and other invertebrates.

[…] may not be a dominant life form nowadays but they are still to be found in our hedgerows and woodlands, contributing to the diversity of […]

a fine write up, Bryophytes are a fascinating plant range with very little in the way of coverage, especially within the gardening circles.