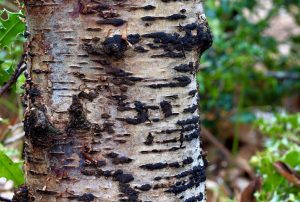 Overlooked and understudied. We can say that about many aspects of the natural world, not just fungi. However, for those hard, black, carbonaceous types falling within the wider category of pyrenomycetes, this is especially true and, alas, appears to have ever been thus.  The Rolfe’s showed no love for them in their 1925 book The Romance of the Fungus World, writing that “in this order are a great number of fungi which are of little interest to folk other than those engaged in their actual study. Most of them are small, and even the larger ones are far from attractive.”

Little seems to have changed since, alas. Modern field guides tend to shun all but a select few of the more characteristic examples from their pages, such as King Alfred’s Cakes, Candlesnuff and Dead Man’s Fingers , and even one of my top recommendations for more thorough primers on the world of mycology, Pat O’ Reilly’s Fascinated by Fungi , glosses over this group. 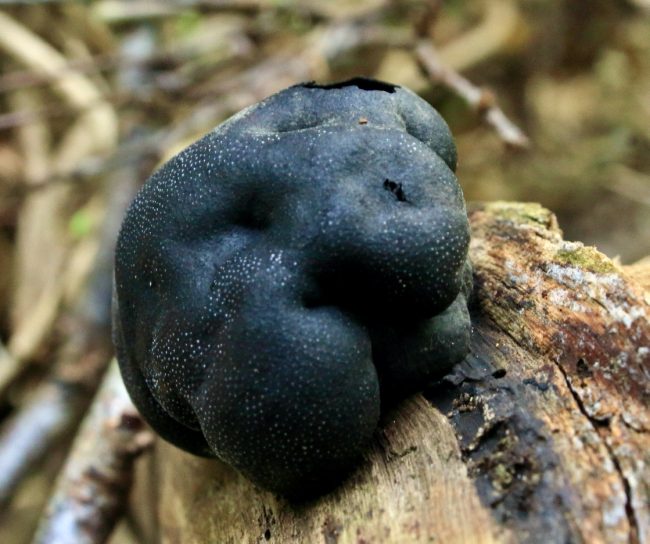 There are good reasons why we might not stop too long to scrutinise the Beech Woodwarts, the Common Tarcrusts, the Oak Blackheads and their ilk. The most obvious is that they are clearly not edible, which still seems to be the primary appeal for most who develop an interest in fungi. Another is that you will see these types everywhere, typically on dead wood such as fallen branches, and throughout the year too, to the extent that they tend to blend into the scenery unless you are really looking for them. And finally, they do all look rather similar. Unless you really get up close and personal, most of us will fall in line with the Rolfe’s view that they are “far from attractive”.

Even within more active mycological circles, I’d say there are more out there who would rather dive headlong into the world of resupinates, which at least have the virtue of colour to attract the attention. However, despite the flat spreading patterns of many of the hard, dark and rigid types of this month’s focus, species like the tarcrusts and Brittle Cinder fall outside this broad category of crusts in that they belong within the ascomycetes division of the fungi kingdom – the spore-shooters, which develop their spores in long tube-like sacks, or asci. 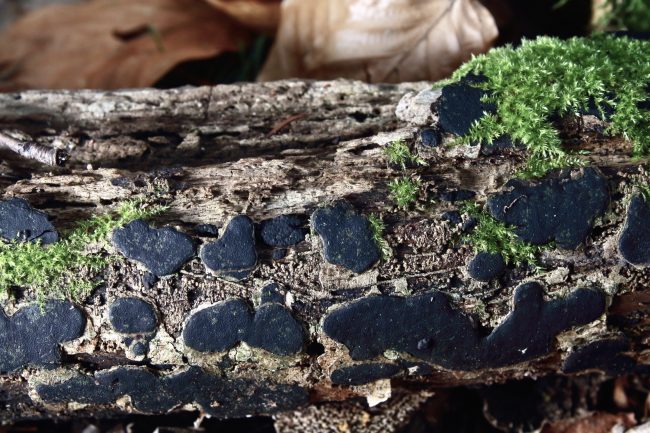 Hard, brittle crusty fungi like this Nemania species tend to blend into the woodland background and are a challenge to identify

Getting a bit more thorough with the definitions, the species referred to in this post all fall within the larger category of ‘pyrenomycetous fungi’, described by Jens H. Petersen and Thomas Laessoe in Fungi of Temperate Europe as “with small, mostly spherical, flask-shaped or sac-like fruitbodies with an opening (ostiole) from where the spores, in most cases, are shot out. The fruitbodies here are all termed ‘perithecia’.”

Let us put it complete out of our heads for the moment that there are a good number of pyrenomycetous fungi that are not black, hard and carbonised and grow on wood, and look at this idea of perithecia. Often we think of ascomycetes fruit bodies, or ascocarps, as disc-, cushion- or cup-shaped, with the asci contained within the outward facing spore-releasing surface, or hymenium. I described this kind of ascocarp, known as the apothecium, in December’s fungi focus on the Holly Speckle . 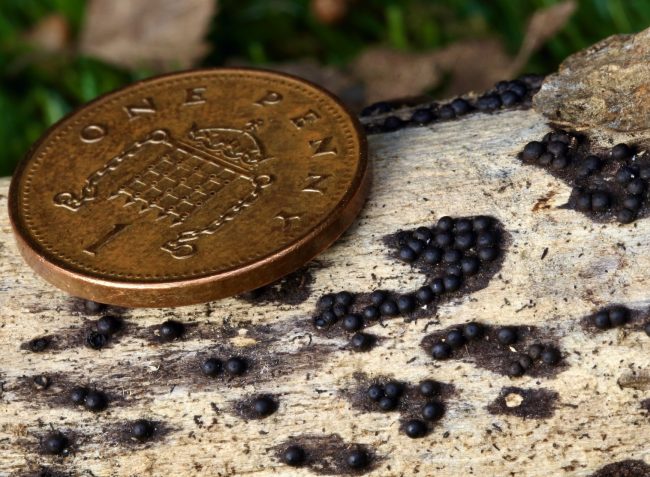 The perithecia fruitbodies of Rosellinia appear individually, and so are described as non-stromatic

The perithecium is formed instead as a small, more or less spherical shell which houses the numerous asci tubes, which in turn contain the spores. The perithecium has a tiny round opening called the ostiole from which the spores are released, which often is prolonged to form a short tube.

There are many many pyrenomycetous species where these perithecium grow individually. To give an example of the hard black types, we have numerous ones in the genus of Rosellinia, where the perithecium is relatively large, often around 1mm in diameter, and a little more in height. As the name of the specific species of Rosellinia mammaeformis  suggests, one of the means of identifying pyrenomycetous fungi is to look at the ostiole at the top to check if it is papillate, or nipple shaped, or umbilicate, meaning a belly button-like indentation. 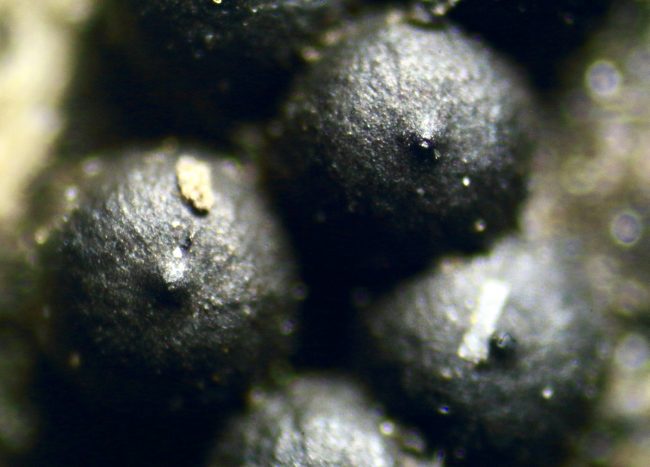 The tiny openings in the perithecia from which spores are released, as in the case of these Rosselinia, are projecting and described as papillate

Most of the examples covered in this article, however, contain hundreds of individual perithecium all housed within a single larger structure known as a stroma (plural stromata). There are an awful lot of there. The section in Fungi of Temperate Europe labelled “Hard, stromatic pyrenomycetous fungi” stretches almost 50 pages. 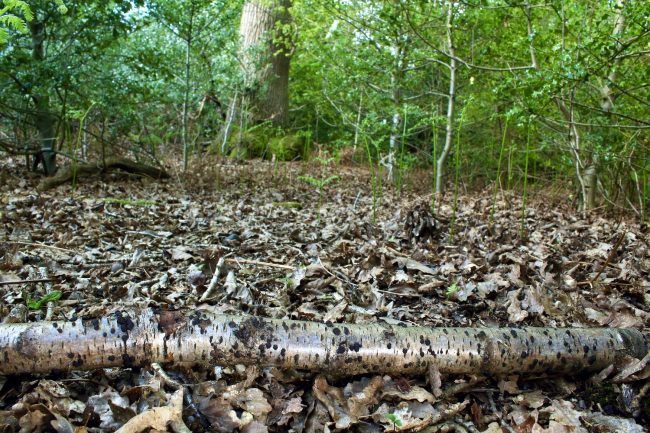 Take, for example, the Birch Woodwart, which forms black bumpy blister-like growths, or as Laessoe and Peterson put it, “very carbonous, red-brown to black stromata with obvious perithecial contours and papillate ostioles”. So each of the tiny bumps on the bumps signify individual perithecia, where the tiny holes from which the spores are released stick out, and indeed, if you scrape off the top layer of this stroma you can see inside the individual perithecia beneath. With King Alfred’s Cakes  too, the entire outer surface, if you look very closely, is covered in the tiny dots of the ostioles (here’s a fun game – leave a King Alfred’s Cake on a piece of white paper for a couple of days and see what sort of a mess the dark spores will make as they are fired out from every conceivable angle). 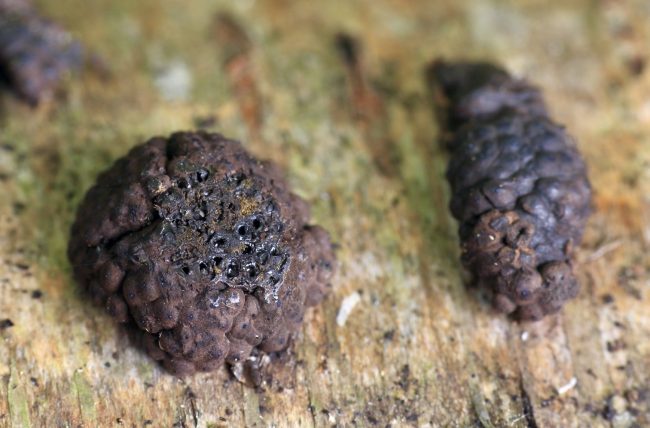 This goes to show that looking closer at these fungi reveals quite a few surprises, but you certainly need a lot of time on your hands to really get to grips with this subject. Fortunately, lockdown has provided me with a lot of time, and in this respect I’m certainly glad that I invested in a microscope a while back, which for the price of a week’s holiday has given me the opportunity for many hours of exhaustive exploration of the mycological microcosmos not a million miles from my front door.

The dry weather of the past few months has also meant there has been precious little else in terms of fungi out there: May and June are never that fruitful at the best of times, but I’m struggling to remember the last time it actually rained here in the southeast, hence the reason for focussing on this seemingly rather “dry” topic. The hard surface of these pyrenomycetous fungi is considerably more durable that your average mushrooms, which tend to fruit in cool damp weather then decay, desiccate, get squashed or get eaten within a matter of days, leaving a very limited window of opportunity for the spores to be released. Birch Woodwarts or King Alfred’s Cakes could feasibly be slowly leaking spores into the atmosphere to get carried by the wind and help it reproduce throughout the entire year, and with no risk of ever drying out. 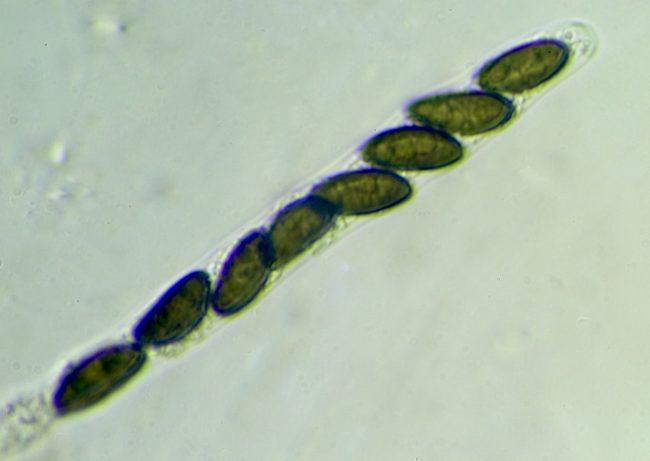 There are literally hundreds of these species out there and they continuously seem to be getting re-taxonimised or re-classified, not according to the way they look or other evident physical characteristics, but by molecular taxonomy. For example, Birch Woodwart was formerly known as Hypoxylon multiforme because it looks like other species such as Beech Woodwarts (Hypoxylon fuscum), except that it grows primarily on birch. Then in 2005 a new genus called Annulohypoxylon was described for those with species with papillate ostioles, like Birch Woodwarts but unlike Beech Woodwarts, where they are lower than the stromatal surface. Thus Hypoxylon multiforme became Annulohypoxylon multiforme. And then about two years later, based on genetic evidence, the Birch Woodwart became Jackrogersella multiformis. 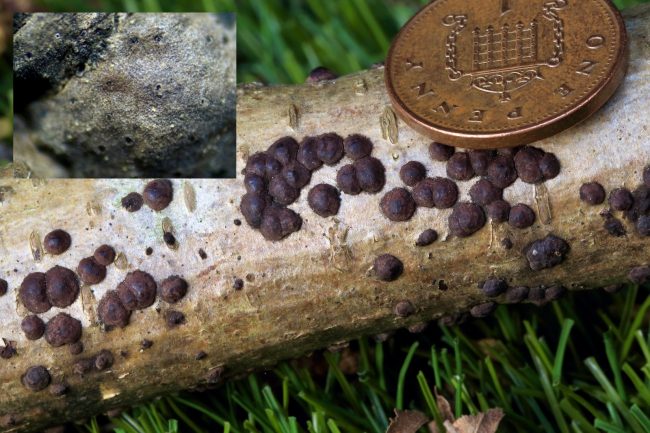 The point that has been made in a number of these posts is that the visible parts of any fungi by which they have been historically named and categorised are just the reproductive organs – in the case of Birch Woodwart, this is the stroma containing multiple perithecia with papillate ostioles. The main organism, comprised of its mycelium, is hidden from view within the substrate, in this case usually dead birch. Science is still in the early stages of discovering not only the differences between these various species, but why they are different, what is their niche or role in the wider environment, and their relationships with their hosts and with other creatures such as insects, or perhaps even other fungi... 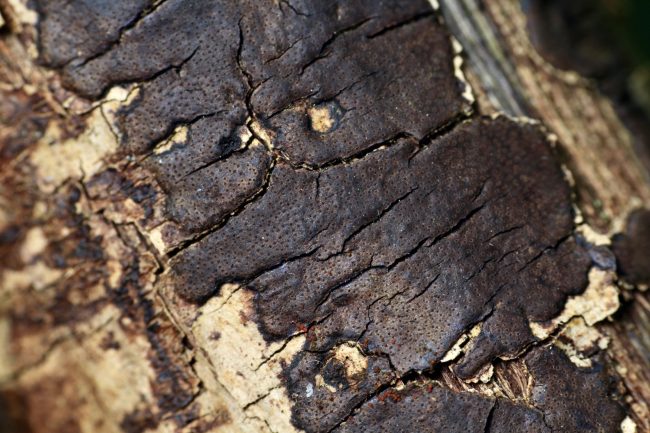 Detail of the stromatal surface of the Common Tarcrust, showing ostioles and a hidden surprise to be revealed in part 2..

The entry for Beech Woodwart in ‘Fungi of Temperate Europe’ vol 2, p. 1556 says “Occurs almost exclusively on bark of recently fallen Fagus trees, rarely on other deciduous trees” – a lot of these species are host specific and they also look very very similar, so there are a lot of factors to take into account such as pigmentation and microscopic details as well as host if you really want to get down to species level.

Came across a lovely example of what I believe to be beech woodwart yesterday….but does it grow only on dead beech wood?

Can it be found on other rotting broad-leaves, ash for example?