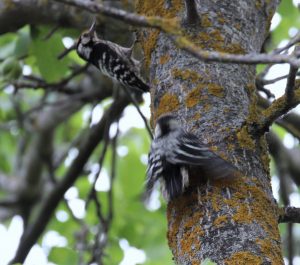 The Greater Spotted Woodpecker makes its presence felt in many ways in Woodcock Wood. The evocative spells of drumming when the male is establishing its territory; the swift undulating flight between high trees; the sustained attacks on our tit nest boxes unless metal plates are fitted around the entrance holes; and occasionally, just occasionally, the sight of its unmistakable profile on the side of a tree, or under a bough, while it is foraging for grubs and larvae in the bark. They are stunning birds seen close to, dressed in their black, white and scarlet.

The Greater Spotted is a success story. Its numbers have been increasing in UK since the 1970s and it is now relatively common in urban parks and wooded gardens. But not so the diminutive and secretive Lesser Spotted Woodpecker which is neither common, nor easy to find. In UK its distribution is contracting and breeding success has been declining.

We have Greater Spotted in Woodcock Wood, but I have only twice seen Lesser Spotted, and this was in our walnut tree at home. What they both have in common is their plumage and their inveterate excavation of holes, so much so indeed, that other birds either depend on them, or take advantage of the holes they create. The Nuthatch for instance shows a strong preference for old woodpecker holes. The female Nuthatch will  reduce the size of the entrance with a thick wall of mud (see previous blog on The Nuthatch) to discourage later raids upon the nest – the Greater Spotted has its dark side! While the Common Starling will often wait on a new hole’s completion and then take it over. 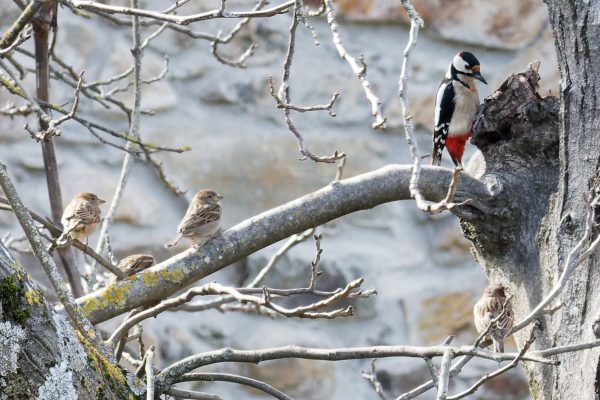 You might think that a powerful bird like the Greater Spotted could defend its home with ease, but in fact the Common Starling will often displace the Greater Spotted from its new hole, and the woodpecker starts afresh. (It is a sad fact that one of the main reasons accounting for the increase in Greater Spotted numbers is the dramatic decline in the numbers of the Common Starling.) Also, there are plenty of records of tits displacing the Lesser Spotted from a new hole. It seems that they, and their larger relative, are more likely to abandon the nest after disturbance, than defend it. 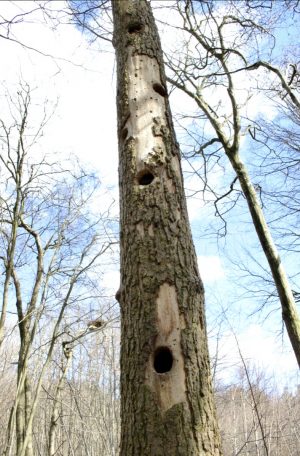 Normally the Greater Spotted will excavate a new nest hole each year. They often choose the same tree as the previous year, constructing their hole lower down the tree, as trees tend to die back from the top down, and year on year the softer wood descends. We found a fine example of this industry in a dead oak in the woodland adjoining Woodcock Wood

The Greater Spotted will use live and dead trees for their excavations, but they have a strong preference for dead trees. Lesser Spotted are more selective, and prefer dead wood, or the dead limbs of a growing tree.

As far as I know, there are only two other British species that excavate holes in trees, the Greater Spotted’s big brother the Green Woodpecker, and perhaps surprisingly, the Willow Tit. Surprisingly because the Willow Tit isn’t equipped with the mighty chisel beak of the woodpecker, but is still able to carve out a small but complete hole. Also, unlike the woodpecker, it favours living rather than dead wood - the solid texture of which is an additional defence against intruders.

In my previous blog on the Marsh Tit I discussed the challenge of distinguishing between Marsh and Willow Tits, and said their calls were the only absolutely reliable distinction. In fact this is incorrect. Hole building behaviour also distinguishes between the two species. Willow Tits will excavate an entire hole from scratch, whereas the Marsh Tit will only chip away at the entrance of an existing hole to enlarge or re-shape it.

Well, hats off to our hole-building friends. Their skill and their dedication to creating holes provides considerable benefit to less capable cavity and hole nesters in our woods.

If you do observe Lesser Spotted nesting in your wood, the research forum www.woodpecker-network.org.uk would value the information you can provide. 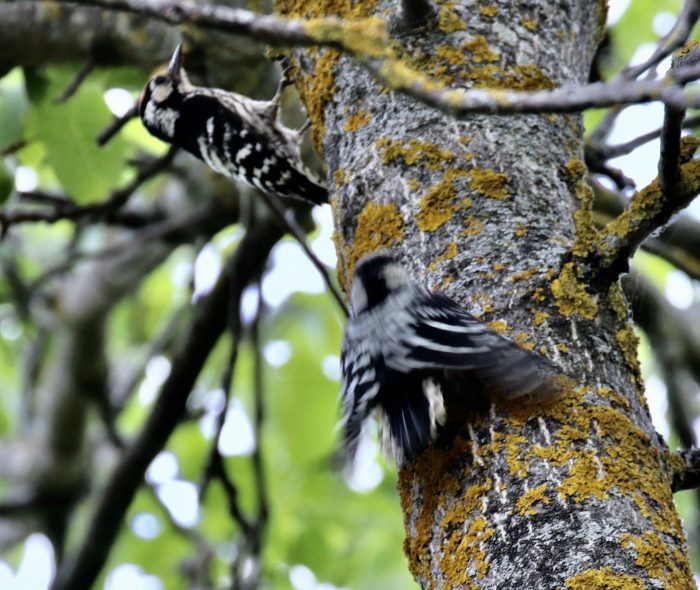