More on birds from Woodcock Wood : Buzzards, Wrens, and a lesson in photography 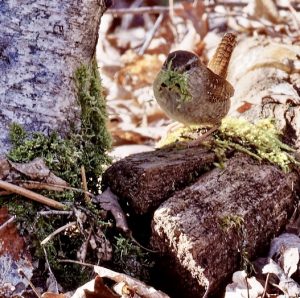 Following seemingly weeks of awful weather and awful news the 16th March was an amazing spring day, clear blue skies and gentle warm sunshine - a good day to see what was new at the wood.  As it turned out there was plenty. We heard our first Chiffchaff of the year, and saw Great Tits beginning to explore nest boxes. When we arrived the pair of Buzzards were active, and we also noticed a male Wren busy building a nest in a large insect box we were given at Christmas, and fixed close to the ground by our coffee spot.

They are confident birds, but difficult to photograph because of their cryptic colouring and speed, and their penchant for the dapple of undergrowth and nooks and crannies. However this bird was out and about, and back and forth to the box collecting moss from the base of near by trees.

At this time of the year the male will set about building a number of nests of moss, with the intention of attracting a female to choose one. If he succeeds, she will complete the nest with a soft lining of feathers. 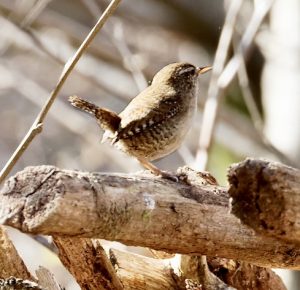 Having made his conquest the male will often move on to attract another female or perhaps two, to the remaining nests – they are routinely polygamous.

With the camera set at wide aperture and slow speed to give good depth of field I tried to capture an interesting shot or two from the comfort of a camp chair.

Over the course of the morning I was divided between Wrens and Buzzards. Often when we are at the wood we get a brief views of the Buzzards lifting above tree level, circling a little and then disappearing, either because they have soared high, or have moved to another part of their territory. But today we were lucky and they remained largely in view for an hour or so.

By midday the male was calling frequently and we saw him in full display flight with slow deep wing beats punctuated by short steep lifts and dives. This is a classic display posture used during pair bonding, and in the defence of territory against intruding Buzzards. And it works - it’s totally captivating and impressive to watch (by human and Buzzard).

It all happens so fast, and the detail disappears. But at a certain point, the male and female begin to soar, only clearly visible through binoculars. They are apparently a huge distance from each other, but in a matter of seconds they dive and meet, once twice … again the detail is difficult to recall. Their speed is incredible. 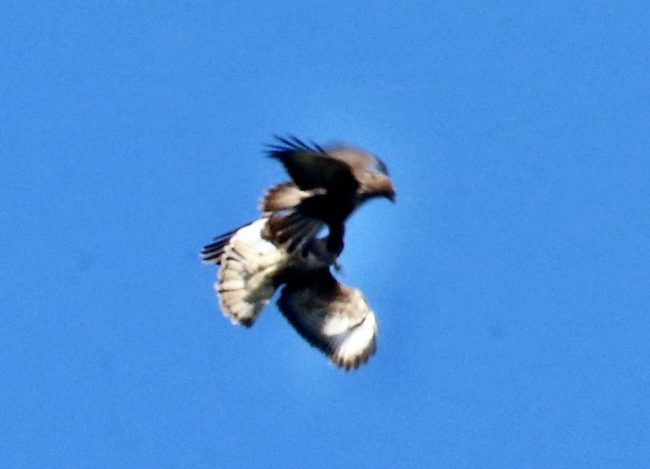 I have the camera at the ready, focussed on female, and Chris says they’re coming together, they’re coming together, now – I fire off shots and hope I’ve captured something. The result was surprising. At the point of meeting the female twists over, they briefly touch, and then move on. It occurs so fast neither of us saw the twist – it was only when we viewed the photo that we understood the manoeuvre. 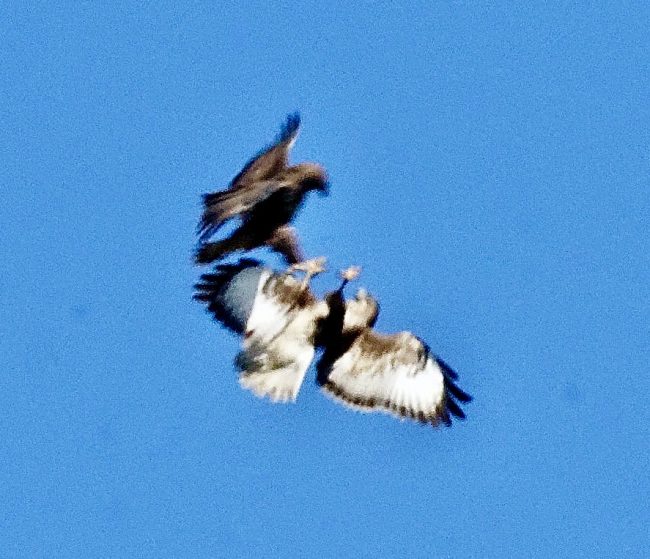 And as for the photos, shot at slow speed, perfect for Wrens in dapple, and sadly wanting for Buzzards. I was too engaged with the action to think about the camera – a lesson learned!