You are here: Home > Blog > Flora & Fauna > Phytophthora ramorum – a parasitic fungus to look out for 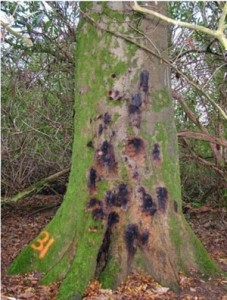 Recently I wanted to find out more about Phytophthora ramorum so I went to a seminar that was organised by Natur  (The Welsh Institute for Countryside and Conservation Management) held in north Wales.

Seminar on Phytophthora ramorum
The seminar was specifically relevant for woodland owners, contractors and countryside workers. These groups are most likely to come into contact with this disease and therefore be well placed to identify it before it becomes established in a new location. There is also the danger that these groups could become vectors spreading the disease between sites.

Phytophthora ramorum is a plant pathogen that causes disease and the subsequent death of the infected plants. It was first identified in the USA in the 90s where it caused widespread damage in California and where it earned the name ‘sudden oak death’.  The word Phytophthora is derived from a Greek root meaning 'plant destroyer'. 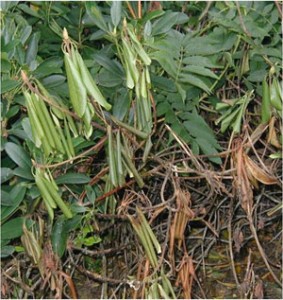 Phytophthora is a water mould that can spread through the infection of plant hosts and then the subsequent production of spores. Two types of spore may be produced on the host’s leaves – one involved in dispersal and directly infecting new plants and another that can persist and survive in the environment for some considerable time until conditions are favourable. It needs damp conditions to spread successfully and is well suited to the climate in the western UK. It can be dispersed by rain splash, wind-driven rain and in ground water. There is also the danger of it being spread through contaminated plant material and soil on tools, boots and vehicles.

Common host species and symptoms you may come across in woodlands are:
Rhododendron ssp where is blights shoot, twigs and leaves. When viewed from a distance, the plant may appear wilted. The brown-black discolouring can form a characteristic and distinctive dagger pattern that spreads from the petiole and leaf tips may also be affected.

Broadleaved trees. Different tree species have different susceptibility and different symptoms. Infected broadleaved trees that we are most likely to be infected are beech and sweet chestnut. It can affect just the bark (as in beech), just the leaves (as in ash) or the bark, leaves and shoots together. Typically, bark infections appear as large brown-black cankers on the lower portion of the trunk that seep dark-red sap. 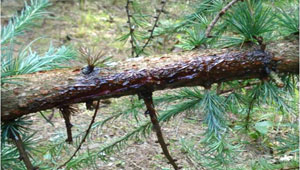 Conifers.  So far in the UK this has only been found to affect larch. Symptoms include: needle infection, shoot dieback and cankers on the branches and trunk. Infected shoot tips wither and wilt and infected needles appear blackened.

Bilberry (Vaccinium myrtillus). Where this is affected there are necrotic brown stem lesions, occasionally seen as bands on the stem. Leaves can also be affected – black lesions may extend from petiole into leaf.

Phytophthora ramorum as a biohazard.

What can you do about it?  The main thing is to be aware - keep an eye out – and become familiar with the symptoms described here.  If you find any cases of Phytophthora ramorum you should report its suspected presence to FERA (The Food and Environment Research Agency) and/or the Forestry Commission – particularly if it is a tree species that is infected.

When working on known infected sites you should obviously comply with relevant signage. If infection has been found at a particular site then it should be well indicated by signage and exclusion areas.  If you are working at one of these sites then following precautions should be taken which means cleaning boots and vehicles with a recommended disinfectant such as “Propeller TM” which contains industrial methylated spirit (see the excellent Forestry Commission pdf on the topic of biohazard control).

It may well be that this sort bio-security will become routine when visiting or working in the countryside if  Phytophthora ramorum becomes more widespread.

There are a number of detailed leaflets available from the Forestry Commission, for example, http://www.forestry.gov.uk/fr/INFD-737ESG

I have recently started looking more into this disease as it now appears to be attacking many garden plants as well as the species listed. Having just read here that it was 1st discovered in Port Talbot in 2010 – I just had to step in and say – that is wrong. It may have took them several years to want to admit they had a problem and to confirm what was killing the local forests but many of the local forests around South Wales had many dead and dying trees from way before 2005.
I understand that they didn’t want to seem to be scaremongering – but informing and asking the general public who walk in the wilds to report such areas would have given them much more knowledge into the scale of this.

Thanks for the feedback Richard, very helpful

The advantage is it’s a small wood and therefore easily managed. Larch is a crop and sooner or later would be taken out for timber. P. ramorum may or not not appear, just means a slightly different management plan brought forward. Get to know the wood over a full year, start planning the replacements from natural regeneration with some planting (all grant aided) and gradually take out the larch. Quite an interesting project, there’s lots info out there including the Continuous Cover Forestry Group CCFG ( http://www.woodlands.co.uk/blog/practical-guides/what-is-continuous-cover-forestry/ ), and ( http://www.forestry.gov.uk/pdf/fcin063.pdf/$FILE/fcin063.pdf). “Managing Your Woodland for Wildlife” is a good place to start (http://www.woodlands.co.uk/owning-a-wood/managing-your-woodland-for-wildlife/)
Richard

I am currently in the process of buying 3 1/2 acres of predominately Larch trees in North Wales. I have read this disease is usually found in Japanese larch but have been told by the Forestry Commission in Wales that it could affect all Larch trees. My dilemma is do I go ahead with the sale as no one seems to know what will happen with this disease of if it will spread to all of the UK. Any feedback welcome.

Acute Oak Decline (AOD)
This disease is demonstrating a potential threat to the future of our iconic Oak. ‘Best Practice’ guides and other useful information to growers can be accessed via http://www.forestresearch.gov.uk/oakdecline

Woodland Heritage have recently launched an appeal to raise funds for vital research into the causes and to find a way to understand and tackle this disease.