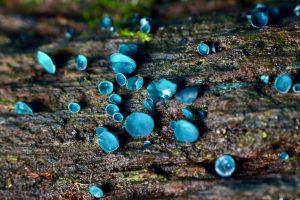 I love this time of year. At the height of summer, wooded environments can feel gloomy, humid, oppressive and swarming with mosquitoes and other biting stinging things. September marks the seasonal tipping point when these habitats take on a new lease of life, as the things begin to cool down a bit and the more colourful and easily recognisable mushrooms, toadstools and other fungal forms start popping up in earnest. Of course, the fungi themselves have been there throughout the year. These fruiting bodies are only their temporary manifestations, like ghosts - transient hints as to the complex invisible processes and interactions constantly at work beneath the surface of the forest floor or whatever woody substrates that play host to the larger organisms. It is only in the coming months that we might truly appreciate the huge diversity of the plethora of species harboured within the fallen log that we might habitually take rest on, or the rotting fence post or tree stumps or whatever else that we use to orient ourselves around our favourite woodland haunts.

There is one particularly striking exception to this rule that it is nigh on impossible to locate and identify a specific fungi when they are not fruiting and when the organism is in its vegetative state of a branching mass of tiny hair-like hyphae cells known as the mycelium that infiltrate invisibly throughout its substrate. You may well have come across well-rotted fallen branches with a distinctive copper green tinge standing out amongst the woodland litter. Pick them apart a bit and you can see this Verdigris tone is not limited to the surface, like it would be if it were algal in nature, but permeates right through the wood.

The colouration betrays the presence of the Green Elfcup throughout the year when it is not fruiting. Itis caused by a blue-grey pigment called xylindein contained within the mycelium. If you set these green-tinged pieces of wood aside in a dark damp spot in the woods where you can monitor them throughout the year, you’ll eventually notice a rash of small stalked disk-shaped cups of the same colour appearing, each ranging 0.5-1cm in diameter. These cups have a slightly felty exterior, and will eventually open up and flatten out with age.

One of the ascomycetes fungi that produce their spores in tube-like sacs covering the surface of their hymenium (the fertile part of the mushroom, which covers the inside surface of the cup in this case), the Green Elfcup is pretty enough in its own right. The blue-green tinge that the xylindein imparts to the wood, a colourisation process known as “spalting”, has an added bonus however, at least if you are a woodworker. For centuries such “green oak” has found itself deployed in marquetry. In Britain it is traditionally used in Tunbridge ware, a specialist form of decorative woodworking that takes its name from Tonbridge and Royal Tunbridge Wells, where it was particularly prevalent in the 18th and 19th centuries. 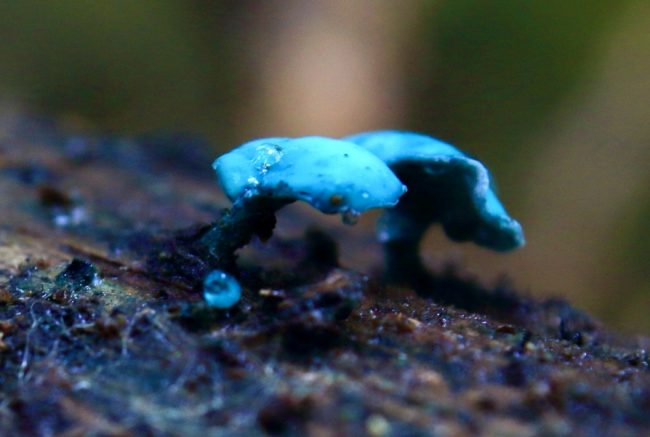 Its historic use goes wider and back further than Kent, of course, with the existence of a set of inlaid panels fashioned by Fra Giovanni da Veroni in 15th century Italy proving that the hues of the xylindein pigment can endure for centuries. For those interested in learning more about this subject, I’ll refer you to the abstract of a paper entitled ‘The Use of Green-Stained Wood Caused by the Fungus Chlorociboria in Intarsia Masterpieces from the 15th Century’ that can be found here. In the meantime, in the 21st century there seems to be some interest in the properties of this organically-produced pigment as a semiconductor. One can only guess what particular evolutionary benefit it confers to the actual fungus.

While the range of the Green Elfcup stretches way beyond Kent in the UK, it should be mentioned that the photos accompanying this article were predominantly found in this county. I should also add that my own finds have been on wood so well-decayed I doubt they have much artisanal potential. Laessoe and Peterson in my new mycological bible Fungi of Temperate Europe claim the species is most commonly found on oak and hazel, although I have to admit my own failings in tree identification are infinitely magnified when dealing with the kind of bark-less well-rotted branch fragments that I’ve encountered it on. I have noticed however that usually I’ve found it in areas rife with holly trees, so it might also tend towards this as its host, or that the dark nature of holly groves provide the kind of “damp woodlands” with “deciduous trees” described by the authors. 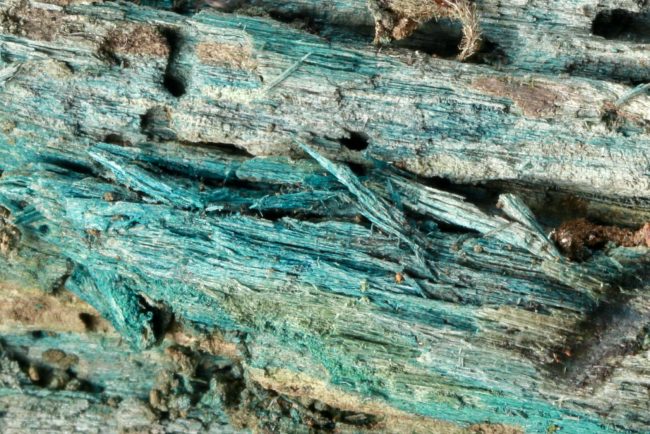 The Green Elfcup seems to fruit for a relatively long period as well, so I’ve seen photographic reports of it from across the country from as early as mid-July this year, while one of my finds from last year was as late as mid-November. And as previously mentioned, the green-stained wood can be found across the calendar.   All of this makes the Green Elfcup relatively easy to find and to identify, except for the frustrating fact for anyone who wants to go further than dipping their toes into the often maddingly murky field of mycology, that it transpires there are two near identical species, Chlorociboria aeruginascens and Chlorociboria aeruginosa – just like the Yellow Brains and the Cinnamon and Rusty Porecrusts covered in previous posts. 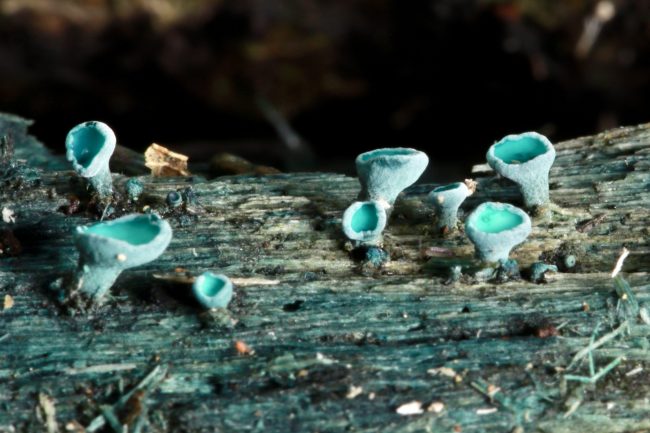 The smaller size, lighter colour and more central stalk indicates this is probably a Turquise Elfcup

Apparently there are enough physical differences for Chlorociboria aeruginosa to warrant another common name, the Turquise Elfcup (another name, the Emerald Elfcup, seems to be used interchangeably for both). Laessoe and Peterson describe this latter species as having “typically a paler hymenium”, while the stems supporting the cups are positioned more centrally, resulting in more of a goblet shape. It is also, apparently, a little bit smaller, under 5mm in diameter.

I’m not convinced such subtle macro features are really enough to distinguish the two with any certainty – do an image search for both names and you might wonder whether the differences are really that apparent or whether the particular specimens might have been misidentified by their finders. As ever, you’ll really need to go down to microscopic level if you find your curiosity really needs sating: the second type has significantly larger spores (9-16 x 1.5-3.3 µm) than the first (5.5-8 x 1.5-2µm). 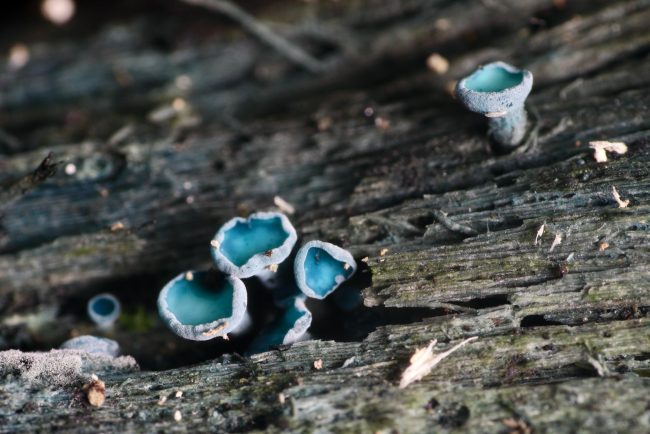 Another example of what is assumed to be Turquise Elfcup

These two are the most common examples of the green-staining Chlorociboria genus in temperate regions such as the UK. For those who really want to go down this rabbit hole, there’s a third species, Chlorociboria aeruginella, that “is much smaller and occurs on herbaceous stems and leaves from deciduous trees”, and yet another, Chlorociboria glauca, which “is a paler grey-green colour and does not stain the substrate”, not to mention about a dozen others found in other parts of the world. 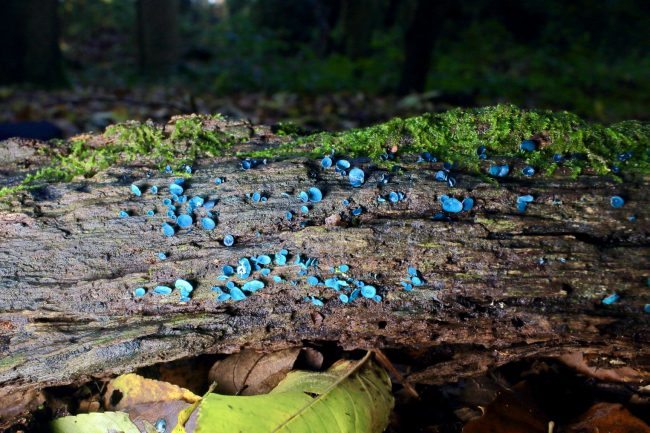 Most of us will probably be happy enough to go with the identification of Green Elfcup for all of these however. In any measure, both Green and Turquise Elfcaps are beautiful, eye-catching fungal finds that will make the day of any a nature lover, providing a bit of green in the woods as the woods themselves begin to loose their green.

Thank you
I found this magnificent Elfcup fungus Dec 21st in woodland – in Forest of Dean district, Gloucestershire

I found some Green elf cup today on a piece of rotting log in my local woodland , never knew it existed , I love the beautiful colour

I have noticed the strange colouring several times in a particular location locally. I am very pleased to find out what is the cause.

Fascinating! Thank you. Can’t wait to see if there is any in our neck of the woods…