The Monthly Mushroom – The Shaggy Inkcap 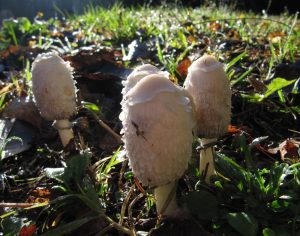 As any seasoned mycologist will tell you, there’s much more to mushroom hunting than mere foraging. The sheer beauty of their manifold shapes, colours and patterning makes many specimens ideal photographic subjects. Then there is the joy of learning how fungi are situated within a broader ecosystem, with different specimens associated with different plants, trees and microhabitats. There is also the satisfaction of positive identification and the excitement that you may have stumbled across a rare specimen in a place they’ve not been spotted before, and of being an active member of a community contributing to this still obscure knowledge base (if you wish to get more involved in this aspect, the British Mycological Society have both a website and a lively Facebook discussion group (where people post their pics). 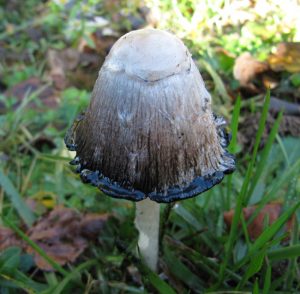 If it is mushrooms for the pot or pan you are after, it is worth remembering that there are an estimated 15,000 types of fungus found in the UK. With many identification guides providing conflicting information about the edibility of but a small sample of the most common, there is really only a handful that are truly worth the bother. It was only, for example, once I’d transferred a bounty of Shaggy Pholiota (Pholiota squarrosa) onto the chopping board and caught a whiff of its particularly off-putting musty odour that I was awakened to the gastronomical worthlessness of this particular fungi – fortunately so, as though some guides ill-advisably state it is an edible, others state the complete opposite. Its Wikipedia entry points out that it has been responsible for a number of cases of severe vomiting and diarrhoea, and that all “the afflicted individuals had consumed alcohol with the mushroom”. Luckily the smell alone put pay to any plans of a Pholiota risotto and a glass of wine.

Many of the Coprinus species, or Inkcaps, are notorious for reacting badly with alcohol, 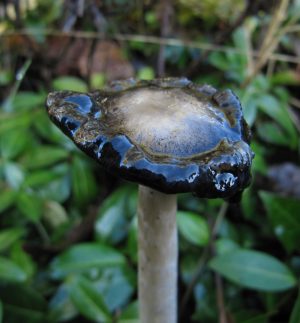 so it is generally best advised to steer clear of all of them. The culprit component is a chemical compound called coprine, and it is found in abundance in the Common Inkcap (Coprinopsis atramentaria). Basically what coprine does is inhibit the enzyme responsible for breaking down ethanol, leading to a variety of symptoms usually associated with a particularly nasty hangover, including headaches, palpitations, vomiting and dehydration. The cumulative effects of alcohol and coprine are known as ‘disulfiram syndrome’, named after a drug called disulfiram discovered in the 1920s that was used to treat chronic alcoholism by similarly stopping the body from metabolising ethanol.

The different fruiting bodies of the Coprinus genus are fairly varied in appearances, although the Common Inkcap itself could be described as belonging to the category generically referred to as LBMs, or ‘Little Brown Mushrooms’. Essentially these are the non-edible types that barely warrant a second look, so common and nondescript are they. 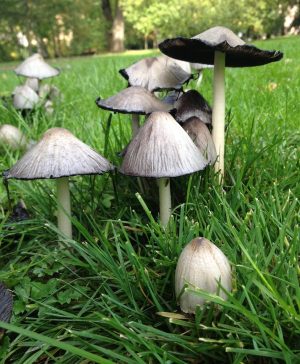 The Common Inkcap ranges from 3-7cm in diameter and is whitish-grey through light grey-brown to a muddy brown in colour, with a smooth, slightly ridged surface. The flesh of is white, and the stem is hollow and reaches about 10cm in length, while both the gills and the spore prints are black. They are often found growing in tufts on grass lawns and in parks from early Spring right up to November.

All the Inkcaps are so named because they release their spores by a process of autodigestion, dissolving into an inky liquid by which they distribute their spores (see image above). The fruiting bodies are initially ovoid, before expanding into a campanulate, or bell shape, then opening up like an umbrella before melting away into an ichorous black mush.

A fairly similar-looking species is the Glistening or Mica Inkcap (Coprinellus micaceus). The key difference is the layer of fine, crystalline particles that cover a cap ranging from an ochraceous yellow to a deeper chocolaty brown. They are more typically found in woodlands, again growing in clumps, either on decaying wood such as tree stumps or on underground roots. These fruiting bodies are said to be devoid of the coprine compound that reacts badly with alcohol, but while certainly more photogenic, they are easily enough confused with the Common Inkcap to warrant avoiding for the table. 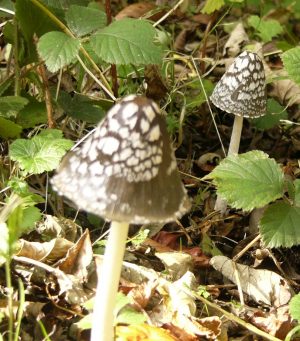 A particular striking species is the Magpie Inkcap (Coprinopsis picacea), which is readily identifiable due to the characteristic white patches growing like scales on a cap ranging from dark brown to black. They grow a lot bigger, with the bell-shaped cap ranging from 5-10cm tall, and the white hollow stem reaching 15mm in width and 25cm in height. These do not grow in clumps, but singly, usually in small groups, and typically on soil rich with organic material such as leaf litter or wood chippings, and especially in beech woods. This one most certainly is poisonous and not to be consumed at any cost

Fortunately the real culinary prize in the genus, and October’s mushroom of choice, the Shaggy Inkcap (Coprinus comatus), or Lawyers Wig, is incredibly easy to recognise. Like the Common Inkcap, it is seen growing on meadows, pastures, grasslands, even gardens. They can be found from summer to late Autumn, and are pretty common.  The cap, covered in shaggy white scales that initially envelopes most of its stem before developing its bell shape, is unmistakable. It ranges from 4-15cm in height and opens to a about 5cm in diameter. The gills are initially white, turning pink then blackening as, like the rest of the Inkcaps, it has a relatively short shelf-life before its deliquesces into a black ooze. The flesh is soft, although the white stem, again hollow, is more fibrous. If you are planning on eating it, you’ll need to do so straight away, and even then, though the taste is delicious, it will dissolve away into little more than an inky pool when cooking, which makes it best suited for soups, stocks and omelettes.

As mycological guru Paul Stamets writes in Mycelium Running, “this brilliantly white, shaggy mushroom is not likely to be confused with poisonous species. Its mild but excellent flavour makes it one of the most popular of edible mushrooms amongst hikers and mushroom hunters.” Nevertheless, sources seem to vary as to whether this is entirely comprine-free or contains traces of this noxious compound, so perhaps the key here is to abstain, at least just for one meal. 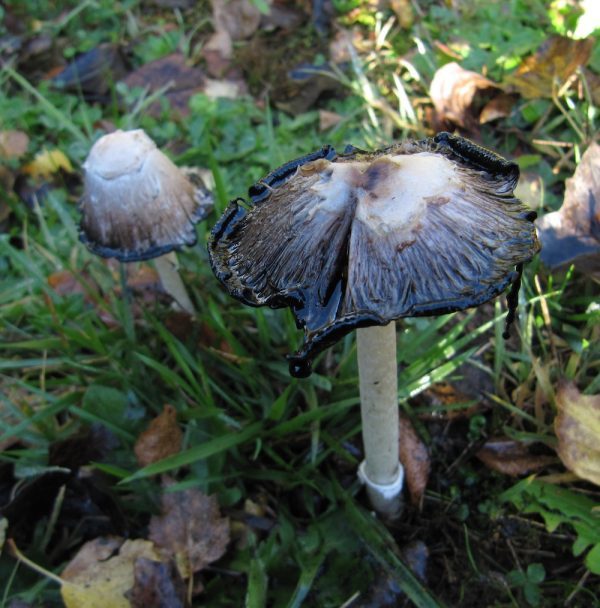 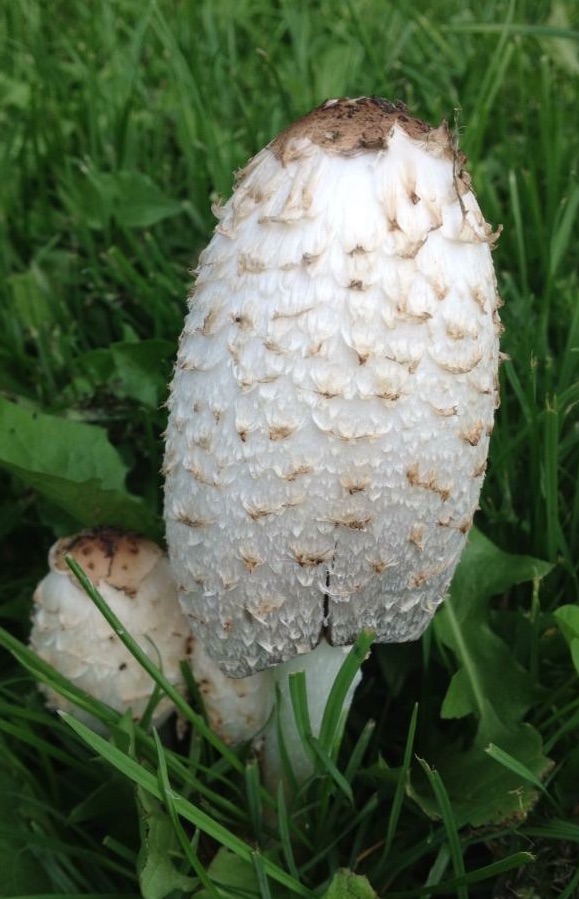 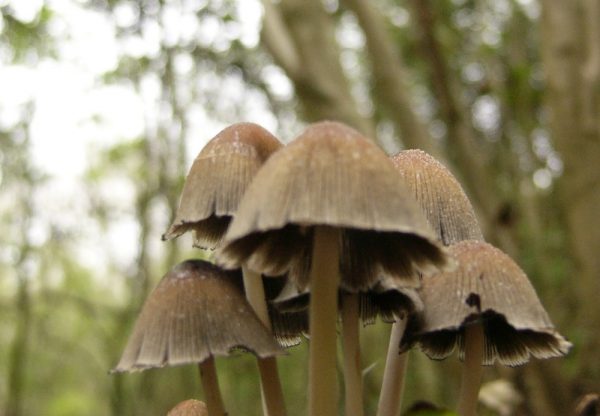 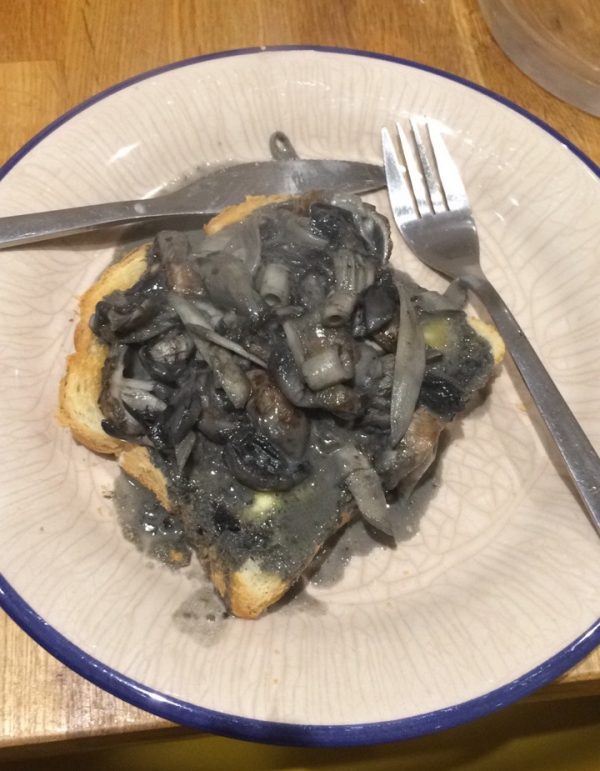 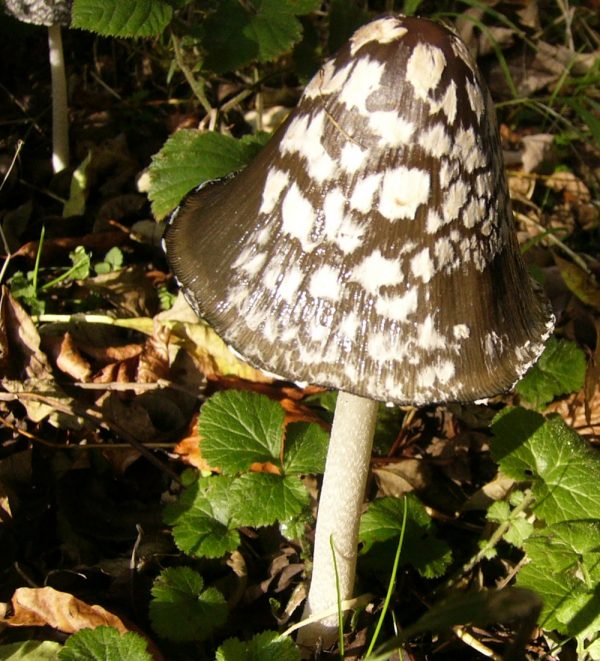 […] fruition, the mushroom itself can go through a diverse array of forms, as described in an earlier post on inkcaps , many of which go from ovoid to bell shape before the caps open up like an umbrella then slowly […]

The Monthly Mushroom: Enoki in the UK – The Velvet Shank | Woodlands.co.uk

Yes, there’s a regular patch near my home where I usually find a good stash of these at this time of year.
I too wouldn’t pick the ones in the photos – except the second one down from the main body of text. These were just to illustrate the various phases it goes through before melting into a dark gloop. I’m not sure if the inkiness alters the taste. The ones on toast were a mixture of young and old specimens, so the liquid came out in the frying pan. Very tasty though.

How timely – I opened this post just as I was making a Sunday breakfast of shaggy inkcaps on toast, with some bits of parasol mushroom for variety.

I’ve been enjoying inkcaps for over 20 years and have never had a bad reaction. OK, that proves nothing. However, I wouldn’t have picked the ones in your photos, as I only take them if they’re firm and white, with maybe a slight pink flush at the edge of the gills. I’ve never thought of the “inky pool” stage as a desirable feature for soups, stocks and omelettes (or toast, as in your photo).

Does the inkiness alter the taste?