In recent years, there has been a new entrant to the RHS list of top ten garden pests. Its ‘top ten’ list is based on the number of inquiries that it receives to its advisory service. The newcomer is the rosemary beetle, Chrysolina americana.  Despite the implication, from its scientific name, that it is American in origin, it actually hails from Southern Europe.This beetle has now become established in the London and the Home Counties, Norwich and a number of other places - map available here.

The adult beetle is about 8mm in length, and is a metallic green colour with purple stripes. Its larvae or grubs are greyish white with darker lines running along the body. The life cycle of the beetle is under study at the entomology laboratory at Wisley.

Initial observations suggest that adult beetles are relatively inactive on the host plants in June through to August, but that they begin feeding again in late August and September. 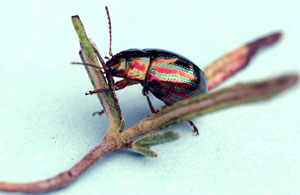 During this time, they mate and lay their eggs on the underside of leaves (these are about 2mm in length and sausage shaped). They continue to mate on warm winter days through to the Spring. When the eggs hatch, the larvae feed on the leaves for about three weeks and then enter the soil to pupate. This stage of internal reorganisation lasts about two to three weeks and then the adults emerge, returning to the host plants. Where the beetles / larvae feed on a leaf, it may turn a brown grey colour where tissue is damaged; the leaves may be reduced down to shortened stumps.

The beetle is recognised as a pest mainly on Rosemary (Rosmarinus officinalis) and Lavender (Lavandula sp). However, it can also use Thyme (Thymus sp) and Sage (Salvia sp) as a host and there is a concern that it may be able to use other plants of the Lamiaceae (Labiate) family. 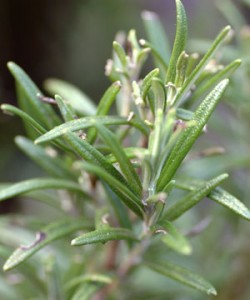 The beetle can be controlled by ‘hand picking’ of the beetles and grubs from the plants (or by using insecticides). However, bearing in mind that these plants are favoured by bees then pesticides should not really be used when the plants are in flower. As the beetles tend to be active in late summer / early autumn, then this might be a better time to apply insecticide.

To report a sighting of the beetle to the RHS, you can use this link (opens a new page)

Just found one on the biggest lavender we have. Never seen one before. South Yorkshire.

I Live in Edinburgh and have found them for the first time. They covered a lavender bush in the garden.

Just picked 6 of these, new discoveries from my patio potted lavender bush. Never seen them before.

Now bracing myself to go and look in front garden as have lots of big ground growing lavender.

I have removed 20 from my lavender 5/July/2020 in Coventry Warwickshire
Are we supposed to kill them?

I found them on my plant in Manchester today. Active in February.

Have lost one lavender and well on the way to losing two more…almost too scared to look closely at all the lavender in the front garden. Handpicking them is now a new nightly pastime…..Please can someone find a biological control.

Even the RHS site is ‘mute’ on this

Now removed over 100 by hand in Poole, Dorset. Amazing their defense tach ique of just dropping of a stem of Lavender!
How do you get rid of the eggs in September!!!!!!!

Found one today, 7th September after dousing the hanging baskets with water. One of the baskets near a small rosemary bush, no evidence of any others or damage so far. Am loath to kill it would the birds eat it if I put it on the bird table though?

I have a rhododendron bush that has been covered with this beetles larvae. Under the bush are various lupins which all failed to flower properly; instead producing little leaf and bent plumes. I live in the area of Rayleigh in Essex.

About 30 of them nestling in my formerly very healthy rosemary bush which is now looking a little sorry for itself.
This is the first year they’ve appeared. I’m in OL10, Greater Manchester.
I shook them off into a small tub with a lid but don’t know what to do with them now!

Spotted rosemary beetles yesterday in Chelmondiston, Suffolk (near Ipswich). About to check lavender, sage, thyme etc. Have prepared can of soapy water & will hand pick, as rosemary’s in flower at present.