What are Buckingham Palace Gardens like from the inside?  And what are the Royal gardeners trying to achieve? 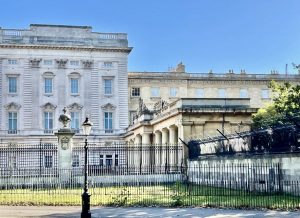 The main thing about the queen's gardens is that they are very private.  They are large (39 acres) and surrounded by busy roads but not many people get a chance to go inside and even fewer get the inside story from the horse's mouth.  So my guided tour around the gardens this week with the Head Gardener, Mark Lane, was an unusual insight, made possible by being a member of the Royal Forestry Society. Mark explained that the Queen wanted no photos whatsoever of the garden and he wouldn't even let me take a mugshot of him.  Beyond the privacy that exists within the garden, there are extensive efforts to keep it hidden from the outside - the eight gardeners and dozens of contractors have planted evergreen trees and shrubs just inside the walls to shield the gardens from voyeurs in neighbouring high-rise buildings.  And there's a lot to hide with a 3.5 acre lake, a tennis court, statues, a summer-house with its very own corgi (stuffed, I think), and a private borehole for watering and lake-filling.

Mark Lane has been working in the garden for over 40 years, 30 of those as Head Gardener so the planting and design are very much a joint creation by him and the Queen herself, working to create a giant secret garden on what is, in essence, a triangular traffic island.  They have tried to plant as many different species as possible so you are also in what could be thought of as an arboretum - I saw no weeds whatsoever so it's probably fair to say that there is not a tight budgetary constraint.  Mark's bold claim is that "any habitat you can name we have an example of here."  I walked along the herbaceous border for 150 metres without seeing the same plant twice, apart from the six or seven banana plants.  This border runs along the edge of a lawn extensive enough for a helicopter to land.  Indeed one chopper touched down just before the coronation in 1953 making it London's oldest helipad, now reinforced with matting underneath the lawn.  Behind this is the lake with two islands, both rarely visited by Royals - or other humans - to encourage wildlife there.  Another semi-secret element is the woodland path behind the herbaceous border for the Queen to use on occasions "when she wants some peace and quiet".

Apart from creating a pleasure garden for the Royal family, the gardeners are focused on the three big garden parties the Queen holds in early summer each year (aside from Covid years).  Each one is for 7,500 guests, who are allowed to roam freely around the gardens.  Mark and his team are so concentrated on these events that his motto for each party day is, "not a leaf out of place".  They also prune the roses in late autumn rather than Spring so that they bloom and are at their best for the parties.  His main criteria for choosing the species of rose are that they should have maximum fragrance and be disease resistant.

"Every garden," insists Mark, "should have a conservation plan" and Buckingham Palace Gardens has one: they recycle 99% of their waste, they have bee hives on the island, they retain rotting Robinia trees for the bats, and they have much increased their areas of meadow grasses.  These grassy patches have been good for moths and butterflies and the gardeners can be sure of this because every year they choose several nights to set up overnight moth traps.  Using a mercury light, they trap, count and then release dozens of species and they have a record of this annual audit going back to 1956. 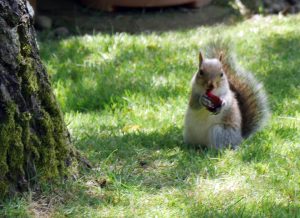 Other species are not so lucky - grey squirrels are "controlled" though Mark was too coy, even with the group of foresters I was accompanying, to say whether he shoots, traps or poisons these "tree rats"   It seems that being Royal doesn't stop your trees or garden from suffering from pests and diseases.  Honey fungus is a menace that they attack using fungicides and "air-spading",  whilst Oak Processionary Moth nests are removed for incineration, and even their London Plane trees are attacked by the Massaria fungus which has been present in London since 2007.

Buckingham Palace Gardens have a very long history and at one time had a four-acre mulberry garden to produce silk worms.  The King at the time (King James 1st) was so keen on silk production that he ordered every county in the country to plant 1,000 Mulberry Trees, some of which still survive such as the ones at Charlton House in South East London.   The variety and quality of trees mean that Buckingham Palace Gardens has 15 National Champion trees, three of which were planted by the Royal family.  One of the most unusual plants we stumbled across was the Ilex vomitaria, a species of holly which, when eaten, makes the consumer vomit.   But my favourite was the common hawthorn whose berries had been recently harvested - they are used to make Buckingham Palace Gin which for £30 a bottle is available commercially (who said the Queen doesn't share?!).

All the hundreds of varieties of trees and shrubs are part of Mark Lane's aspiration as Head Gardener which he describes as "to create a garden that is notable not just because it's attached to Buckingham Palace but which stands on its own merit."  He told us of an incident in the gardens, when the queen was meeting a man who was one of thousands of guests at one of the tea parties.  His phone went off and he looked a bit confused, not sure whether to take the call. She advised encouragingly, "yes, take it - it might be someone important." 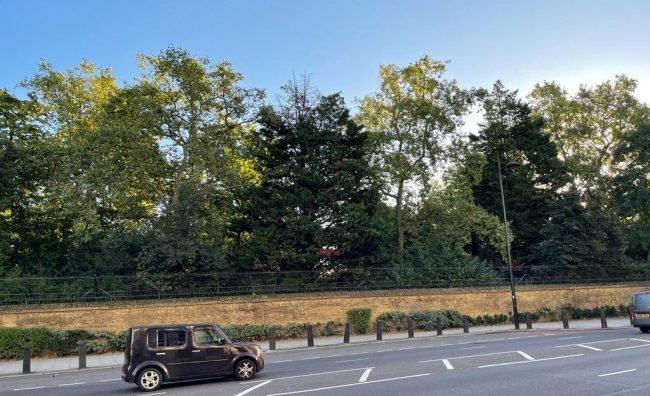 Although photos are not allowed it seems some have been smuggled out.  If you search "Buckingham Palace gardens" on Google images you'll find a nice collection of snaps.  My pictures are all from outside, trying to look in.

Have you visited?  What was your impression?