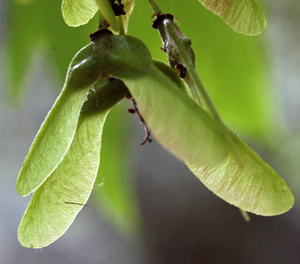 A single Ash tree (Fraxinus excelsior) can produce thousands of fruits (also  known as keys) in large clusters attached to the tips of its branches.  Each fruit is known as samara - in which a flattened wing develops from the ovary wall. The flattened wing is made of a fibrous, paper tissue.  The seed can be in the centre of the wing (as seen in the elm), or to one side (e.g. in the ash). Where the seed is on one side, with the wing extending on the other side, then the structure will autorotate as it falls, as is the case in the maples and ash trees. 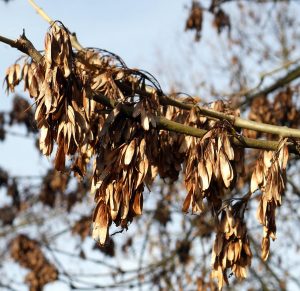 The sycamore produces a double samara, where two one seeded wings are joined together - to form a helicopter-like structure (sometimes known as spinning jennies).

The effectiveness of these winged seeds was investigated by researchers from Caltech and the University of Wageningen. They created plastic models of the seeds and measured their ‘spin’ and descent in tanks of oil.  Suspended in the oil were minute glass beads that enabled the scientists to ‘see’ and measure the movement of the oil (air) around the spinning ‘fruits’. They were able to show that the wings of the falling fruits generate more lift than would be expected by regarding the wings as aerofoil sections.  In fact, the leading edge of the rotating wings has a high angle of attack, so a stable vortex forms.  This vortex joins with the one at the tip creating a cone of low pressure above the wing. It is this region of low pressure that slows the descent of the winged fruit; allowing for the potential of greater dispersal.

The effectiveness of the sycamore double samara is testified by the establishment of the sycamore across much of the U.K.  The tree was probably introduced into the UK circa 1500 AD and has readily invaded disturbed habitats such as plantations, abandoned farmland, brownfield land, railway lines, roadsides verges and hedgerows. 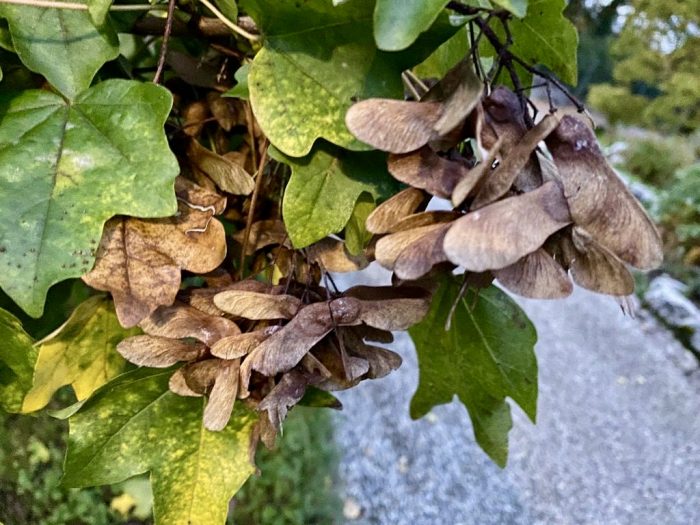 Double-winged fruit of Dipteronia, a genus of plants sister of the Acer / Maple genus. Includes two species found in south-eastern and central China