Trouble in the garden 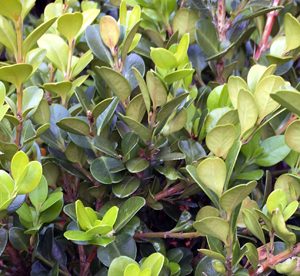 Topiary is often on display in our parks and gardens, and many of the stately homes managed by the National trust have exceptional displays.  One species that is a great favourite for topiary is Box (Buxus sempervirens).  Box has small green leaves and a dense growth habit; it is hardy and poisonous (contains an alkaloid - buxine, which causes respiratory paralysis).. It was once planted close to houses (according to folklore) to deter witches entering.  It was used extensively in formal gardens since Tudor times.   However, Box is now under threat from pathogens that result in Box Blight, and also the caterpillar of the Box tree Moth from Asia.

Box Blight is a fungal disease associated with two species Cylindrocladium buxicola and Pseudonectria buxi.  Both these fungi cause the leaves to go brown and fall.  C. buxicola is more damaging in that it infects young stems, which then develop black streaks and suffer dieback. 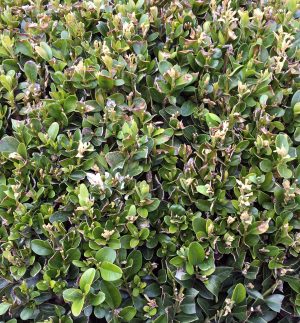 In recent times, box blight has been rampant (especially in years with high rainfall) - with outbreaks reported throughout Europe (including the United Kingdom), New Zealand and the United States.   In the U.K. it was first discovered at a Hampshire nursery, and was found at Box Hill, Surrey in 2000, where Box is native and extensive.  In November 2012, all the box hedging in the Alnwick  Poison Garden was removed as a result of blight.

Box is also being threatened by the voracious caterpillar of the moth Diaphania perspectalis .   The moth is native to Asia; it has semi-transparent whitish wings and probably arrived in Europe in 2005.  It has been found in the Netherlands and France,  Some five years later, it was seen in Surrey.  Since that time, the RHS has documented cases to the east of London, near Slough and it is thought to be be ‘well established’ in the South East.

The moth can go through two or three generations between May and September, each year.  The moth lays its eggs on the inner branches of the box and when the caterpillars hatch - they eat their way outwards and also create a sticky, white web. When they emerge, caterpillars are greenish-yellow, with black heads. Older caterpillars can reach up to 4cm in length; they have a greenish/yellow body with thick black and thin white stripes along the body.

What can be done?