You are here: Home > Blog > Practical Guides > An old tyre, an aid to log splitting?

An old tyre, an aid to log splitting? ~ by Angus 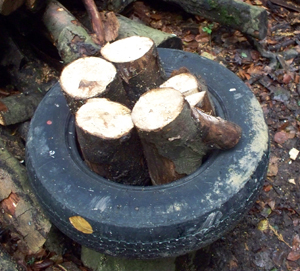 Albert Einstein said, "people love chopping wood: in this activity one immediately sees results". The problem with splitting wood is to get a pile of logs split speedily and with minimum effort and risk. Using an axe usually means the split pieces fly everywhere and it also leaves you spending most of your time lining up logs to split. This is inefficient and you spend a lot of your time bending down to pick up work you've done or to prepare work to do.

Sean Collins has demonstrated shown a better way. First he puts an old tyre on a chopping block. He then puts logs into the tyre ready to be cut, as in this picture - you don't need to wedge them in tightly so putting the logs in is quick and once it's set up you split away until a whole group of logs is split and in one stoop you can move them away into a neat stack. The beauty of this technique is that old tyres don't blunt your axe and are cheap and easy to acquire. In fact you might even get paid to take them - where they are flytipped it usually costs about £1 per tyre to have them removed. 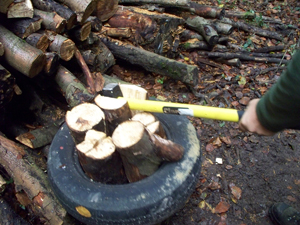 Old car tyres in the right place can be very useful for all sorts of other activities. In woodlands or by roads they can be used to build earth banks and hold them together and they can even be used with mud as an alternative building technique to create walls with enormous thermal mass. This is illustrated by Mike Reynolds in the film "Garbage Warrior" where he builds a series of eco houses, which he calls earthships, mostly using old tyres and discarded cans and bottles - http://en.wikipedia.org/wiki/Mike_Reynolds_(architect)

Splitting logs has been an important activity since time immemorial and one attraction of the activity was illustrated by Henry Ford who said, "Chop your own wood - it will warm you twice". Ironic then that the inventor of mass produced cars should have inadvertently also supplied us with an aid to log splitting.

[…] Albert Einstein said, “people love chopping wood: in this activity one immediately sees results”. The problem with splitting wood is to get a pile of logs split speedily and with minimum effort and risk.  […]

Use a high profile tyre together with the Logmatic Axe, and there is no going back.
You can even get a fancy Logmatic splitting basket.