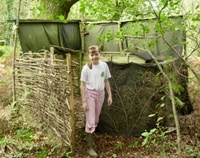 When we first had our wood, we didn’t worry about a toilet. “Go behind a tree” we told visitors. And the campers went off into the woods “prospecting” with a trusty spade. No problem.   But the years went by and we started to have visits from little girls, and older ladies, and we realised we were in trouble.    So we dug a hole. And over it we placed a large strong box, upside down, with a round hole in the top. And over the hole we fixed a toilet seat. On a post at the side, we hung a toilet roll. Simple, really.

The rhododendron bushes were pretty thick just there, but for added privacy we erected a screen of dark cloth from the market, supported by poles.   And since that day, I have been collecting ideas from other woodland owners on the best way to do it: to be hygienic, civilised, and environmentally friendly. The best advice I had was to buy from the Centre for Alternative Technology a wonderful book called “Sanitation without Water” by Uno Winblad and Wen Kilama.  Tens of millions of people, to this very day, are surviving and flourishing, day in, day out, without toilets as we know them. And although none of us woodland owners expects to be in this sort of situation, the book has some very useful tips.

“People need to choose the latrine that is best for their area and for their traditional culture.” Hence the toilet seat, which transforms the very primitive arrangement of just squatting instantly into something fairly acceptable. Though, as a ten-year-old said to me the other day, “That’s the weirdest toilet I ever saw”.

The book recommends sprinkling dry ashes over excrement to prevent flies from getting to it, and this also much reduces the odour. We collect the old ashes before lighting the new fire, keep them dry in a big pot with a water-tight lid, and sprinkle them with a soup ladle.   Apparently, the mixing of urine with faeces inhibits the rotting which will naturally render the bacteria harmless. So we now follow the advice of the book, and spread a layer of vegetable waste, or just leaves, in our toilet each time we visit.

Of course, the hole gets filled up, and when it is near the top, we cover it with a good layer of earth, and dig another hole. Moving our screen is fairly easy. Other people have told me they use a pail inside their box: one of those straight -sided containers used in wine making. Then they empty it in a hole far from the clearing where they picnic or camp. They actually have walls and a roof on their toilet; when it rains we just hold up an umbrella! 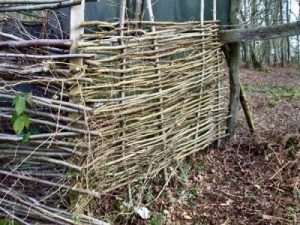 Getting closer to the natural scheme of things, another owner showed us her “compost toilet” with logs arranged in walls round the four sides of the hole, and a nice smooth round one to the front for sitting on. She assures us it is very comfortable. Her screen is simply poles, tepee style, clad in branches.   A friend who visits frequently is slowly replacing our dreadful curtains with fine traditional hurdles, made from our own hazel.   And for a lock, a simple branch on stilts across the track leading to the toilet will suffice - after all no toilet in our own culture is complete without a lock, however notional!

This blog was originally published in 2006, but is often searched for - so we have brought it forward.

Below is a link to another offering on the subject, from a woodland owner:

[…] Woodland toilets. When we first had our wood, we didn’t worry about a toilet. […]

I made a movable toilet from a large B&Q plastic flower pot turned upside down with the bottom cut out and an Argos plastic toilet seat bolted onto it. At about 60cm high, it’s just as comfortable as at home (if a little cooler on the bum). It was very cheap and easy to make.

I dig a hole in the ground about 50cm deep (shovel width and breadth) and place the toilet over that. When it starts to fill up with waste, I dig a new hole somewhere else and seal the old hole with the spoil from the new one. The waste decays quickly and it hardly ever smells. In summer, a shovel-full of ash keeps the flies away.

This is indefinitely sustainable, because the poo decays at a rate faster than we deposit it.

Next thing is to make a portable roof to go over it, with a screen for privacy. At the moment it’s tucked in between some holly bushes in a quiet corner of the wood. I’m thinking of using Onduline for the roof (£16.99 per sheet in Wickes; two sheets needed)

I recently bought 5 acres in Devon, and absolutely love it. Don’t regret a penny.

I have been digging a hole and placing a ‘thone’ above it: a large plastic plant pot, hole cut in the bottom and toilet seat mounted on it. At present it is shielded by a beach wind break, but I have plans for a tree-bog. What willow should I use?, there are so many of them.

My woodland came with a covenant that was VERY specific about what is permitted and what is not, and I don’t believe the 5 year rule would cut any ice if it was forbidden in the covenenant. I am permitted a ‘woodland store’ of a max size that must be a ‘temporary structure’ and not used as a dwelling. I have a tent for sl’eeping in through the summer, but it is fair to say once I have my woodland store’ (planned for easter), if it is absolutely tipping it down, I may be found huddled on the floor among my tools!

Good luck to you all in your projects.

What about water for hand-washing ?

I’m thinking of buying a plastic water butt (of the kind they sell in garden centres) and rigging a tarp to collect rainwater to fill it.

The intention is that this will be for washing (ourselves and our dishes) but not drinking. Does anybody have experience of using plastic barrels for this purpose ?

Does the water go manky after a while ? I have seen quite a few videos on YouTube (mainly American) about creating a rainwater filter using pea gravel and sand, to clean the water on its way through the barrel.

It’s in semi-rural Hampshire. The air quality is probably OK but there will be dead leaves, insects and bird droppings to contend with.

Hello, just looked at Craigs blog, looks great. What about planning Permission for the structures in the woods, or does`nt it count if no-one lives there (but presume they are)… what about the five year thing applying for a live in structure? Lots to learn..maybe someone could answer…thanks.

We’ve kept our woodland toilet in Wales very simple and it works well. It wouldn’t stand continuous use -we probably camp around 3 weeks per year all in. Its basically a hole in the ground. On top when not in use, we cover with an old metal bin lid which keeps animals /flies out. When we’re there, I adapted an old camping bucket style toilet, and cut the bottom out. I then screwed this onto an old cupboard door as a platform, with a suitable hole cut out. This just provides a seat over the hole.

Obviously keep well away from water courses / supply etc as with any toilet. We keep a bucket of ash by the toilet, and sprinkle a trowel full every visit. Ash adds carbon and improves composting, also neutralises urine. Generally, best to wee behind bushes wherever possible, as urine prevents composting.

A spade sized hole (approx 18 inches square, by around 2 feet deep) had fully composted in around 9 months and could be dug out and reused.