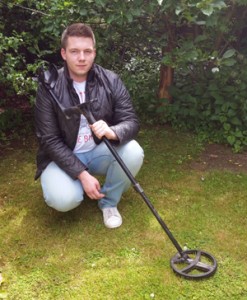 I have always been interested in history since a young age and over the years this interest has developed, until one day about 3 years ago, I got the urge to buy a metal detector. Since then, I have been exploring the fields of Wiltshire and Somerset. The reason that I enjoy it so much is that it is a great way to unwind and get some exercise; though the main reason for me is that whatever I dig, someone was stood right where I am now possibly thousands of years ago and I try and imagine what it would have looked like around me back then.

Where ever I want to ‘metal detect”, I have to get permission of the land owner to metal detect / investigate on their land. With this in mind, I approached woodlands.co.uk and they have kindly granted me permission to explore a wood in the Bath area. I have never detected in woods before - so this will be a new experience, which I look forward to and possibly a steep learning curve.

How my metal detector works and why I chose it!

The coil is mounted to a very clever ‘S’ shaped stem system, which is fully adjustable and can be fully collapsed for transportation. The remote control can then be fixed just above the handgrip. This whole setup is ridiculously light. It weighs in at only 992 grams (890 grams without the remote control)  meaning that I can metal detect for hours without any fatigue in my arm.

Another surprise for me was that the XP Deus has the ability of changing its frequency from between 4KHz to 18KHz in four graduated steps. 4KHz is ideal for deep ground penetration with reduced sensitivity to tiny fragments of metal, while the 18KHz setting is very sensitive to small objects. The 8KHz and 12KHz are good compromises for a reasonable balance of depth and sensitivity. These are well thought out frequency choices - making the machine very versatile, being able to adapt to any ground condition. Many other detectors available are set with one frequency.

What have I found before.

I have found items dating all the way back to Roman times (including coins and broaches), right down to modern day junk, which has been simply discarded. You would be amazed at the amount of modern rubbish I find (from the last 50 years) compared to all other finds going back thousands of years. It is a shame that this modern rubbish has been wantonly discarded.    Some of my key finds include a Medieval Pilgrim’s badge depicting St George slaying the dragon, a King Henry III penny, an Elizabeth I sixpence and a George III shilling.

What I expect to find

Well to start it off, I fully expect to find old shotgun cartridges. I imagine that this woodland has been used many times over the years for hunting, so finding cartridges is almost inevitable. From the research that I have done on the area, it seems that there was a roman farming settlement sitting on the edge of the woodland and there are many ancient track-ways going through the wood.  Monk's would have journeyed between two priories that are nearby.   So I am hoping to find (a) items from the Roman period to link in with the nearby settlement and (b) any evidence to suggest that the monks used these routes to go between the priory's. I also expect to find various items from the 18th century to the modern day.

Over the last few weeks I have been doing lots of research into the area that I am looking to explore. Some of the research includes looking at county records of the area and this has revealed the information about the roman settlement and the monks’ journeys to the priories. I have also been looking at maps from the 19th century, which show various tracks and paths through the wood.

Another tool that I have used is a function called LIDAR (Light Detection and Ranging), which creates a 3D image of the area. It has only in the last few years been used for archaeological research but it is a great tool to use as it can show features in the ground that can't be seen by the naked eye.

I look forward to spending the next few weeks searching the wood and at the end of my searches, I will write another blog and share with you all what I have found.

I am new to metal detecting but loved history since I was a kid. I am looking to find woodlands around the Wiltshire area to go metal detecting and hoping someone could help me out with finding an area I can get permission to metal detect. I have done quite a bit of research in metal detecting and have learnt how to plug properly and taking good care of the area that is digged, also clearing all rubbish that is founf by taking it home and recycling or throwing away.

Please contact me if someone has good news and can help me get a permission to metal detect so I can love this fantastic hobby for many, many years to come!

Hi there is there any woodland I could metal detect in Torquay Devon and around 50 mile radius.
I am starting a YouTube channel of hidden finds and bring the history out of them and share it with the people; and hopefully find a museum piece, which would be fantastic.

I have my ncmd card, as well very honest and Professional.
Thanks for taking your time in reading this

I know all metal detectors are down at the moment but if anyone would consider allowing a fulltime worker part time detectorist detect in any woodlands? I would be willing to buy a permit and already insured with references available. I live in Essex but willing to travel to as far as the Kent area as well and follow all rules. I provide a free litter picking service which I perform as I detect the area.

Kind regard’s and I really appreciate any help towards my efforts to add to the history books.

Hi. How could I get permission to metal detect in your woodlands around the Nottingham. Lincolnshire and South Yorkshire areas. I’ve been a member of the NCMD for 5 years and have council permissions to search on land around chesterfield and Sheffield. Can I get permission and some kind of map to verify allowed search areas. I carry public liability insurance for metal detecting and use the Flo and museum when I need to record my finds.

Hi Ned, its 4 & 1/2 years on from the above blog. How did your search of the woods go? And are you still detecting? I’am wanting to metal detect in woodland and would like to know the best detector for woodland use. I have come to metal detecting from reading M.R James stories whistle and I’ll come to you and A warning to the curious.

The woodland is the property of my friend and neighbour.

This may sound like a strange request, so let me introduce myself: My name is Keith Levitt and I live in Tywardreath, having moved to Cornwall around 25 years ago. I am 60 years old.

I have been engaged in the hobby of metal detecting for a number of years and find it a healthy, enjoyable pastime that allows me to meet many interesting people. I have a keen interest in History and the thrill of finding old coins, buttons, etc. is very exciting to me.

I contacted Dick White the local manager for Woodlands.co.uk and he suggested that I put up a request as a message reply to the blog article. I am posting this message to see if there are any woodland owners in the Cornwall area that would be prepared to let me detect their woodland. I am prepared to travel so anywhere is possible

I want you to understand that I always respect the property that I search and try to leave it in the same condition that I found it. Normally the targets are no deeper than 4 or 5 inches and I retrieve them such that the ground appears not to be disturbed. Any trash found will be removed and taken away by me. Also this would be solely for my use and I would not be bringing anyone else with me.

I am a full Member of The National Council for Metal Detecting and am covered by full Public Liability Insurance.

In addition, I would like to offer my services to you. Perhaps you or someone you know has lost a valuable ring, a cache or a farm tool. I would be willing to assist just for the thrill of the search.

If you have any questions please let me know. I would be happy to meet with you if further discussion is required.

Thank you for your time and consideration.
Kind regards

Ned,
I am lucky enough to have a colleague who has just retired and also likes archaeology and owns a metal detector or two. As a result I signed a form so he can metal detect on my 10 acres of ancient woodland for a year. He found lots of those gun cartridges but also a lead musket ball, a coil of lead and a couple of georgian buttons. I shall have a go at digging out the potential old saw pits after reading your article. I shall tell my friend and hope he comes back. I threw away lots of old bottle bases, and recycled them. I wish I had kept them to date as later I found map evidence that there may have been warreners cottages at the same spot where all the bottles were found.
Virginia, If you have an area of ancient woodland near you, why not put a sign up in the local shop or contact land woners. It costs £3 via land registry to get the owner details, and another £3 to get the associated map. Good luck!

Hi Ned. I was recently watching a lot of videos on metal detecting and was hooked. I decided to buy a detector and a pin pointer so that my grandson and I could go exploring. Little did I realise that in the UK it is virtually impossible to out at random on an afternoon’s walk in the country or the woods around where I live and find a few coins. Everything is controlled by the ‘fascist’ council. I then remembered that most of the videos I had watched were from the U.S where is seems there are less restrictions than here. I am pretty gutted about it all, and the joy of a hobby that never got birthed has gone. I have applied for a Crown Permit, but this hasn’t come through. It is virtually impossible to detect here where I live in Bracknell. All the detecting clubs are full. I feel there is no freedom whatsoever in this country. I didn’t intend to rob the nation of its treasures, but certainly feel like becoming a night crawler or whatever they are called. Regards, Virginia