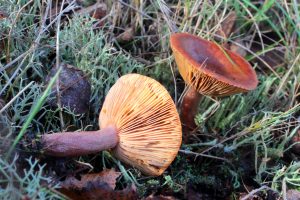 We’re not far from the shortest day of the year now and the concurrent midwinter festive frolics that signal the arrival of Christmas. For the mushroom hunter, however, this brief period of peace and goodwill to all men also brings the slightly melancholic awareness that we are past the peak of the fungi season and it’s going to be comparatively slim pickings over the next eight or nine months.   Nevertheless, my own mycological meanderings received a bit of a boost recently with the discovery of a new site here in East Kent, a public park established on the site of the former Betteshanger colliery  situated midway between Sandwich and Deal.    This pioneering exercise in environmental sustainability makes for a great day out throughout the year no matter wherever your particular interest in the great outdoors might lie. Its 121 hectares are interwoven with cycle tracks to race around while affording some spectacular views of the surrounding area. For nature lovers, the site provides a wonderful example of how interconnected the natural world is and the potential of remediating and improving environmentally-contaminated areas that otherwise have no real commercial value.

This large area of coal spoil was capped with clay and then a layer of topsoil applied before some areas were seeded with grass, others planted with trees. 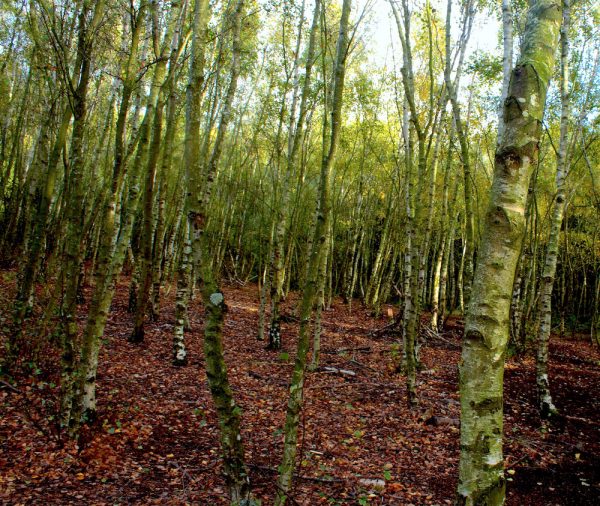 In the relatively short time span of the ten or so years since this reclamation project began, it has already developed an impressively diverse ecosystem, with a variety of habitats that include marshlands, grasslands and woodlands.   The latter habitat consists primarily of silver birch trees, chosen because they are a fast growing and hardy pioneer species that can thrive on poor soils. What is interesting from an ecological (not to mention mycological) perspective is that presumably all of the fungi that can be found at Betteshanger would have arrived on the root systems of the young saplings brought into the site from which the woodlands were established.

In a previous blog post from November 2017, I introduced the subject of mycorrhizal fungi. These are species that form symbiotic relationships with trees and other plants, with the fungi effectively extending its host’s root system to bring them nutrients from deeper in the soil than they might otherwise reach themselves, while in return the plant provides them with sugars and other carbohydrates that the fungi can’t generate on their own (as without chlorophyll they are unable to photosynthesise).  Fungi and fungal mycelium networks are thus a vital component of any ecosystem. With regards to woodlands, different species of fungi tend to form different relationships with different species of trees. In an environment predominantly comprised of birch, it comes as no surprise to discover a plethora of fungi that associate with birch trees.

Sure enough, it didn’t take long before stumbling upon my first finds, a striking carpet of that poster-boy mycorrhizal mushroom I discussed last year, the Fly Agaric (Amanita muscaria). 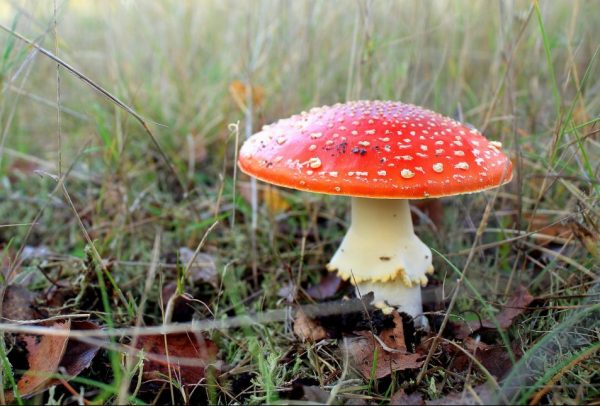 I mention it again in this post partly because the sheer volume of them at Betteshanger more than adequately proves my point about mycorrhizal associations, but also as an excuse to flash up some more photos of this never less than striking mushroom, as I have a lot on my hard drive and they seem the most seasonally fitting in this last post before Christmas. 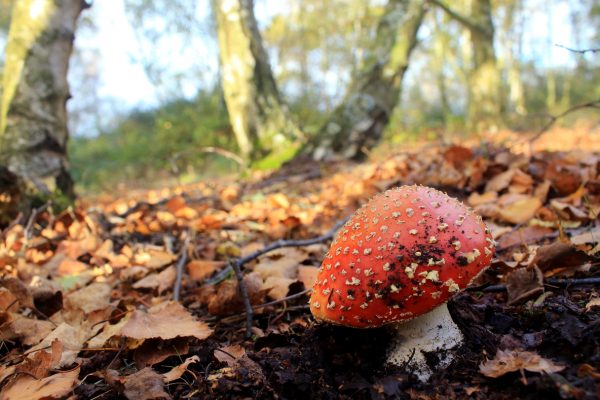 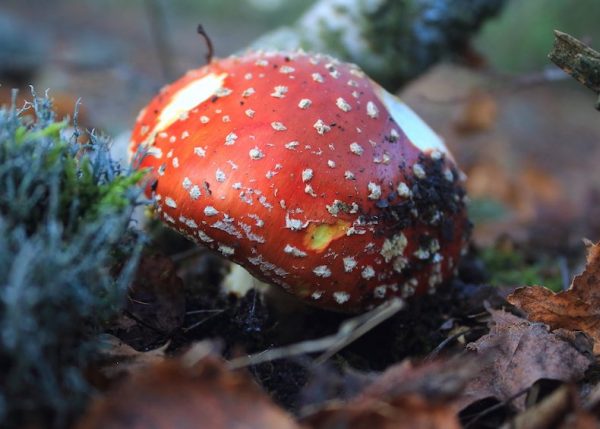 However, my choice of Monthly Mushroom for December 2018 is another find from Betteshanger. The Curry Milkcap (Lactarius camphoratus) is of a completely different ilk, even though it too can be found growing in the vicinity of birch or other broadleaf trees, and also within coniferous woodlands. 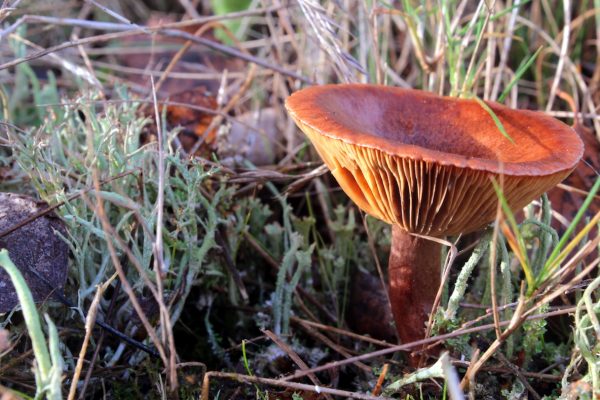 The particular specimens photographed here were spotted amongst the grass and positively flourishing lichen clumps at the edge of a cycle track, about ten feet away from the young birch plantation on whose roots they had obviously piggybacked. 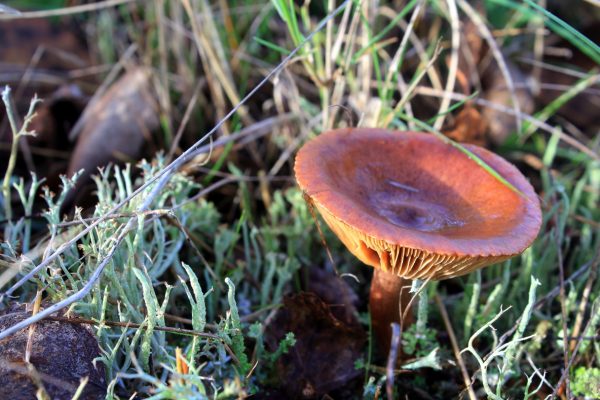 From a cyclist’s perspective, they initially seemed fairly drab and nondescript, and easily dismissed as yet another of your typical LBMs (Little Brown Mushrooms). Getting down for a worm’s eye view with the camera, however, revealed that close up their charms were manifold.  The funnel-shaped cap, around 4-8cm across, was a warm russet-brown colour. The stem, just under a centimetre in circumference and around the same length as the cap was wide, was a deeper brown tending towards purple at its base. The stem had no ring, and the tawny, slightly pink-tinged gills, were closely packed and shortly decurrent, so that they met the stem and extended down it, but only slightly.

So how does one identify a mushroom such as this? Well, for a start, we have already established it is ectomycorrhizal, but the clues to further identification lie in the name. The Lactarius genus, or Milkcaps (or Milk Caps), are so named because if you rip, cut or bruise their gills, they exude a milky liquid often described as like ‘latex’, although it should be mentioned that following long periods of dry or cold weather, this liquid may not always be present. In other words, if it doesn’t ooze milk (as in my particular case, hence the lack of photographic evidence here!), it could still be a Milkcap. 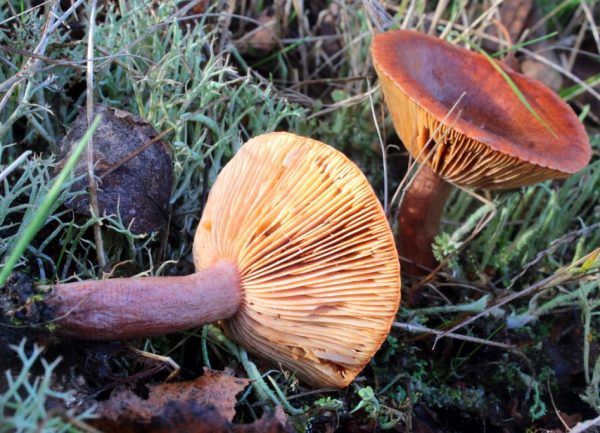 But assuming you have narrowed it down this far, one also has to remember that Milkcaps come in a variety of colours, shapes and sizes. This is a genus of around 450 species, so you will need to go by other macro features (i.e. those that you don't need a microscope to see) to pinpoint more exactly what your exact find is within the relevant Lactarius section of Roger Philips’ Mushrooms and Other Fungi of Great Britain & Europe, or the Milkcaps and Brittlegills gallery compiled by Pat O’Reilly on the First Nature website. (Actually even these two fairly exhaustive guides only list a sample of the full range of species).

As an example, close to where I found the Curry Milkcap, there were some similarly funnel-shaped small beige-tinged white mushrooms. The size and the crowded, yellowy decurrent gills gave some clues as to what it might be, but the cap’s inrolled margin and, more importantly, the slightly woolly texture, led further to the conclusion that these were most certainly Bearded Milkcap, or Lactarius pubescens (further evidence was provided at home by its light salmon-pink spore print). 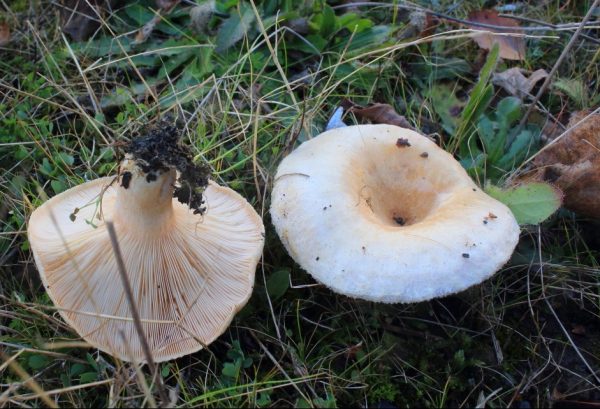 Going by colour alone as an indicator, my Curry Milkcap might also feasibly have been a Rufous Milkcap (Lactarius rufus) or even a Liver Milkcap (Lactarius hepatica), although both tend to be larger. Cutting it in half however revealed that its flesh was a rusty brown colour, while these other two have white flesh.

However, there is another identifying feature some fungi possess that is often overlooked, but of which last month’s post on the Common Stinkhorn provides a particularly pungent example, and that is odour. For the Curry Milkcap is not so called for its colour, but due to its aroma, and hence it is also referred to more specifically in some sources as Curry-scented Milkcap (although in North America it is commonly known as the Candy Cap).

The curry scent is not of the Madras mix variety, nor even that of the Curry Tree (Murraya koenigii), or ‘Sweet Neem’, whose leaves are a familiar feature of South Indian cuisine. It is closer the camphoric smell of the Curry Plant (Helichrysum italicum), the bushy silver-leafed shrub that has made its way from the Mediterranean into many a British herbal garden – hence the word ‘camphoratus’ has been part of its Latin binomial name since the late 18th century. Incidentally, another Lactarius that is readily identifiable from its small is Lactarius glyciosmus, or the Coconut-scented Milkcap.

I should point out, these posts are primarily interested in focussing on various fungi for their photographic and biological interest, not their edibility. Certainly this point should be emphasised for a site like Betteshanger: the fruiting bodies of fungi – the reproductive parts, the mushrooms, that form the visible part of an organism predominantly consisting of an extended root system of mycelium hidden underground or within rotten or living wood or whatever other the favoured substrate or that particular species might be – are known to be accumulators of heavy metals and other environmental toxins. You wouldn’t attempt to grow commercial crops on reclaimed coal slag, so you certainly shouldn't so much as consider eating a mushroom off one.

Personally I’d avoid putting any of the Milkcaps anywhere near my mouth, especially ones growing on slagheaps. Quite a few are known as poisonous (including the Bearded Milkcap mentioned above), although some hardcore mycologists do advise nibbling mushroom caps as yet another way of confirming their identity, providing you only take a tiny bit and don’t swallow, through their varying degrees of pepperiness or bitterness.  That said, Pat O’Reilly does mention that “In Germany and some European countries dried Curry Milkcaps are crushed and used as a condiment to flavour soups and sauces.”  Although only if you like your soups and sauces tasting and smelling of mothballs, perhaps….