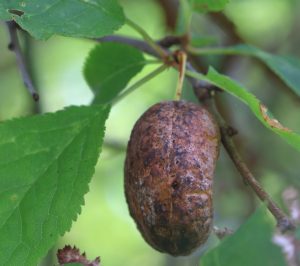 In a month characterised by fruits and flowers, we turn our focus to a fairly commonplace fungi whose own fruitbodies are invisible throughout its life cycle. In fact, you never truly see the fungi itself, just the dramatic effect is has on the fruits of its host.

Taphrina pruni is more commonly known as the Pocket Plum, or rather, the symptoms of this fungi are called the Pocket Plum. It is a biotrophic fungi, like the rusts mentioned last month, meaning it uses living plants as a source of nutrients, and while it won’t kill its host, its effects are hardly benevolent. This particular species is found on Common Plum (Prunus domestic) and Blackthorn (Prunus spinosa) and will be showing its face around this time of year by way of the unnaturally elongated and distorted plums, damsons and sloes that are produced on the infected trees. 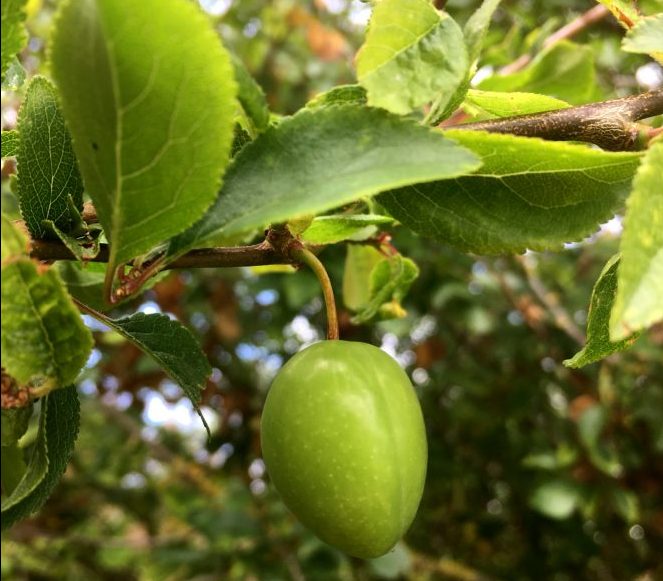 The fungus grows within the fruit – or rather ‘drupes’ when specifically referring to fleshy fruits such as plums, cherries and peaches with a skin and a hard stone inside that contains the seed – emitting chemicals that cause it to elongate on one side, resulting in a peculiar warping that gives them a bean-like shape. The affected drupes are become inedible and stoneless galls – hence such vernacular names as starved plum, bladder plum or mock plum they’ve been given over the years.

Taphrina pruni belong to that broad and varied category of fungi known as ascomycetes, which form their spores inside miniscule sacs – I’ve discussed previous examples such as Hymenoscyphus fraxineus, responsible for Ash Dieback; Green Elfcups, and Holly Speckle. It is the sac-like asci that distinguish the ascomycetes from the basidiomycetes, which produced their spores externally on microscopic structures known as basidia. Our more familiar cap and gill fungi fit into this latter category, but so do other less obvious examples such as the jellies, and perhaps surprisingly the rust fungi, which one might assume had a closer kinship to something like the species responsible for the Pocket Plum. 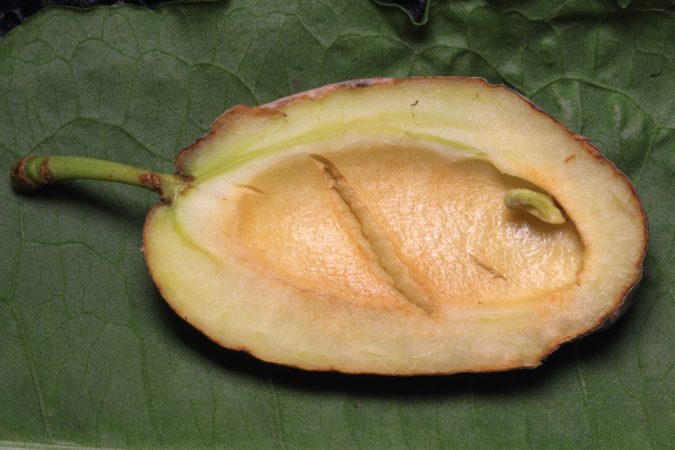 While the fruits/drupes/galls are growing, one can’t really detect the presence of the Taphrina pruni itself, as its mycelium and layer of asci forms within the living tissue of its skin. Upon maturity, however, the spores released from the asci will form a white bloom on the surface as the fruit turns withers to brown, then black, and either remains shrivelled on the tree or drops to the ground. The spores then make their way onto the bark of the host trees where they overwinter, apparently growing as yeasts – that is, budding single-celled colonies rather than the interconnected branching networks of mycelium from which the asci are formed. These yeasts then make it onto the buds and blossoms the following springtime where the more visible and destructive second phase of the life cycle takes place. 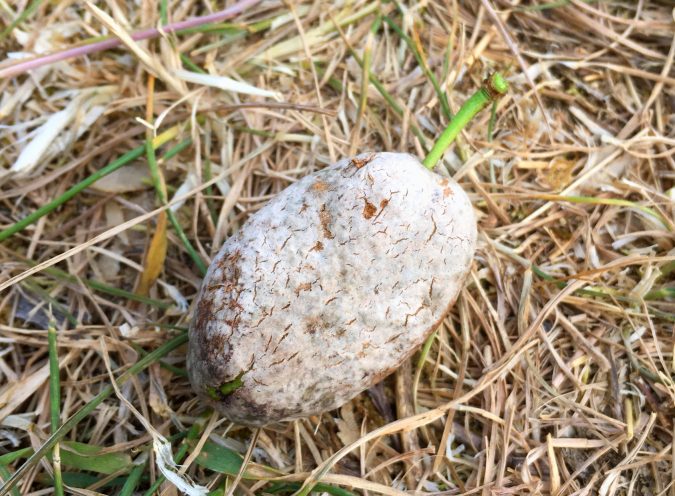 The life cycle of the Pocket Plum fungus doesn’t seem to be that well understood or well-documented, and while some sources say it is uncommon, this is undoubtedly due to it being underreported – at least by nature recorders as opposed to those with plum trees in their gardens perplexed at the loss of an annual harvest, and certainly unlikely to pass by unnoticed by commercial growers. Personally I’ve witnessed the symptoms on enough occasions to suggest it must be fairly widespread.

Certainly for those wishing to get rid of it, at least temporarily (it’s rather difficult to control the movements of airborne spores!), a more holistic approach than chemical control would seem the way to go. Rather like the Rhytisma acerinum fungus responsible for the late-summer Tar Spots on sycamore leaves, controlling Taphrina pruni is mainly a matter of disrupting its lifecycle. Remove all the infected fruits from the branches and around the base of the tree, sweep up and burn all dead leaves, and you’ll be limiting the number of spores likely to infect it the following spring. 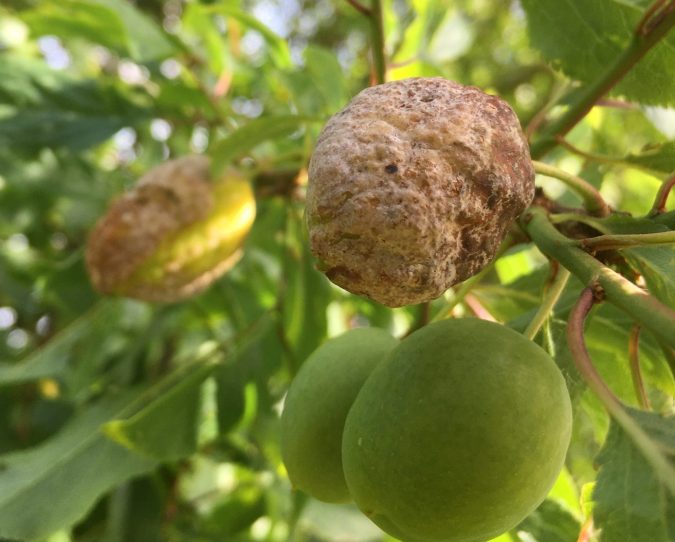 There are a wide range of other species in the order of Taphrinales that, to quote Laessoe and Peterson’s invaluable Fungi of Temperate Europe (2019), “are all biotrophic plant parasites that never form proper fruitbodies, but mostly produce a layer of asci within the host tissue”. Similar to Taphrina pruni is Taphrina padi, which has the same fruit-distorting effect on bird cherries (Prunus padus). Taphrina deformans is responsible for peach leaf curl that causes the leaves of peach, nectarine and a number of other trees in the Prunus genus to pucker and become a discoloured orange-red. Taphrina alni gives rise to the bizarre protruding outgrowths from the catkins of alder trees known as Alder Tongue. The most conspicuous however are the witch’s brooms, large nest-like clumps of twigs and leaves, formed by a number of species, but most commonly associated with Taphrina betula, that effects the crowns of birch trees. 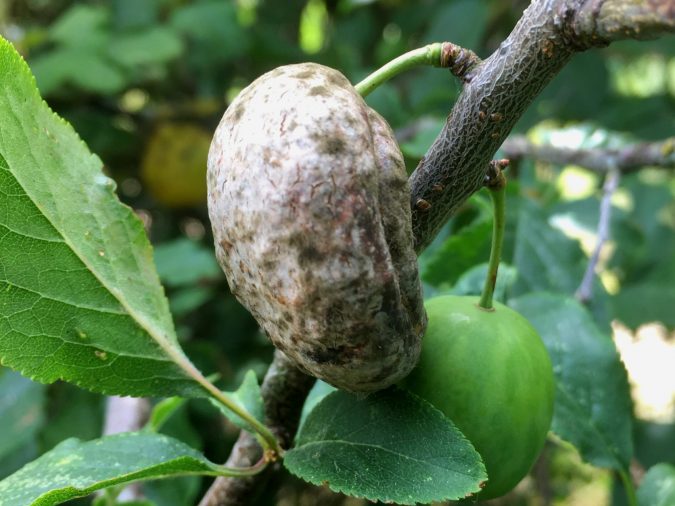 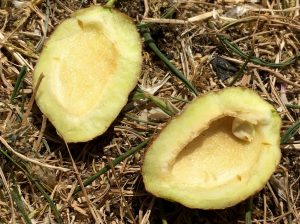 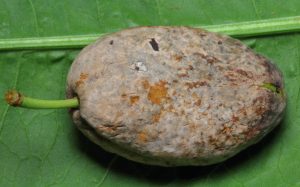 I was so excited seeing a vast smothering of blossom on my plum tree, expecting a similar wealth of harvest to come, so it was devastating to see the weird banana-shaped fruits appear. Thanks for this article; there’s not a lot about this, even in gardening books, other than the fact that it’s a bad thing! The fungus also encourages a lot of twiggy growth, another sign a tree is infected.

Thanks for the kind words. What I’m hoping to show is that you can find fungi all around the year, not just the Autumn season.

I have to confess, I’ve not been out hunting recently, so not found any Chicken of the Woods this year, but from reports it seems to be popping up as much as it did last year.

Very interesting you diarising these events, have you seen any ‘chicken in the woods’ yet?

Just a note to thank you so much for posting these interesting and accessible nature articles.