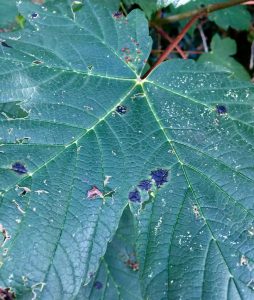 It is that time of year, when many of our plants are looking a bit past their prime. The flowers on many have turned to seed heads, much of the new growth of Spring is now yellowed or dried, and the assorted flora of meadow, woodland and garden alike are succumbing to fungal pathogens such as powdery mildew.

Another dramatic manifestation of the changing seasons around this time is the appearance of Tar Spots; peppering the leaves of sycamores and maples. Caused by the fungus Rhytisma acerinum, these brown-black blotches with yellow borders will be equally familiar to urban-dwellers, as they are commonly to be seen on that most ubiquitous of city trees, the London plane (Platanus acerifolia).

The logical assumption when spotting these dark patches is that the tree is diseased. However, though classified as plant pathogens, none of the 18 species in the Rhytisma genus – each associated with its own type of tree, 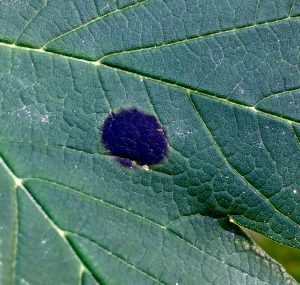 so that R. salicinum appears on willows, for example, while R. ulmi is to be found on elms in North America – cause any long term damage to their host.

The Rhytisma are part of the Ascomycetes phylum of the fungi kingdom, so-called because they form their spores within tiny sacs (or ‘ascus’), as opposed to on the minute stalks (or ‘basidia’) of the other main phylum, the Basidiomycetes, to which the more obviously mushroom-like gilled species (and much more besides) belong.

The Ascomycetes division encompasses a wide spectrum, from edibles like truffles (Tuber sp.) and morels (Morchella sp.) through decidedly in-edibles such as the hard black Cramp Balls (Daldinia concentrica)  [image below right] 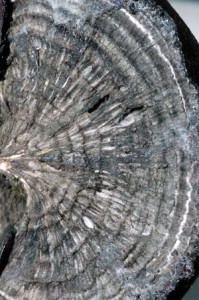 and Dead Man’s Fingers (Xylaria polymorpha), all the way to invisibles such as brewer’s yeast (Saccharomyces sp.) and the various species in the Epidermophyton genus responsible for athlete’s foot, ringworm and various other skin ailments.

Another Ascomycetes fungi group, the Taphrinales, are responsible for the abnormal malformations, swellings and growths of branches and leaves that give rise to the phenomenon known as Witches’ Broom, the dense, birds-nest-like twiggy growths commonly seen on a variety of trees.

The Rhytisma, however, are only to be found on the leaves of their hosts, not the woody parts. The spores, released from the fungus remaining on the fallen debris at the base of the trees, attach themselves to the new foliage that appears in Spring. As the new leaves grow, so too does the fungi’s 'root system' of hyphae grow within it, which manifests itself in yellow-brown discolourations that spread out in localised circles. 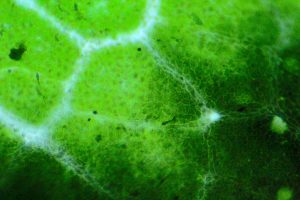 These eventually turn into the characteristic black tar spots, ranging 1-4cm in diameter, that contain  fruiting bodies of Rhytisma - in which new spores develop to continue the cycle afresh year after year. Shortly after these marks reach their peak,  Autumn arrives and the leaves fall to the ground.

While certain fungicides can be used to limit the appearance of tar spots, the best method is to clear away and burn any leaf litter surrounding the tree during winter.  Even then, it is a matter of taste as to whether it is really worth the bother. While Rhytisma’s relationship with its host might be described as parasitic, it relies on the tree’s survival for its own, and therefore causes it no real harm.   Much better to celebrate these superficial blemishes as an indicator of the changing seasons which, like freckles on a friend’s face, bring their own natural beauty to the woodland environment.

[…] Fungus (Armillariam sp.) is a good example of a parasitic type, while the relationship between Tar Spots and the leaves of the sycamores and acers that they appear on is best described as […]