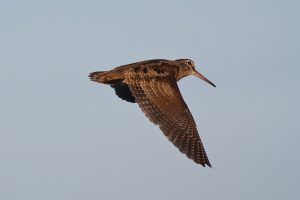 We made our way along a narrow track, through young birch and old chestnut coppice. It had been recently cut to mark the boundary between our wood and the next. Down a muddy bank and into thick bramble that marks the beginning of the stands of old pine. There was plenty of water flowing in the stream in February. It came up out of the bramble, a partridge like bird with a flash of russet brown. What was clear was the immensely long beak. It had to be a woodcock. It was a bird that was new to me. I checked it out at home. Yes, the perfect conditions for this shy bird.

A week or so later in the same spot, we flushed it again – a much clearer view this time. No alarm call. It was the beak that stood out as we saw it fly low into the next stand of trees. We will avoid this part of the track in future so as not to disturb it.

Most of the woodcocks seen in UK during the winter are from Scandinavia and Russia. They need our mild climate to enable them to probe that long bill deep into soft ground searching for worms and beetles. In April they return North to breed. A small population remains here. Were we to be lucky to have a breeding pair in our wood? 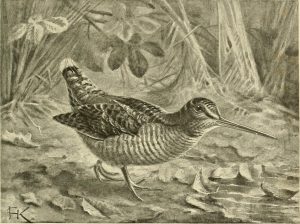 During April and May the male woodcock displays by flying low over the tree line of its territory at dusk. It is during these “roding flights” that you are most likely to see it. We camp out on a rise in the wood with a perfect view of the tree line – nothing, and no more views of our bird that summer. We felt privileged at least to have had it in our wood for a time. It gave us the perfect reason to change the name of Rig Wood, not such a special name, to Woodcock Wood. We had to wait until the next winter before seeing another.

Woodcock Wood is 9.5 acres of coppiced chestnut, semi-mature oak and Corsican pine. It is part of a stand of 60 acres near Biddenden in Kent. We completed purchase of the wood in May 2017. 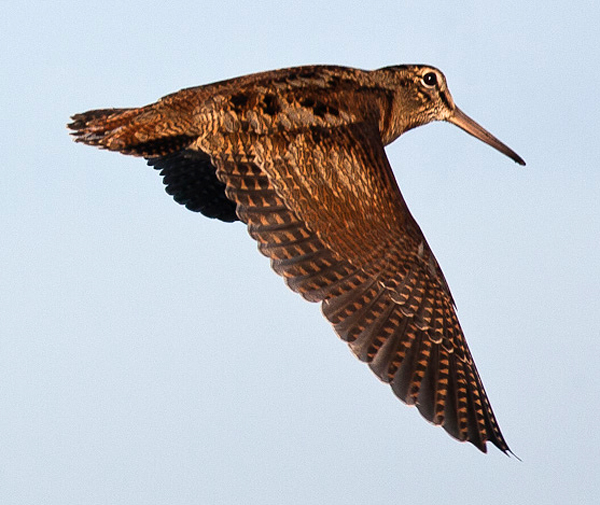 We saw a couple last year flew up from cover in our woodland… then we saw one neatly plucked on a stump ready for a hawk feast by the looks of it.

Sad to say none since last year. Either eaten,scared off or local idiots shot them.

Amazing how quick they fly as they dont look very aerodynamic.

We are lucky enough to have seen Woodcock in our wood on more than one occasion. We were nearly on top of the bird before it flew. Very lucky to see them.