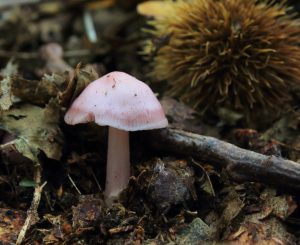 For well over half of the year, I rather struggle to come up with a suitable subject for these monthly mushroom blog posts. As we now, however, find ourselves at the peak of the season, the explosion of suitably fetching candidates that have appeared over the past 4-6 weeks alone has left me wondering where to place my focus this time.   The past October seems to have presented a particular abundance, even by usual standards for the time of year, if the various specialist fungi spotting and forager forums and social media sites have been anything to go by, with many seasonal species popping up simultaneously across the country. “It is always around the 15th October that, seemingly out of nowhere, the honey fungus suddenly appears in the woods.”, the BBC Woman’s Hour website claims and sure enough, it was on this exact date but a few weeks back that I popped down to my local park and found the specimens snapped for this recent Woodlands  posting.

In Kent, at least, we seem to be having a bumper crop of the fairly rare and unfeasibly pretty Wrinkled Peach (Rhodotus palmatus) at the moment, but since I already covered this one about a year ago I’ve decided to turn my attention this time to a couple of species of a similar hue. 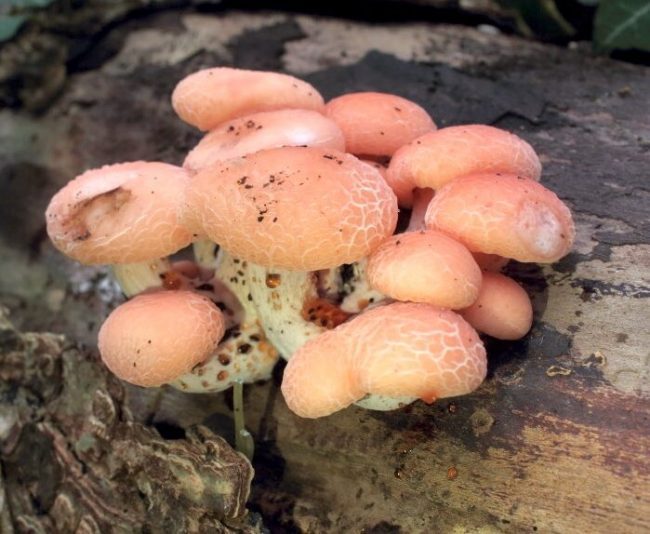 There are a number of mushrooms in the pinkish-purplish range. At the bluer range end of the spectrum we have the Amethyst Deceiver (Laccaria amethystina) and the Violet Webcap (Cortinarius violaceus). The former has a cap diameter ranging from 2-7cm, a relatively long and thin stem that grows to about a centimetre wide and 10cm tall, and it yields a white spore print. The latter less common type has a cap ranging from 6-12cm in diameter, a shorter and thicker stem that bulges towards its base and gives a rusty brick red spore print – in fact, while both have purple gills, the Violet Webcap’s ones become tinged with this spore colour as they age. 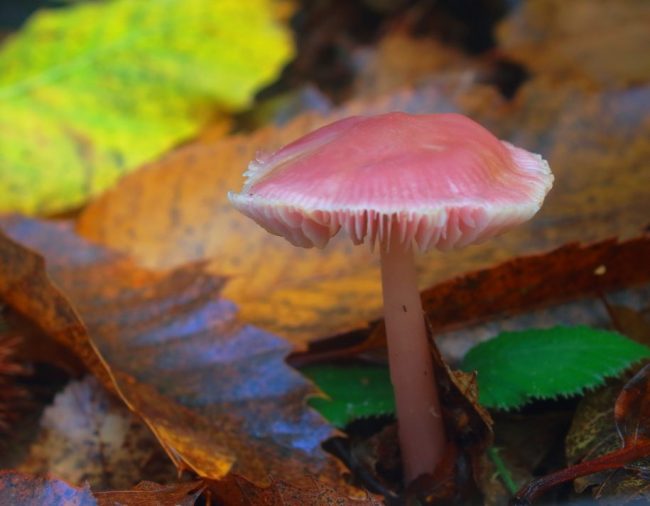 Then there are our three common blewits, the Field Blewit (Lepista saeva), the Wood Blewit (Lepista nuda) and the Sordid Blewit (Lepista sordida; a.k.a. Lilac Blewit) - see image below; all of whose slippery-when-wet, dirty grey to beige mushroom brown caps come tinged to varying degrees with a pinkish or violet colour that creeps down to the lower parts of their fibrous stems, where it is appears particularly visible. 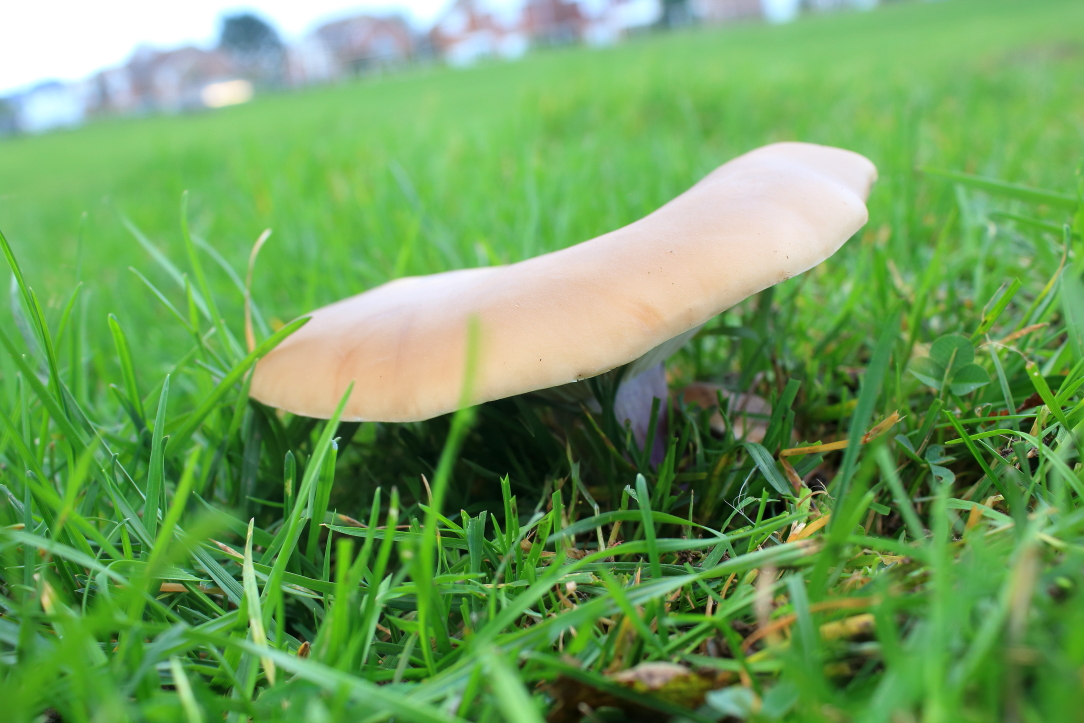 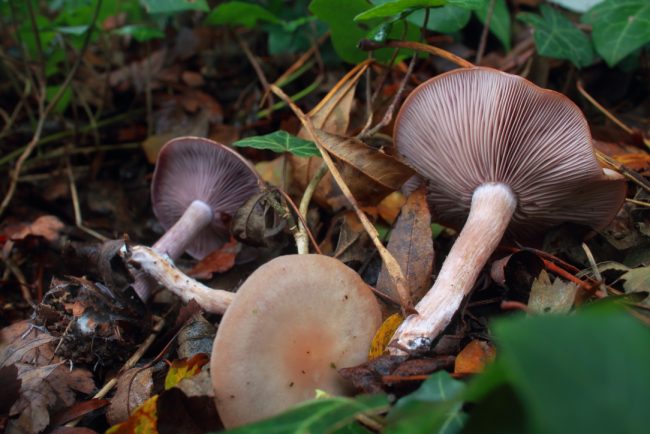 However, this month’s fungi focus is on two commonly found standout types amongst the Autumnal forest floor. Both are saprotrophic, feeding on already decaying organic matter and therefore found on leaf litter and humus in broadleaf woodlands, and both pop up from July to December.

They are among the more distinctive within the large and frustratingly difficult to identify Mycena genus, the Bonnet mushrooms, set aside by their colour and their relatively large size. The only problem is that the Rosy Bonnet (Mycena rosea) and Lilac Bonnet (Mycena pura) look more or less indistinguishable to casual eyes – so much so that there are some out there who treat them as the same species. 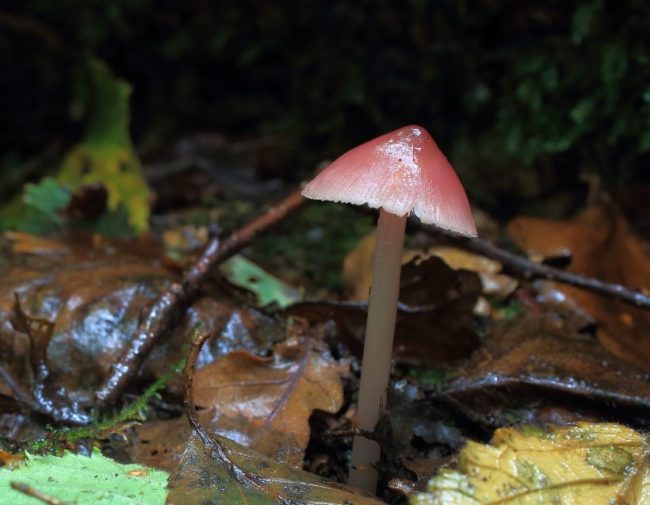 So let’s begin with the similarities. To quote Michael Kuo of https://www.mushroomexpert.com/mycenoid.html, “The tell-tale characteristics of this group include a white spore print, a small conical or bell-shaped cap, and a thin stem that is not tough or wiry. A few species, like Mycena leaiana, are brightly colored, but many are gray, brown, or whitish.”

Our two pink examples are bigger than the average bonnet. Michael Jordan’s The Encyclopedia of Fungi of Britain and Europe describe both as having caps ranging from 2-5cm across and a stem 5-10cm tall, with a diameter of 0.4-0.8cm for Mycena pura and an essentially identical 0.4-1cm for Mycena rosea. Size is not much of a giveaway for identification then, and even at the spore level there is a good degree of overlap: According to the First Nature website, Rosy Bonnet spores are described as “ellipsoidal, smooth, 7-9 x 4-5.5μm”, while Lilac Bonnet are “ellipsoidal to subcylindrical, smooth, 6-9 x 3-4μm.” 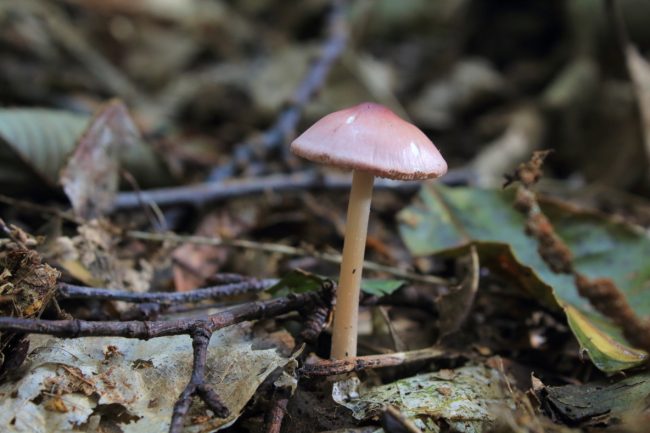 If the distinction seems subtle, then one should note the situation becomes even more problematic in that there is some degree of variation within these parameters. The Latin binomial for our Mycena pura, actually describes what is known as a “species complex”, defined by Wikipedia as “a group of closely related organisms that are very similar in appearance to the point that the boundaries between them are often unclear”. We should also note that there is a form of the Lilac Bonnet, Mycena pura f. alba, which is neither lilac nor pink – it is white!

Confused? Well, I certainly was until the umpteenth discussion on the difference between the two came up on the British Mycological Society Facebook group this year, and then suddenly it dawned on me I had probably never actually found Mycena pura and that all my discoveries were almost certainly Mycena rosea, the Rosy Bonnet. 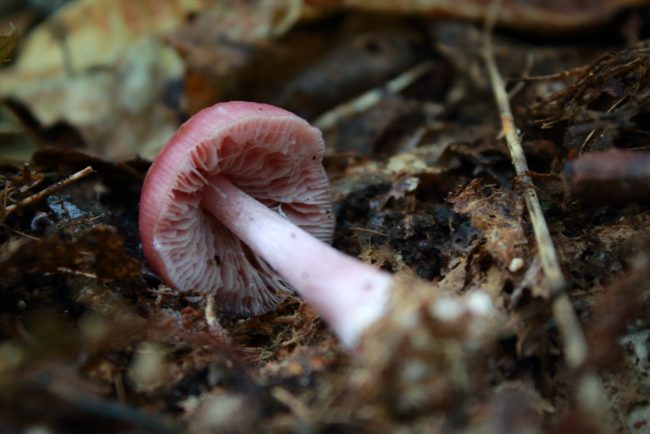 There are a number of points of difference that make distinguishing between the two not quite such a daunting prospect, and to this end, I cannot go any further without recommending the stunning new 2-volume Fungi of Temperate Europe publication that came out in October. Compiled by Thomas Læssøe. and Jens H.Petersen and featuring over 7000 species (including a rusts, slime moulds and even lichens) spread across over 1700 pages, it has basically revolutionised my life as an amateur mushroom spotter. Though at £95.00 it can hardly be considered a casual purchase (although can be picked up for much less than that if you shop around), it is exceedingly good value for money when you consider what you get. For me, the main strength is the clear way in which it is laid out and its innovative “wheel system” to help zero-ing in on identifications through the most readily observable features of your finds. I don’t mean for this to sound too much like a sales pitch, but seriously, if you have any interest in this subject, this two-book set is a must-have and I’ll be citing from it regularly in these posts from now on. 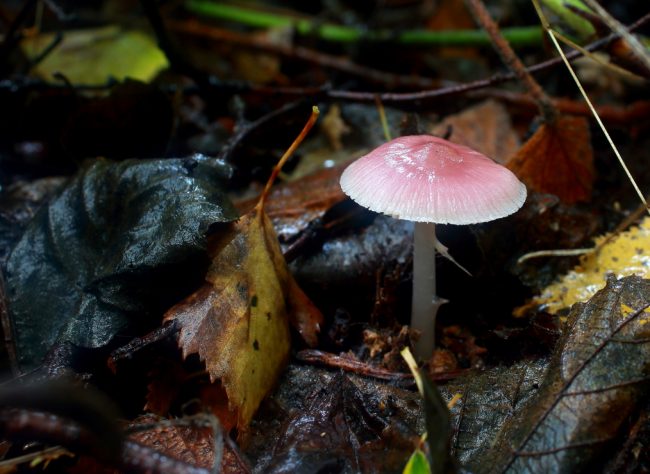 The main difference if you lay your two pink bonnets side by side is that the Lilac Bonnet really does have a more observable blueish tint (well, except for the white ones!) than the sort rose or watermelon tone of the Rosy Bonnet, which has not so much as a hint of purple of lilac. The rosy bonnet is also a little larger and chunkier, and according to the Fungi of Temperate Europe, its cap more “umbonate” – that is, it has a more marked rounded protuberance in the middle, like a pig’s nipple. The stem of the Lilac Bonnet is more or less the same colour as the cap, whereas the Rosy Bonnet’s is slightly paler, and also described as – and this is the real giveaway – “clavate”, meaning club-shaped. Basically it is thicker at the base than at the top, whereas the stem of the Lilac Bonnet has a consistent width throughout. 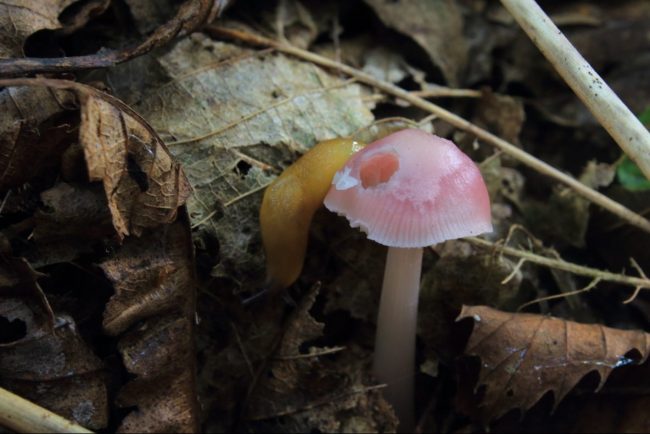 I am not going to muddy the waters any further here by mentioning that there are a number of other pink-tinged bonnets, like Mycena diosma, and I will also concede that for your average nature appreciator there is really no need to be able to be able tell the difference between Lilac and Rosy Bonnets. You shouldn’t even think of consuming either, the pink colour signalling the presence of same toxic compound, muscarine, found in the Fly Agaric (Amanita muscaria) and a number of even more deadly types …….