It is hard not to notice when you get close to a stinkhorn. You are most likely to catch a whiff of one long before you see it. If you find yourself lured to the source of this eye-watering odour, you will encounter a fungal form that is difficult to put out of one’s mind. These two equally offensive aspects combine to make it one of the most commonly found and identified fungi in the United Kingdom.

It shouldn’t be necessary to provide an exact English translation for the Common Stinkhorn’s  Latin name of Phallus impudicus, nor the derivation of the name Phallaceae that encapsulates the entire stinkhorn family. Those with a working knowledge of French will note its defining characteristics are contained in both its direct translation from the scientific binomial name, as ‘le phallus impudique’, and its more common sobriquet ‘le satyre puant’ (‘stinking satyr’). In Japan, it is the suppon-take (pronounced ‘soup-on takkay’) or ‘snapping-turtle mushroom’, referring to the soft-shelled fresh-water amphibian whose bobbing elongated neck has its own aphrodisiac associations in Asia.

The English herbalist John Parkinson (1567–1650) labelled it the ‘Hollanders workingtoole’ in his Theatrum botanicum of 1640, in a slight to our neighbours across the North Sea describing it “at the first rising up of it, is somewhat round, but the skinne breaking, there riseth up a stalke of the thickeness of ones thumbe, and of a fingers length, somewhat like a dogges pricke, having a nut or cappe on the toppe an inch thicke, of a blackish greene colour at the first, and after blacker, with certaine celles or hollow places in it.”

Nicholas P. Money, who devotes the first six sniggering pages of his Mr Bloomfield’s Orchard: The Mysterious World of Mushrooms, Molds, and Mycologists (2002) **(image below log)  to the species, reports that “In his seventeenth-century herbal, John Gerard pictured them in a modest, tip-down orientation, with the following description: ‘Fungus virilis penis arecti forma, which wee English [call] Pricke Mushrum, taken from his forme’.” He then goes on to elaborate how in the more prudish times of the Victorian era, that “as a mature woman, Charles Darwin’s daughter Etty so despised stinkhorns that she mounted an antifungal jihad with the aid of gloves and a pointed stick. She burned the collections in secret, thereby protecting the purity of thought among her female servants.”

H.C.I. Gwynne-Vaughan and B. Barnes in The Structure & Development of the Fungi (1930) prudishly refer to an alternate English common name of “dead men’s fingers” as if to evade the more obvious visual analogy, thereby causing potential confusion with Xylaria polymorpha . 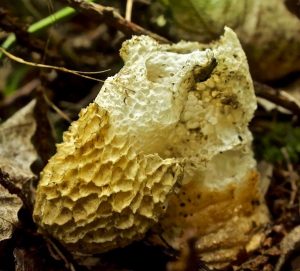 In the folk vernacular of the British Isles, the stinkhorn has been known variously as Carrion Flower, Devil’s Stinkpot, Devil’s Horn and Satan’s Member, in reference not only to its shape but to the halo of flies drawn by a rancid stench akin to well-rotted meat exuding from the viscid, verdigris ichor on its conical head, known as the gleba (see one on the image above). Such buzzing swarms are the means by which the stinkhorn disperses its spores, as they get stuck to the flying insects’ legs or passed through their digestive tracts. Once the fruiting body has fulfilled its purpose and the green spore-holding slime has worn from the honeycomb pattern of the cap, the whole structure collapses and rots back into the earth.

If you can stand the fetid stink enough to get nose down to the ground for a decent close up, structurally speaking these are actually rather fascinating. 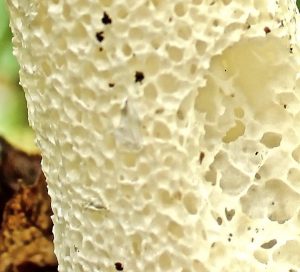 The stem is hollow and made up of a light spongy material something like a bathtub loofah. The fungus emerges from a large white egg lined with a gelatinous substance a bit like the aspic in a pork pie. The egg lies just below the leaf-litter, its top poking above the forest soil. As Evans and Kibby explain in their Pocket Nature: Fungi, if dug up, taken home and placed on a damp tissue and under a jar, it will hatch in a matter of days. The speed at which the shaft grows after breaking forth from the top is phenomenal: a rapid extension of about six to eight inches in two or three hours was reported as early as R.T. and F.W. Rolfe’s fascinating 1925 work Romance of the Fungus.

One would have thought the smell would be enough to turn the stomach of even the most adventurous would-be gourmand, but apparently the unhatched stinkhorn eggs have been eaten since time immemorial. Presumably their referencing as witch’s or devil’s eggs would have limited their appeal somewhat, but in any measure, if one is going to go down this dark path, it is worth remembering that many highly poisonous Amanita species, such as Death Caps, Panther Caps and Destroying Angels, also emerge from egg-like sacs. 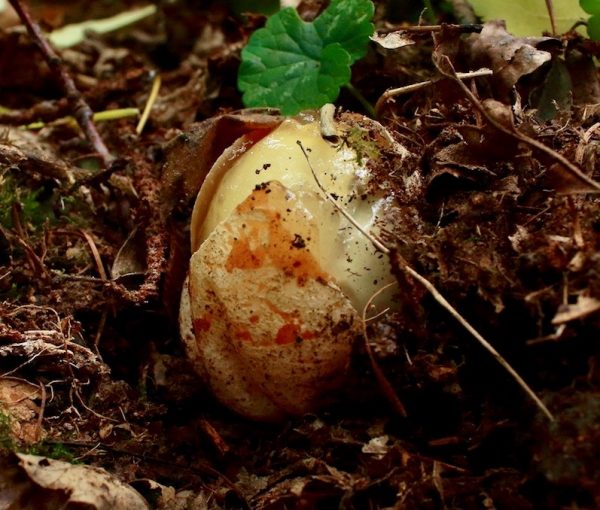 The actual hatched stinkhorn itself might hardly seem worth the bother, its cap smelling as it does and its spongy stem so light and immaterial. 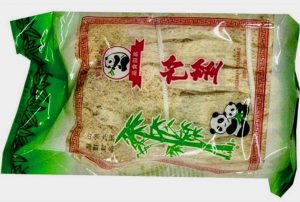 That said, several years ago in a supermarket in London’s Chinatown I did come across a packet of strange dried things labelled ‘Bamboo Fungus’ (zhu sheng or zhu sun). After soaking for about an hour, they basically developed a light gossamer-like texture. By the time they were integrated into my stir-fry with other mushrooms, they didn’t make much of an impression in terms of flavour, although this texture was admittedly something unique, and no doubt the fungus has valuable health-giving properties. I link to it here for the curious….   This Bamboo Fungus turned out to be another member of the stinkhorn family, Phallus indusiatus; indusiatus apparently means “wearing an undergarment”.  It is also known as the Long Net Stinkhorn, Crinoline Stinkhorn and Sun Penny Mushroom and most commonly the Veiled Lady mushroom. Confusingly, the species is also referred to as belonging to a separate genus, as Dictyophora indusiate.

This Veiled Lady is native to Asia and the Pacific and has never been found in the British Isles – hence the photo here is borrowed from the Wikipedia entry. In its natural undried state, it is actually rather beautiful, like a Common Stinkhorn but with a dramatic net-like veil cascading down from the head and surrounding the stalk. “The crinoline feminizes the phallic effect a little,” writes Money, who uses the species as the cover photo for Mr Bloomfield’s Orchard.    There is at least one other point of interest to the Veiled Lady beyond its distinctive physical appearance. A 2001 study in International Journal of Medicinal Mushrooms  about a Hawaiian Dictyophora variant discovered that while men found its smell as profoundly unpleasant as any other stinkhorn species, six out of the sixteen sample women self-reported being overwhelmed by spontaneous sensuous spasms upon sniffing

The results of the Hawaiian Dictyophora experiment are considered quite controversial, and have never been replicated in a scientific environment. They have certainly never been replicated with any of our homegrown varieties, which also include the thicker-capped dune-favouring Sand Stinkhorn (Phallus hadriani), also distinguishable by the lilac tinge to its egg, and Dog Stinkhorn (Mutinus caninus), with its much slimmer yellow-orange-tinged shaft and more pointed tip.  Apparently these can be distinguished by the subtle differences in their aroma too, if you have the nose for it. 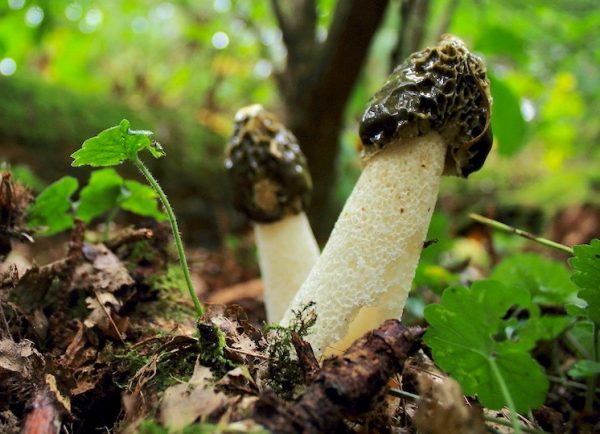 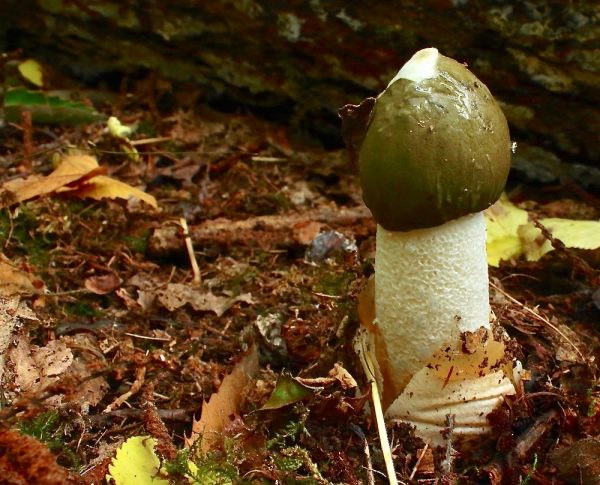 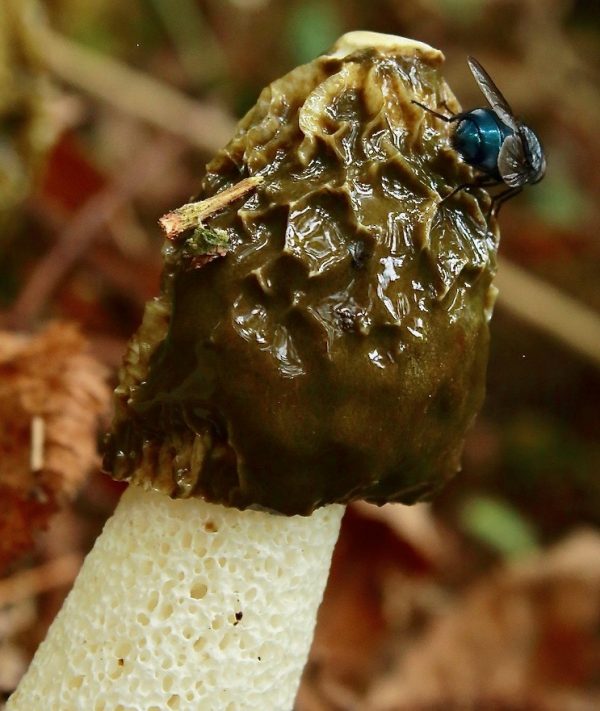 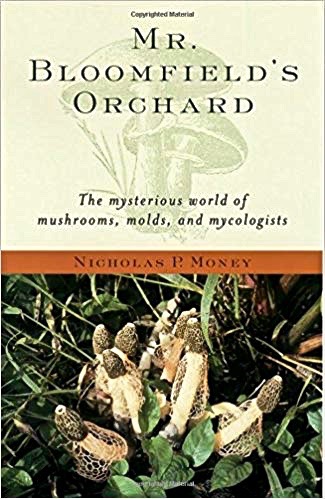 Thanks to Ajaykuyiloor (from Wikipedia) for the image of the veiled lady mushroom.